The name PORSCHE and Fire Island have becomesynonymous. She is more
then a queen…she is a female impersonator, an entertainer, a TV star, a singer, an actress, a comedian and so much more. She has a huge following, and all of Cherry Grove disappears into the Ice Palace when she is performing.

Porsche is known throughout the United States and is the official Queen of Key West, in addition to performing all over New York City and Long Island, fortunately for us at The Bunkhouse as well. She co-starred on the “Wanda Sykes Show” and just MC’d the festival in Asbury Park. She can be seen all summer at the Ice Palace, so do not miss her!

Besides all her fame and talent, Brant (aka Porsche), is a great person with an awesome personality. I have known Brant for nearly 10 years now, and I feel more then blessed to consider her my friend. I am also very privileged to be able to do this interview and share her with the world.

So give us a little history of yourself: Where were you born, raised, first time you wore heels. Well, I’m only 34, but I have quite the history. How long do you have? To keep it brief, darling, I was born on Christmas Eve and raised in Austin, Texas, mostly on the floor of a dressing room at Neiman-Marcus. I wish I was kidding, but that was the first time I tried on heels. I believe they were Bruno Magli strappy stilettos, if memory serves me correctly. My mother wasn’t happy. Not that I had put them on, but that she had not worn them yet. Whoops. That was my first lesson in drag etiquette.

How was PORSCHE created, and how’d she get her name? I had been singing and doing theater for years by the time I moved to NYC for college. I was at karaoke one night at Pieces in the West Village when Bob Estey, the owner, approached me and asked if I had ever done drag. I said yes, and then I panicked. He said he wanted me to be part of a Pride show there, I agreed, and then realized I had no drag name. Panicked again.

The next day, a group of my friends and I decided to find a good drag name for me. It was a gorgeous day on Christopher Street, so we communed at The Duplex. Four pitchers of frozen margaritas and about 75 rejected drag names later, one of the boys chimed up and said, “Screw it! We’re naming you after the next car that pulls up.” It was a Porsche. I said, “Why not, I’m never going to do it again!” Again, whoops. I could be named Buick Skylark, or something with numbers, so I feel very lucky. No queen in life gets booked as much as you. How does that affect your personal life? I feel so blessed to be booked as much as I am. I am so lucky, but I also have worked and continue to work very hard for those bookings. Show business IS a business, girl! A lot of queens today just expect bookings to be thrown at them without a cohesive show or product. It doesn’t really work that way. There are a lot of us that get booked all the time, and it is a fantastic sorority to be a part of. Lady Bunny, Sherry Vine, Shequida, the insanely talented Joey Arias, just to name a few. We work all over the world, yet we know what works for our audiences, and those audiences know us. Part of that recognition includes traveling…a lot. The grueling part of glamour, I guess. Does it affect your personal life? Yes. Would I trade it? No. I have no problems being in three different cities in one week. Honestly, it’s exciting! One day you are in chilly, snowy New York, the next day sunny Key West, the day after that, ironically stunning Pittsburgh! You never know. When it comes down to my very personal life, yes it is difficult to find someone that can deal with it. By all logic, I should be dating a pilot for United. He could take me anywhere I need to be! But I do have a very special person in my life that can handle it, and that makes me happy. Very happy!

Being the official queen of Key West, Fire Island, Texas, etc., you have developed almost a cult following. What’s your exact thoughts on that? Well, that all goes back to travel again, doesn’t it? I guess I am a gypsy at heart! Wherever people want me to be, I will be. Whenever I find a magical place that I have the opportunity to perform in, I immediately want to go back, and make arrangements to do so. The biggest honor of having people enjoy the tom foolery I put on stage is that people find me no matter where I go. Make no mistake, I LOVE seeing people pop up in the most random places. I guess I have become somewhat of a tourist attraction, a point of interest, like Goofy at Disney World. Girl, everybody wants a picture. One of the reasons I love The Ice Palace and Fire Island the most is that I don’t have to travel. They get to come to me and have a great time in Cherry Grove! What could be better?

How did Chuck and yourself hook up, and how long have you been together? Well, there was that one time that we made out the first year we met each other, but then we realized that is only legal in Arkansas. Oh! You mean how did we start working together? That happened in Key West in 2005. He was a bartender there and I needed a fill-in DJ for one show at Bourbon Street Pub. That first show we did together convinced me that I never wanted to work with anybody else, ever again. That spring he joined me on Fire Island and we have never looked back. The chemistry we have together is so rare, and I sincerely think that is why everybody, especially queens, love working with him and fight for him to do their shows. We have done literally thousands of shows together, all over the world, and I could not ask for a more professional, instinctual counterpart. He is the Steve to my Edie, the Captain to my Tennille. And he travels well!

You were the first gay sidekick ever in the history of TV during the “Wanda Sykes Show.” How fun was that, and how do you think it affected your career? Well, I’m not sure if I was the first ever gay sidekick, but certainly the first one that was hired as a drag queen on latenight television. How much fun was it? I was working with Wanda Sykes. It was a BLAST! That amazing lady changed my life in so many wonderful ways. She is absolutely what you expect. Hilarious and a comedic genius. I learned so much about comedy and about the process of television. It was not a reality show, so offices, writer’s rooms, studio audiences and the amazing cavalcade of guest stars made for a very interesting experience!

How often in your life do you get to show up to work at CBS Television City, where they taped “The Carol Burnett Show,” “Dancing With The Stars,” “The Sonny and Cher Comedy Hour” and “The Price Is Right”? How often do you get to run into Craig Furgeson in the hallway and he says “Hey, Porsche, how are you today?” when you are not even in makeup? How often do you sit down in the makeup room and realize that you are sitting between Betty White and Tom Bergeron of touch-ups? How often do you get to introduce your mother to Tommy Lee? It changed my life for the better. The exposure was fantastic. It gave me a boost in bookings, certainly. Most importantly, Wanda and I became even closer. I adore that woman. And yes, I got to spin the wheel.

What’s your favorite thing about Cherry Grove? The sense of community! I have been coming to Cherry Grove for over a decade now, and it always feels like home. Like a family. The Ice Palace has always been a fixture on Fire Island, and I love that I am a part of it. When you meet amazing people that become your family even when summer comes to an end, you know the magic that is Cherry Grove. I love The Pines, too, but give me the Grove!

Who were or are you most influenced by? I am most influenced by my audiences, and performers in general. That organic interaction of a live audience is something you can never put on camera or capture again. Once that show is over, it is over, and will never be repeated again. That is the fun part of being an entertainer.

If you could go back and change anything in your life, what would it be? Honestly…nothing. I have made mistakes along the way, but everything works out in the end. That sounds like the most cliche answer, but it is true. I have learned so much along the way from any mistake I made that I do not regret a moment. Of anything. Thank goodness I have been able to roll with the punches and embraced it. Life has been an amazing ride so far.

Can you give any of our Bunkhouse/ Fire Island baby drag queens any advice? Keep working, keep thinking. Oh, and never have too much attitude. A lot of new queens confuse attitude with talent. It is completely unnecessary. Do what you do and have a great time. I know for a fact that people don’t get booked because of attitude alone. If you are going to be a difficult bitch, it will be a bitch to get jobs. Never confuse bitch with humor, either. THINK! Everybody deserves and gets a chance. But RuPaul is right… “Don’t F@*K it up!”

Where can we see you in the near future? I will be at The Ice Palace all summer long! Friday, Saturday and Sunday! Friday nights are at 9:30 p.m., Saturdays are at 11 p.m. and Sundays are 6:30 p.m.! And you never know who the guest stars will be! Maybe even a a few of the Bunkhouse/ Long Island queens! Haay! 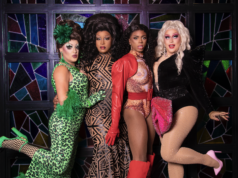 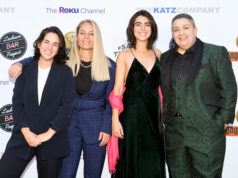 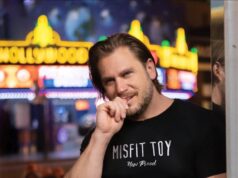 On Point With Hans Berlin