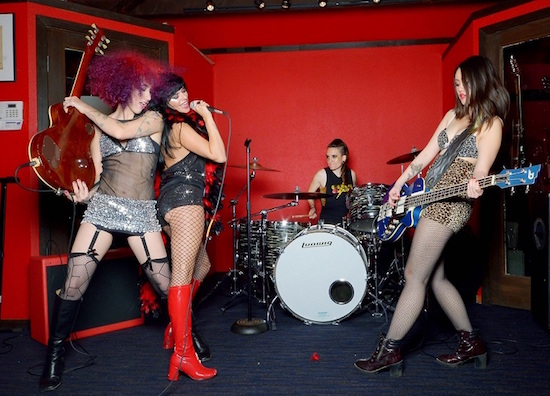 Emerging from the inside of a sparkle and a rainbow, this refreshing, high-energy, punk/pop, all-girl, puissant and compelling new faction has taken audiences by storm as they open for pop icon Adam Ant on his North American tour.

The glittery members of the band include Ali Cat, the vivacious, outgoing and sexy lead singer; Veronica Volume, the colorfully adorable guitarist (whose dad just happens to be one of the members of Hollywood Vampires with Alice Cooper, Johnny Depp and Joe Perry); Millie Chan, the beautiful bass player; and Cassie Jalilie, the pretty and energetic drummer.

With a very special energy, unique only to them, the girls spoke to Get Out! about their new release, “Glitter City,” their experiences thus far on their first big tour and about their dreams, hopes and desires. 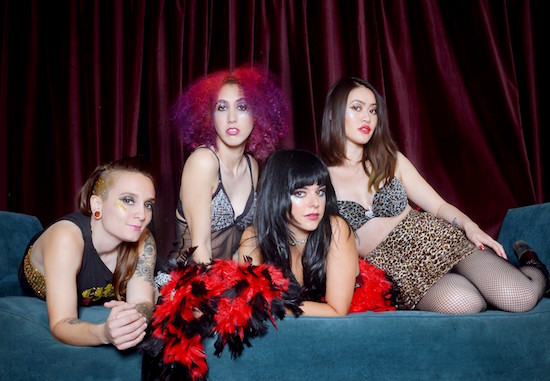 What kind of experience are you having thus far on your first huge tour?
Ali: Fun. We’ve played several shows with Adam and one on our own, but we love to travel, on the road, meeting people. We’ve been having an amazing time. We all love each other. We’re all friends, and that helps.

Cassie, you’re the newest member. How did that happen?
Cassie: Millie and I have been long-time friends. We’re both from San Francisco. We moved to LA to pursue music, and she joined this band. So they needed a drummer, and we were friends, so…

Veronica: We are all in an all-girl cover band, and my dad heard us rehearsing in his studio. Then we were talking about this tour, and he heard that we needed a drummer, and he said, “Well, what about Cassie? She sounded great that day when you were practicing.”

What is the most fun experience that stands out for you so far?
Millie: Meeting Adam.

Veronica: Meeting all of the woman after the show, because we had all these cool women [with] empowering signs. They wore hot pink, and we brought them with us. Then all of these women started coming over to us and wanted to take pictures with us.

Ali: The best experience for me was after the show, getting to meet all the new fans and supporters. It felt wild signing dozens of autographs on the album that we worked so hard to create. It’s great to see that “Glitter City” has made such a powerful impact.

Cassie, you’re the only gay member in the group? How does that work for you, traveling with an all-straight band who just happen to be girls?
Cassie: Yeah. What’s cool is that they’re all really supportive, plus they know I won’t try to make any moves. [laughs]

Ali: We all identify with the gay community.
Cassie: It’s a lot easier for straight people. But I love these guys. I feel totally comfortable.

Millie, when is the last time that you did something for the first time?
Millie: I just got back from Sweden, so seeing the snow. I’ve never seen snow in my whole life, being from California. I went hardcore, midwinter in Sweden. I’ve never been in snow. I’ve never gotten hit by snowball. It was my first time.

Is there a particular song that raises some kind of emotion in you?
Ali: Any Queen song. I get very emotional. My favorite Queen song is “It’s Late.” Whenever I hear Freddie sing, I cry. When I first found out he died, I bawled. I was watching a documentary, and at the end of it they said he passed away a long time ago. I said, “WHAT!”

Cassie, who do you envy?
Cassie: I wouldn’t say that I really envy anyone. I look at that as kind of a bad thing. For me, my whole outlook on life is you have to go for it, and you have to work for it. Musically, I want to be the best that I can be. I always strive to just get better. I strive to keep learning and to never stop. I never want to limit myself as a drummer. There’s definitely people that I idolize, and I want to be like, so I think to myself, what do I need to do to get there?

Who’s your idol?
Cassie: Travis Barker. Aside from music, I read his book, and I love his motto: “Can’t stop, won’t stop.” That’s what I pretty much live by.

Veronica: Definitely David Bowie! He’s been a huge influence on us, and we definitely tried to channel his glam energy into our album “Glitter City.”

What kind of impression have you left thus far on the Earth?
Veronica: I definitely left more glitter across this country at this point than probably anybody else has! Also probably pieces of my hair. I leave a lot of hair dye in bathtubs. I leave a lot of color around wherever I go.

Is there a moment in your life that you’ve had that has changed the direction your life was heading?
Veronica: Probably starting this band. It has been such an important part of my life. I’ve tried for almost 10 years to put an all-girl band together. I thought it was going to be impossible. I went through so many girl musicians and just thought I’d never be able to do that. Being in a group of girls like this, where we can actually do what we love and have the opportunities we’ve had, has probably changed my life the most.

Millie, would you rather be liked or respected?
Millie: I’d rather be respected. My whole life I’ve been worrying about whether or not this person or that person likes me. I’ve always been different, and I realize that I’m going to do what I love. If people don’t like it, I don’t care. I think people tend to respect that more when you are doing what you love. I tend to idolize people more when they are respected.

Cassie, same question.
Cassie: I would have to agree with her. I would rather be respected, and especially for me, this is the first time I’ve ever played with female musicians. I’ve been playing music for 13 years, and I’ve always been playing with guys. All the shows I’ve ever played with, I have been the only female. It’s cool to have people come up to you and say, “Oh, you are cool for a chick,” but I don’t want to be known for that. I don’t want to be known just because of my gender. I want people to respect me for my musicianship, not for the fact that I’m a female. I just always felt like the drums were different. I found my voice with the drums.

Veronica, are you proud of the person that you are, and would you introduce yourself to your family and friends?Veronica: Yeah, I’m proud of the person that I am. I’ve worked very hard to do what I want to do: playing music for 13 years, hauling my own gear, booking my own gigs. I’m not only proud of myself, I’m proud of all four of us, where we are and how far we’ve come. If I weren’t myself, I think I would introduce my friends and family to me. I’m not that scary.

How does your personality come forward in your work?
I think that my personality is mostly fun loving, and I think that comes across on stage . I am mostly a positive person who likes to have a good time. My goal is to get people to let loose and just go wild with me. But some of the more intense moves or actions I do on stage come from a character within. When I’m on a stage with lights and these girls playing loud rock ‘n’ roll, the music takes over me, and who knows what will happen!

What dreams are you sitting on, and how clear are you on why you’re sitting on them?
Millie: I’m not sitting on any dreams. I’m lucky to be living it with the best people that I know!

What was the turning point of your life, Cassie?
Cassie: When I made the decision to move to LA. I’ve lived in San Francisco my whole life, but I felt that I wouldn’t progress any more as a musician. This is all I want to do, like Millie said. When I left I was living in a garage for a couple of months, with no friends, nothing. It was super depressing. I was crying, it was terrible, but it actually wound up being the best decision of my life, because it opened up so many opportunities. Now I can see my dreams are coming true.

I usually don’t ask this, but are you all single?
Cassie doesn’t mind. Put it out there.

Watch for these girls. They will be making musical history very soon!
Glam Skanks will be performing at The Monster on Friday, February 24, at midnight. 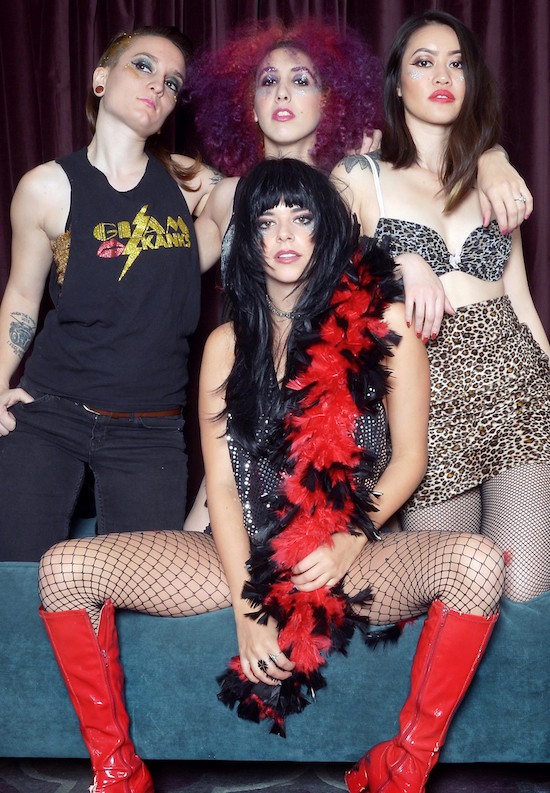 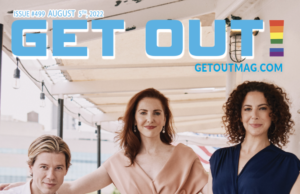 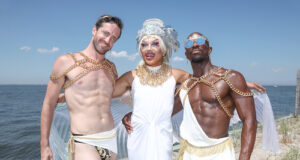 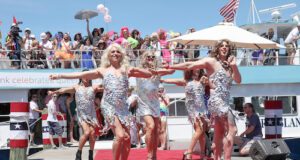 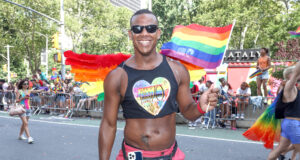