The celebration of the Birthday of the Karaoke Queen of New York City Jackie Dupree is set to take place along with a second video launching of “I Don’t Want You No More”, back by popular demand, at Boxers HK, this Tuesday at 8Pm. Guests will include: Chris Weaver (aka Nedra Belle) from last season’s The Voice, Spicky Hilton, Saline Soulution, and Octavia Anyae. The festivities will be DJ’d by the fabulous Stevie Sidewalk. It will be followed by Jackie’s usual Karaoke. Boxers is located at 742 9th Avenue in the heart of Hells Kitchen, in New York City. 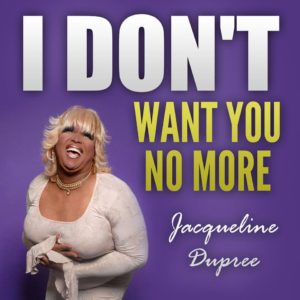 I spoke with Miss Dupree during the snow storm as she prepared to travel to Sweet Bar for Karaoke, in hopes that a cab driver would give a lady a hand as the snow continued to fall relentlessly. It’s difficult to wear heels during a snow storm, however that is true dedication!

I’m excited that Spicky Hilton will be performing. Have you heard her in person?

I practically groomed her! She’s the first person I took on as my drag child. I took her in because she does the same thing I do, she sings live. I took him under my wing because for two years straight he would come to my Karaoke every Thursday. Once I saw that dedication and he told me he would love for me to be his drag mom, I said, “Yes I will”. Then he got hired on Fire Island after only one performance.

You go back with all those Fire Island queens, don’t you?

That whole crew were under-age minors when I met them working at Heaven, and I did not know that. That’s how I met Logan, and Vinny, the dancer. Then we all got older and we dispersed. Spicky told me that they were all under age at the time. Thank goodness nothing bad ever happened. I’m glad we are all successfully doing our own thing now.

So you will be once again by popular demand re-premiering your new song, “I Don’t Want You No More”?

Yes. I’ve been getting some good reviews on it.

It was played on The Jimmy Star Show With Ron Russell yesterday.

Oh, I hope some of the viewers enjoyed it. I just learned how to do Instagram and found over 600 people trying to follow me because of the video. I’m trying to start the New Year out right and will be posting some videos on my Facebook page.

Well “I Don’t Want You No More” is a really cool video.

Thank you, I’ve been getting a good response on it. Gotta get it out there!

Well you have a great Birthday and video launch.

Stevie Sidewalk will be the DJ that night at Boxers, and with the help of my guests it should be a great night….