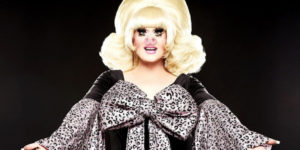 This Sunday at 5pm, America’s favorite sow in a smock will perform her hit comedy show, Pig in a Wig, at the drive-in theatre at Westfield Garden State Plaza in Paramus.   “Don’t bring the kids!” she warns.

While some drag queens read children’s stories, and others, like RuPaul, give self-help advice, Lady Bunny’s celebrated act is filthy, demented and 100% hilarious — right when we all need a good ol’ belly laugh the most. 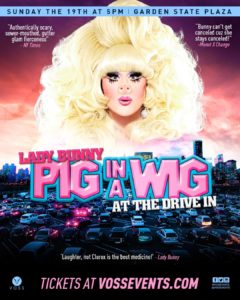 Expect lots of brand-new material and some raucous classics so old that only the dead will recall it. Throw in Bunny’s notorious one-liners, costume changes, go-go dancing and her Laugh-In-style joke routine, and you’ll chuckle all the way home with plenty of new jokes in tow to unleash on the work gang, whenever they are gathered around the water cooler again.