“It’s as if Major Lazer and Ace of Base had a love child,” says Bielfield about “Dance Again“, his new high-energy club track with Courtney Act.

Bielfield is the dreamy, blonde-haired, blue-eyed – and now, mustached! – American opera tenor with a five octave range, who was trained at Juilliard and has performed in productions with the New York City Opera and The Metropolitan Opera.  He left New York three years ago for Australia to pursue to a pop career.

He says he first met Courtney Act last year, backstage at a music festival. “I immediately knew I needed to work with her,” he remembers.  “A week or two later, we came face to face again, at a concert, where she introduced me to the stage.  After the show, I invited Courtney to a Mexican restaurant, got her wasted on margaritas, and I charmed her into joining me in the recording studio.”

The result is “Dance Again“, a song about getting over a lost love that is both heart breaking and sweat inducing.  Written by Bielfield and Courtney Act and produced by Bielfield and Jhay C, the track mixes modern electronic elements with retro sounds to create a unique club sound all its own.  Listen to it now: 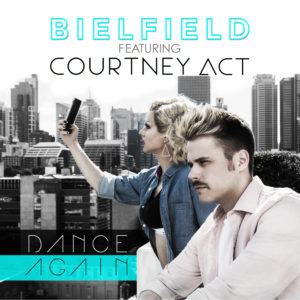