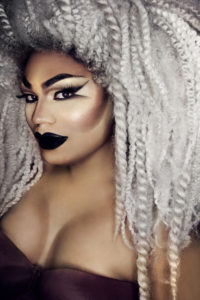 For Brita Filter, seeing herself on stage was always going to happen. From early beginnings in musical theater to touring with shows like Cinderella to being featured on Saturday Night Live with Katy Perry and a gaggle of her New York City sisters, this Broadway baby has only just begun! Between her packed show schedule all over New York City, Brita sat down to chat with me about how she got started in drag (she has two drag mothers!), getting inspiration as a queen, and what is was like getting to recently pay homage to some of her favorite Broadway legends!

My favorite performances always include dancers, fierce lighting, and special effects of some kind. They also MUST tell a story. My favorite number I’ve created is called “Don’t Mess With Brita Filter!” After my performance on Saturday Night Live, there was a lot of gossip around town about me. I felt the best way to confront these rumors was to make a number about it. You can watch it here!

My two Drag Moms (they share custody) are Lauren Ordair and Ari Kiki. In the beginning, they really took me under their wings and introduced me, not only to the glamour and eleganza of drag, but also to the importance of giving back to our LGBTQ+ community.

The first drag show I went to was Paige Turner’s SLURP! at Vlada, and from that moment, I was in awe of drag. I also loved seeing Bob The Drag Queen every Monday at Barracuda way before Drag Race snatched her up. I learned so much from watching her work the room. Going to drag shows is essential if you want to be a great drag queen! Find the people who inspire you the most! 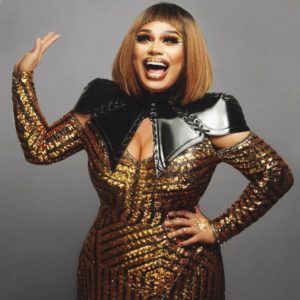 What are some of your career highlights so far?
I feel like my career really exploded after performing with Katy Perry on the season finale of Saturday Night Live. Shortly after, I was asked to headline London Pride with Impulse Group and was cast in a twelve episode reality television series called SHADE: QUEENS OF NYC on the Fusion Network.

I’m so lucky to have performed internationally and on television, but winning the GLAM Award for Entertainer of the Year has been my career highlight. This award is voted on by people working in queer nightlife, and that’s why it means so much to me. I started drag because I love performing and creating my own art, but I found my true passion came from connecting with those within my community. Sometimes, you have a shitty day and you really need someone to help you laugh/escape for a couple of hours. I love being that person for my community. 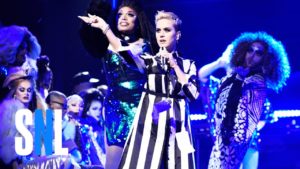 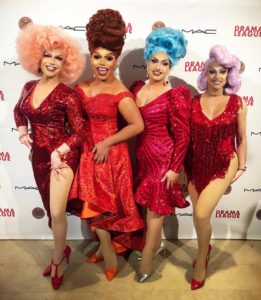 You just performed at an amazing event for Nathan Lane and were featured with some truly legendary people. Tell me about that experience.                               I was truly honored to perform amongst Broadway legends. When I was a young musical theatre actor, I idolized Norm Lewis (B’way: Once On This Island, Miss Saigon, The Phantom of the Opera), and there I was backstage in full drag, cracking jokes with him, and drinking champagne. I always knew I would work with him, but I never thought it would be while I was wearing orange high heels. It was one of the coolest experiences of my life, and I was so honored to have been asked to give tribute to Nathan Lane, a gay actor who has also inspired me immensely.

The gay community has had a very trying year and politically things are very dark. What do you think are the biggest issues facing our community and what do you see as your part in helping to address them?                                                           I think the biggest issue we’re facing is the current administration’s full-scale attack on transgender rights. I started drag because I love performing, but now that drag has become more mainstream, I’ve been given a platform where thousands of people can see me: from my weekly shows, to television appearances, to my social media presence. Besides speaking up about these horrible acts and attending resistance marches, the most important thing I can do is tell people to VOTE, and to register to VOTE. We have to turn Washington blue to protect our LGTBQ+ rights.

Most importantly’-where can people see you perform?!
You can get updates on all my performance and appearances on my Instagram at @thebritafilter.