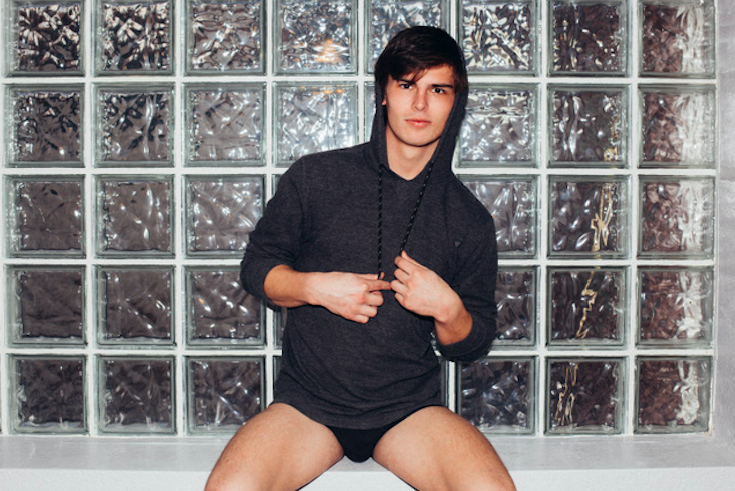 Mr. Hollywood
Helix Model Seth Peterson is the quintessential LA man. He skates, he surfs and he is ready for his close up

Seth Peterson is the ultimate showman. The moment his director yells action, the captivating twenty-year old Helix model shines with a confidence rarely seen in young adult film stars today. Peterson doesn’t just strip, he swags, playfully flirting with the camera, shooting his come-hither eyes and flashing his megawatt, million-dollar smile. “Being on camera is my biggest turn on,” he admits.

It may be because Seth Peterson grew up only forty minutes from Hollywood in Redondo Beach, CA. He calls Sherman Oaks home now (even closer to Hollywood!) and remains the typical LA guy. He surfs, skates, lives for hanging out at the beach with friends. But there’s more to Seth Peterson; lots more as we learned when we caught up with him on the set of the new Inside Helix series, available on YouTube.

What celebrity are you often told that you look like?
Seth Peterson: Tom Cruise.

Really? I would have guessed Taylor Lautner.
I get that sometimes but I more often hear Tom Cruise.

How did you become a Helix model?
I reached out to Helix on social media and I was told to apply online. I did and soon after, I was interviewed and soon after that, I got a text saying I had been chosen.
If you could switch
lives with someone for a day who would it be?
Ilana Wexler from
Broad City.

She works as a sales rep and is usually unhappy because she barely does anything while at work.
But she’s free spirited and smokes a lot of marijuana.

What is your dream job?
I would love to be a professional sailor.

Next question. What job would you never want to do?
Garbage man.

What’s your favorite way to chill?
On my couch, watching a movie or binging on House M.D.

Favorite body part to work out?
My abs.

What would fans be surprised to learn about you?
I’ve played the piano since I was five.
If you met your dream man tomorrow, would you marry him?
No.

What’s the most important thing you look for in a guy?
That he is considerate.

Do you prefer he be hairy or smooth?
Smooth.

If you could go to any concert, who would you see?
Tame Impala.

Who?
He is a psychedelic rocker.

What’s your nationality?
I’m half Mexican and half Caucasian (a little French, Scottish and Irish).

Are you bilingual?
No.

What’s the best gift you’ve ever received?
My car. My Grandpa gave it to me.

What’s the best gift you have ever given?
I gave my ex-boyfriend a new skateboard. It came in handy because, in Los Angeles, we often have to park really far away from home. It saved him some time.

When did you come out to your parents?
When I was 15.

How did they react?
They were pretty supportive.

How did they react to your being a Helix model?
I haven’t told them yet.

Do you get recognized on the street for being a Helix model?
Not really, no.

What’s your favorite thing to do when you go back to your hometown?
Surf and spearfish.

What are you passionate about?
Trying new things.

Not really a breed, but ok. You are stuck on an island, naked and afraid. What is one thing and who is the one person you would have with you on the island?
A typewriter and Stephen King so he could write me books to read with the typewriter.

If Hollywood were to make a movie of your life, what would it be called?
Dazed and Confused.

What’s still left to do on your bucket list?
I’ve yet to sky dive and I would love to travel more.

What is the meaning behind your arrow tattoo?
It was kinda just my first tattoo and I thought it would look good.

And the turtle on your bum?
I got that one after reading Stephen King’s “It” because it represents God. Later I realized it can also be viewed as a caution sign to go slow when I bottom.

Does size matter?
Kinda, too big can be scary.

What is one thing you can’t live without?
Toilet paper.

Where do you like to take a guy on your first date?
The beach.

Favorite part of a man’s body?
His butt.

The Helix performer you most want to shoot with?
Alex Riley.

What one word describes you best?
Amenable.

When was the last time you truly splurged on yourself?
When I bought my new phone. It was expensive.

What’s the craziest thing a fan has said to you?
Let me fly you to Dubai.