This 4 Tat, is an exalting new contemporary remedial discovery that is nothing short of a revelation. The product offers the temporary, but full and complete painless cover-up of any tattoo you might need to conceal for professional, cosmetic, or personal reasons. This then furnishes the consumer with the freedom and privilege to obtain even more indelible self-expressions of orgasmic patterns, artistic bursts of dragons and fairytales, tribal effervescence or meaningful legends, without fear of regret or remorse.

Tattoos have become an artistic, fashionable and addicting revolution. However, often tattoos can become the object of concern, such in the instance of what happened to inventor of “This 4 Tat”, Jimmy Quill. As a Hollywood rocker Jimmy received his first tattoo in the mid-eighties, a time when ink had a bad boy connotation. His colorful, and massive dragon covered half of his back. Eventually after procuring a talent agent, Jimmy was offered commercials and found them to be extremely profitable until he was asked to do a shoot for a national restaurant on the beach and shirtless. After being cut from the commercial for having his enormous tattoo, the loss of revenue and the fact that even a professional make-up artist couldn’t completely cover the tattoo even with airbrushing, he began to question why there wasn’t a simple remedy for his situational tattoo.

Although we all love our tattoos and wear them with pride forever, sometimes a certain occasion dictates the need for a temporary cover-up. As Jimmy Quill reminds us, “Face it, first impressions are everything”, as are court appearances, job interviews, formal affairs, weddings, and meeting a loved one’s parents for the first time.

I had a unique and in-depth conversation with Jimmy about his inexpensive, empowering, lightweight creme base, tattoo cover up, that can be done while on the go in four easy steps. It can be purchased at: www.this4tat.com .

How did you come to invent this magical product?

We have a This 4 Tat van and we’ve been traveling just introducing the product, and it has been insane! First of all it’s so crazy because kids just don’t get their ears pierced anymore when they turn 18. They get tattoos. I love tattoos. I’m completely supporting the freedom and the artistic endeavors to do whatever you want. I’m down for it. It’s crazy because there is no market for the product because it’s considered makeup. Especially for a guy that’s going after the point of view that I’m going for, when they want to cover themselves just for work to make more money. I just came up with it about 6 or 7 years ago. I met the creator of Bio-Freeze™ Danne Montague King. I wanted to know what would happen if I did a tattoo cover with a silicone base cream that he came up with, something that would actually stay on, and you have to really wash it off, something that you can really cover a tattoo with….he said it would never happen. I kept bugging him. Eventually we went back and forth over 7 years and worked on a process by trial and error and figured it out just to a point where you don’t need a makeup artist. This is all about you. 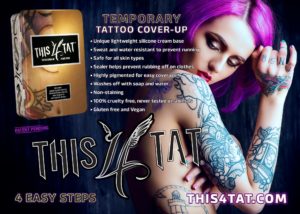 So it temporarily covers a tattoo?

Yeah. It takes four steps. That’s why I came up with this title, This 4 Tat. Basically it’s 4 steps, you don’t need a makeup artist, you can do it yourself. It kind of came down when I saw a kid with love and hate on his knuckles. I’m from this rock point of view so nothing is going to shock me. I was looking at this kid with long blond hair and he asked, “what do you think man”? I answered, ” You know what I read….minimum wage”. He asked me what I was talking about and I answered, ” Yeah dude, you put them on your hands, you’re 17. You need a job. You’re screwing yourself and limiting yourself and I wish that I could cover it temporally so you can go to work, make $15 bucks an hour, and then go wipe it off and play like a rockstar”. I always seem to say those kind of things. Now I have invented a product where people can do that, and it’s not for people who just want to cover up, but for people who are just sick and tired of talking about their tattoos. Especially weddings. My wife is a huge wedding planner. When there’s a wedding and people have too many tattoos and your just trying to gear your attention to the bride….. so now it’s out and the product is for sale.

This product makes me excited because I’ve always wanted to get Adam Ant’s signature tattooed on my arm, but I didn’t think a tattoo on my arm would be feminine enough for me. Now I can do it.

Not only is it going to be so cool for you, but you will call me up and tell me “It’s almost like the opposite….it’s like having a tattoo. You are so used to having it, it’s permanent. It’s almost like putting your hair in a ponytail when you have long hair. This is not for people who don’t have tattoos. So people see me driving this van, and this is a hard sell for me because they see this guy half covered with tattoos. They think I’m a tattoo artist. The attention span for reading anything, people just don’t do that. They think I’m a tattoo parlor. But I saw this kid with Richard Nixon on his leg. Why would he pick Richard Nixon? It’s like getting a bad haircut. Thank god I love Adam Ant and so do you. So I don’t know if it’s important but let me tell you a little history about myself. When I was growing up, Cher was like my mother. She calls me her son. Can you imagine, I grew up with Cher? She had tattoos everywhere, she was just like one of us. Her son Elijah was my best friend. He had a dog bone on his wrist, and Chaz had tons of tattoos. Chaz was in my wedding as my best man. He knows everything about this product. Chaz was my deepest supporter in this because he was a perfect actor, wanting to be sort of a Chameleon. He needed to cover his tattoos.

To have a tattoo removed by laser is very expensive and very painful. Your product opens up a world of possibilities for people like myself who will now proceed to get as many tattoos as I want, wherever I want. One day it’s there and the next it just disappears, how cool is that?

It’s actually a creative thing. That’s the thing that I’ve been trying to tell people. This is just a staple. I’m not putting you down. My whole slogan is kind of like, ” party all night, work all day”. I was just trying to come up with these ideas so that people would get it. You can totally have your tattoos but there is a time when it is covered. I got a Patent Attorney. He’s straight as shit. He’s kind of not getting it. I look over and I see in their law firm this girl’s sleeves, completely covered in tattoos. I asked him if he hired her. He told me no, that she was the niece of his law firm’s partner. I asked if she were a good paralegal. He said that she was the best one they’ve ever had. I then asked him if he would’ve hired her on her appearance. He told me absolutely not. He was upset as to why she was even in there at first. I said to him, ” You mean to tell me she’s the best paralegal in the office”? He said yes and I said, “Here’s my product”. He would have hired her if she covered up her tattoos. This is the straight world that people still live in. It’s not my world, but there is that world……I look at Mick Jagger, and I wonder why he doesn’t have any tattoos. He’s just that kind of guy. If you got a tattoo before 1985, you were a real rebel. There is a funny story with Slim Jim Phantom and Brian Setzer. 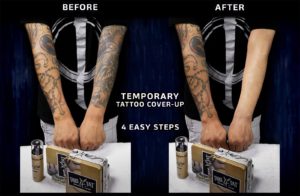 They are from Long Island. They were Long Island kids, Lee didn’t get one because he was Jewish. His mom wouldn’t let him get it because you can’t be buried in a Jewish cemetery with a tattoo. So the other two went down and got tattoos and didn’t even know where to put them. “We put them on our forearms” he said. He told me when they went to school people were walking away from them. Two years later they were opening up for The Rolling Stones in England and all the Teddy Boys would be lining up. They loved them. In that era, The Stray Cats were such stars, but that tattoo image created that vibe. You had to earn your tattoos. Jim earned them. There are certain people who wear these tattoos and you look up to them, so I’m not putting down tattoos. I just want to help certain people temporarily. Help them in life with just like just one occasion.

For me this product isn’t about covering up, it’s about getting more.

I get that because we’re artists and we know what we want. Having Adam Ant on your arm makes me want to put you as one of my favorites on my phone, because I long for people like you. This product is really super affordable, I just want to get it to a place where it becomes a staple, and it’s just like you said, people can get whatever they want. This is just an opportunity to maybe cover something up if you feel like it. 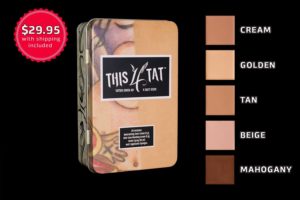