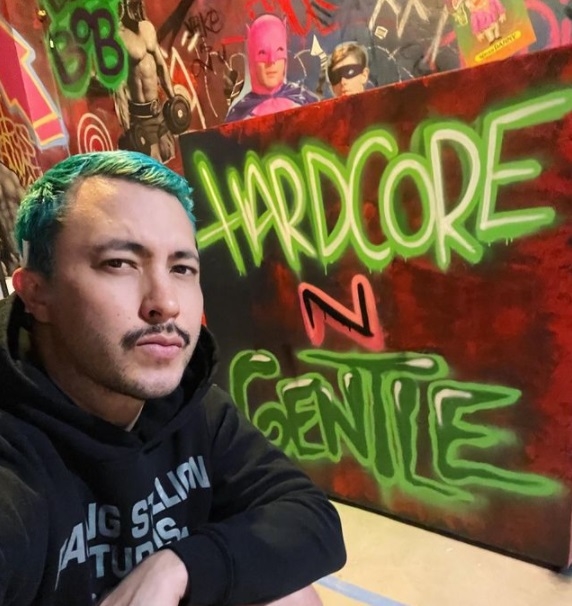 New venue the Q has proven to be one of post-lockdown NYC nightlife’s true success stories, thanks in large part to entertainment entrepreneur Frankie Sharp. As the Q’s programming schedule continues to expand and flourish, you’d think that would be enough to keep Frankie busy…but in the Sharp Cinematic Universe, there are always new places and new parties!

Thotyssey: Hello again, sir! I hope this finds you in your five daily minutes that you’re not busy making magic at the Q. How are you adjusting to running that successful but demanding enterprise?

Frankie Sharp: I’m adjusting pretty crazily, but swiftly. There are so many challenges I didn’t foresee. Like yesterday, the city wiring beneath us caught fire and we lost all of our power… and it was 30 minutes before our sold out comedy show on the third floor. This is the most intense time of my life; it feels like having a child made of porcelain. I guess this is what dreams are made of?

We can go on and on about the Q–there’s so much happening there and so much coming up. But right now we must address… Hush! No, that’s not a command. It’s your new venture! I mean, as busy as the Q has kept you, nobody really thought that would be the only place we’d see you. Tell us about where, when and how this upcoming venue became an idea that will soon be reality.

Isn’t it amazing!? I just really love my business partner Bob Fluet (of Boxers, etc.) and we’ve created such a great business bond and shorthand. And I’m learning so much from him–how to manage people and personalities gracefully and confidently. He’s such a talent.

But yes, he asked me to come on to assist with programming, and as a minority partner. I’m elated. But like you said, this is just the beginning; I’m already working on two other spaces as we speak. I can’t offer too much info on them, but one of them isn’t what you would expect from me, and I can’t wait to share it with everyone.

Is it overwhelming to think that the decisions you make about a new space right in the beginning can affect its atmosphere and programming forever on?

It’s a very conscious part of my process, actually. It’s a part of the spell: speak it, and it will BE it. But then, magic always changes and evolves to where it’s supposed to be, and it’s not “supposed” to be anywhere. It’s a constant, moving, growing, live being/entity. OMG, I sound insane! But I very much believe in believing.

Witchy wisdom! Now, speaking of your earlier-hinted, unmentionable projects, a little birdy told me that something new in the Lower East Side might have a “Sharp” edge to it!

Ha! Well, yes…that’s the space that is the unexpected venture. It is downtown, yes. Ugh, I wish I could say more. All in due time.

Beyond nightlife, there has long been talk about a pending TV project you’re a part of.

We start filming [Saturday]! Once I get to fully announce the details, I’ll give you the exclusive on where it’s landing, etc. But it’s about me and some of the staff of the Q and some of my nutjob friends. It’s all about the theatrical drama at the Q itself and the cuckoo drama behind the scenes. To be honest, I’m not excited about being on TV or being quasi-famous or whatever–but I love money and free clothes.

What are some other things, in or out of the Q, that we can look forward to and that we can talk about?

Vincent Cooper–my right hand at the Q and overall manager extraordinaire–and I are putting together a new show at the Q called “Pink Triangle” that’s going to be a vaudeville spectacle with queens and kings, Broadway stars, belters, voguers, and everything in between, so that’s really exciting. We’re also going to start a brand new Showtunes Tea Dance in the fall on Sundays, so imagine the Pavillion Showtunes event, but a sloppy dance party and a bunch of sluts.

Then, the amazing “Soft Serve” party by Dahlia Sin and Lucas Skywalker is moving over to us as well. We also have literally seven new regular drag shows happening throughout the week at the Q. Not to mention I really want to do that weekly boozy midnight movie screening event. Ugh, I need to clone me.

Every household needs at least one Frankie clone! Well, there’s a lot going and a lot to look forward to, as usual. So I’ll let you get back to it. But first, the final question: As a DJ, what tracks, albums or artists have you most enjoyed stunning the children with on the dance floor this past summer?