An Interview With Cast Members Humberly González and Devyn Nekoda 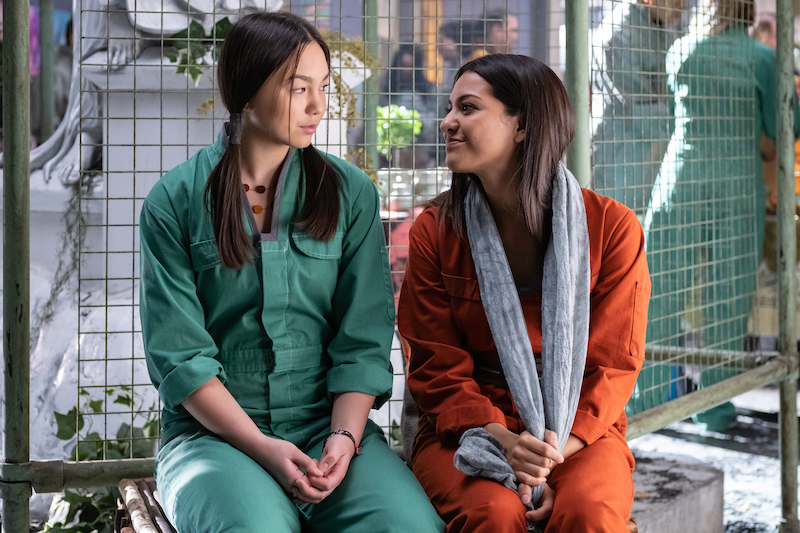 The highly anticipated futuristic sci-fI/hip-hop series “Utopia Falls” is set to launch on Hulu on February 14, 2020. It’s a culturally diverse, socially and politically minded journey that unravels hundreds of years in the future in the last living colony known to be on Earth after a catastrophic event occurred called The Great Flash, which destroyed the world’s digital technology as candidates prepare for and participate in The Exemplar competition. The theme of the series is reclaiming knowledge of the past so you can become leaders in the future, and music is a catalyst for change.

The series, set in “New Babyl,” follows Aliyah, an adventurous teen who through her pursuit of winning The Exemplar competition learned hip-hop, an ancient, unknown form of musical culture. Her thrilling adventure of self-discovery that will change the world she knows forever begins there. The series is reminiscent of the “Hunger Games” meets “Empire.”

Brooklyn, portrayed by Humberly González, and Sage, played by Devyn Nekoda, find themselves romantically involved as they also compete in the competition. I exchanged questions and answers with both talents regarding their LGBTQ relationship in the midst of a sci-fi series.

Was it challenging developing a romantic relationship with Sage?
Not at all! As an actor, Devyn and I connected from the beginning. We were able to approach the work with maturity and care. We had open communication and always kept each other in mind. For me, that’s the perfect recipe for a great relationship. Naturally, that translated to camera very easily. And although we go through so many motions in our on-screen love, as soon as they yelled “cut!” we would hug and laugh and cry (maybe dance) and be so proud of each other for putting our hearts into Brooklyn and Sage. 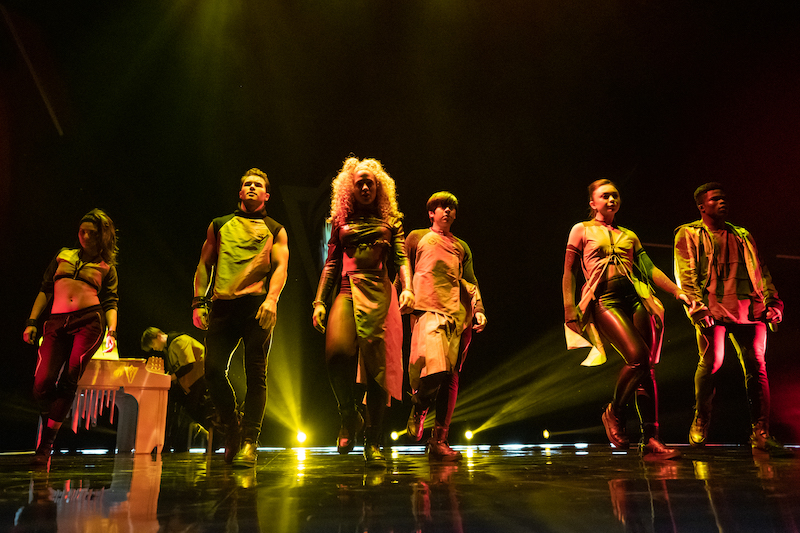 Do you feel the romance between Brooklyn and Sage added to the futuristic series?
I want to believe that there will come a time in our world where homophobia will cease to exist. I love the fact that Brooklyn and Sage can have a relationship, no questions asked. They are drawn to each other because of who they are as people, and that’s the most important thing. Maybe it’s a futuristic way of thinking, and if that’s the case, I love the future.

How close are you in real life to the character of Brooklyn?
There are similarities, but also MAJOR differences. Brooklyn and I are the same in the way we go to bat for our friends. Loyalty is a priority. Brooklyn is confident and sassy, and yeah, I am too, haha! However, she’s got some walls up and a chip on her shoulder that gives her a lot of attitude and cockiness. I don’t relate to that as much. I’m a much more open human who isn’t scared of vulnerability. Beautifully enough, there’s a point in the storyline where both me and Brooklyn melded together, and I learned from her just like she learned from me. 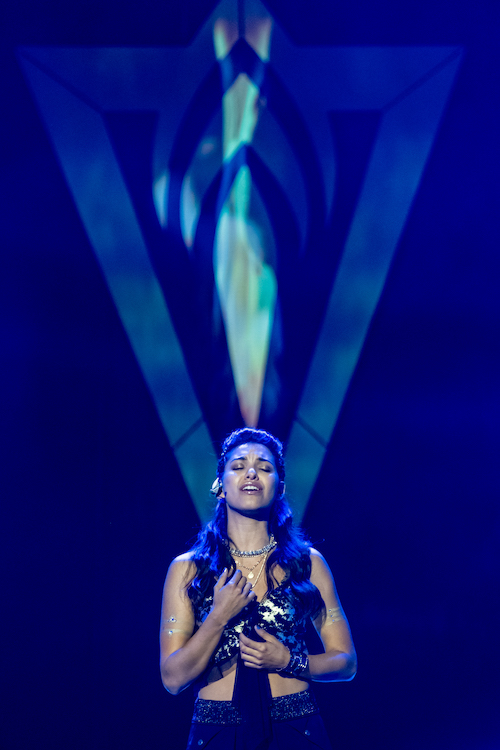 What attributes did you like best about your character?
She is a firecracker! Not scared to have her voice heard, and always has a witty remark to share with everyone, whether they wanted to hear it or not. I admire her growth through the series. Just when you think you got her all figured out, boom, changed.

From your point of view, how do you feel hip-hop, lesbian romance and a futuristic society all fit together?
I’m going to be honest here, at first glance it’s really hard to make a connection between these ideas altogether. The three are relevant in the “Utopia Falls” world, and also relevant in life today. When it comes to hip-hop, it’s the vehicle in which the characters find their voice and are able to stand up for each other. The romance between Brooklyn and Sage is so special, and I would say Brooklyn is a fluid lover—that’s her label more than anything. She loves people, and she goes for who and what she wants. In this case, that’s Sage. It all takes place in a futuristic society in which the history of the past is non-existent, therefore irrelevant to the characters who live in New Babyl. In this world, all these three topics exist, and it is simply possible and exciting.

I feel like the series is similar to “Hunger Games” meets “The Handmaid’s Tale” meets “So You Think You Can Dance.” What is your take on that?
I always explained the show as “Hunger Games” meets “America’s Got Talent,” so this isn’t too far off. I love all the different elements and ideas that are implemented in the show. I must admit, all my favorite things! 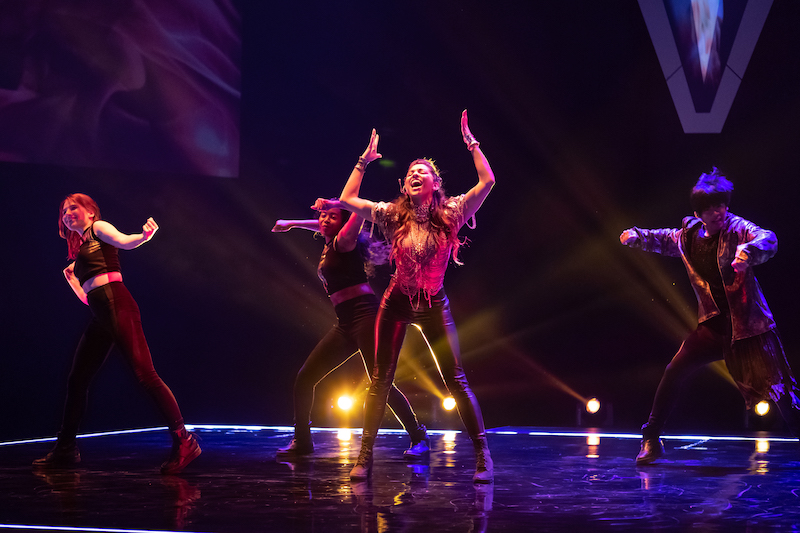 As a dancer, you were probably prepared for your character, but as a woman in a futuristic society, how did you prepare for your role?
When I first looked at the synopsis of “Utopia Falls,” one thing really stood out to me, and that was the fact that in this dystopian future there is no preconceived notion. No racism, classism or sexism, etc. Everyone is on the same level playing field, so to prepare for a woman in this futuristic society, I had to change my mentality and think of what our world would realistically look like if there was no discrimination. It was a real eye-opening experience for me, and it helped me bring my character Sage to life.

How close is Devyn’s personality to Sage’s?
I find there to be quite a few similarities between me and Sage. I quickly realized how close we were to each other on the first day of shooting. Some of the thoughts inside my head were molded into Sage’s thoughts. We are both very gentle towards the ones we love but are extremely fierce and protective towards anyone who turns against me or my friends and family. Sage and I are very serious about what we do and will stop at nothing to get it. Sage also takes her dancing very seriously, and I am extremely passionate about dance. I remember shooting a scene and thinking to myself that if I was in that situation, I would have reacted the exact same way. I feel a lot for Sage and what she goes through, and as a result was able to connect with her very easily. 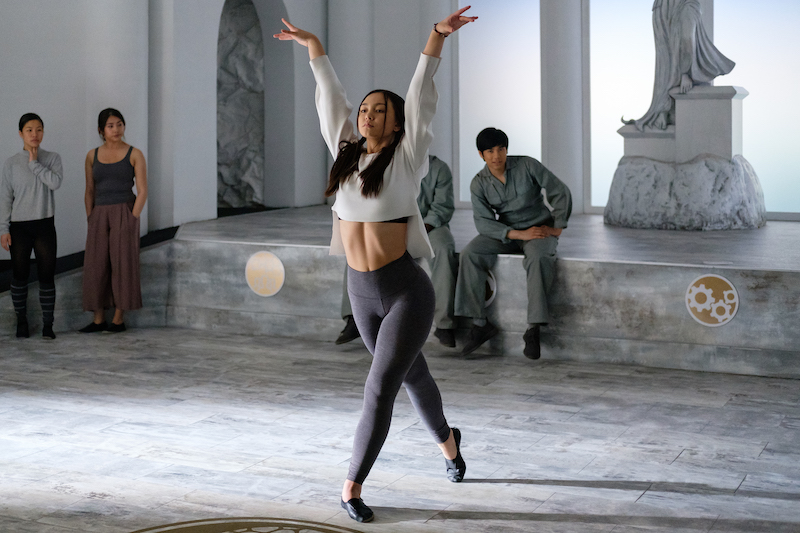 It’s very new and different to have an LGBT romance within a sci-fI setting. What is your own viewpoint on that?
I think it’s amazing that they’re exploring an LGBT romance in this setting. The relationship between Sage and Brooklyn is a really beautiful and raw thing, and I can’t wait for everyone to see it.

Describe the essence of your character.
Sage is a very kind and thoughtful person; she is an introvert, and sometimes has a hard time expressing how she feels. One thing that I really love about Sage though is the fact that all of her doubts go away when she’s dancing. That’s when she’s truly her happiest and most like herself. Throughout the season, Sage’s essence changes a lot after she goes through some challenging times, but she comes out of it stronger than before, and I really admired her for that.

I feel like that set must have been a blast to work on. Can you recall one funny instance or experience?
I had the best time working with the cast and crew. They’re like family to me now. Every single day with them was so much fun, and they made the 13-hour days seem to go by in a minute. The funniest experience I can remember is the time when we were filming outside in the forest for a night shoot. It had to be after midnight, and Humberly, Phillip, Mickeey and I decided to watch a horror movie in one of our trailers. We were already pretty spooked because of the setting, but then all of a sudden, we were hearing weird noises and what sounded like rocks being thrown at our window. I am the biggest scaredy cat when it comes to this stuff, so you can imagine how much I was freaking out. Turns out, Mickeey told the wardrobe crew what we were watching and that he wanted to prank us. So, whenever they had time, they were doing these little pranks that I thought were an actual ghost. 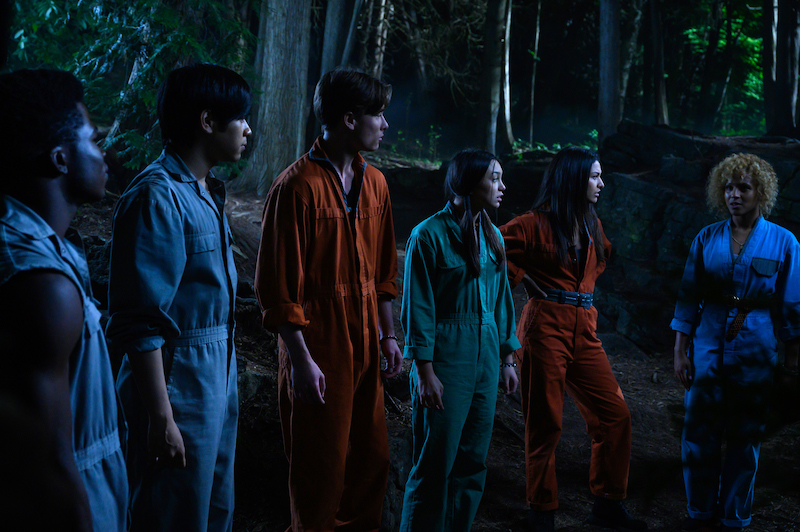