Halston, the Netflix miniseries about the rise and fall of the iconic couture designer, was as sexually-forward as it was fashion-forward.  It had everything fans could expect from a Ryan Murphy production: rock music, drugs and loads of runway looks, but it was the eye-popping nakedness that truly captivated fans in 2021; especially the scene where Ewan McGregor and 6’4 tall Sullivan Jones engage in very realistic intimacy.

“Hollywood continues to push the boundaries when it comes to nudity and sex,” says Phil Henricks of Mr. Man, the world’s leading online library of every male nude scene in the history of film and television.   “Many of the scenes we saw play out on screen in 2021 simply would not have happened in previous years.” 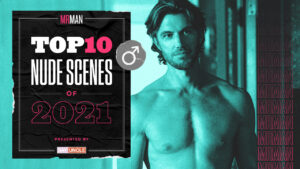 Mr. Man’s Top 10 Nude Scenes of 2021 were chosen by Mr. Man’s editorial, production and marketing teams. Other notable winners are Adam Driver in Annette and Ben Hardy in The Voyeurs. For a complete list of winners and to view all ten scenes in their entirety, visit Mr. Man.