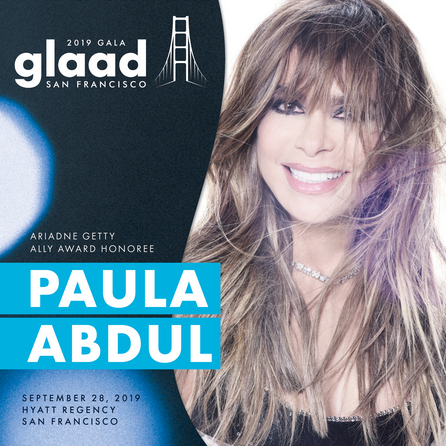 Worldwide sensation Paula Abdul will be joining us at the 2019 GLAAD Gala  San Francisco to be honored with the Ariadne Getty Ally Award!

The Ariadne Getty Ally Award is presented to a LGBTQ ally who uses their voice and public platform to accelerate and affect acceptance for the LGBTQ community. This individual is someone who fearlessly works to end the injustices facing marginalized communities. From her feature in a 1992 educational film titled “Time Out: The Truth About AIDS & HIV” and hosting the 1997 AIDS Project Los Angeles’ AIDS Dance-A-Thon to speaking out in support of transgender youth and those affected by HIV/AIDS on her social platforms and so much more, Paula dedicated herself to allyship throughout her career. For more information on Paula Abdul’s activism and advocacy work, please see below.

Paula Abdul is our third and final honoree, capping off the evening including Davidson/Valentini honoree Dan Levy and Ric Wieland honoree Ali Rosenthal. With our host Peppermint and many more special guests still to be announced, you will not want to miss this event!

For more information about how to get involved and support the event, visit glaad.org/sfgala or join us at a cocktail reception to learn more on September 9.

Abdul is very active in her community as a spokesperson and advocate for national charity organizations, including the American Humane Association and AIDS Project Los Angeles. In 2014, the Avon Foundation for Women tapped Abdul to become their Avon Global Ambassador for their international #CheckYourself digital campaign in support of Breast Cancer Awareness month. This year, Abdul partnered with Turnaround Arts, a signature program of the President’s Committee on the Arts and Humanities, to adopt a school in Brooklyn, New York and help foster arts education in underprivileged schools across the nation.

Throughout her career, Abdul has been a dedicated ally to the LGBTQ community by bringing awareness to issues affecting LGBTQ people. In 1992, Abdul was featured in an education film titled “Time Out: The Truth About AIDS & HIV,” which helped to bring awareness to HIV/AIDS and address common misconceptions. In 1997, Paula Abdul hosted the AIDS Project Los Angeles’ AIDS Dance-A-Thon, which helped to raise money for the Project’s work to provide services to those living with HIV/AIDS in the Los Angeles region. Throughout her time on American Idol, Abdul also helped to mentor several LGBTQ artists, including Adam Lambert and Adore Delano.

Abdul has also used her social media platform to advocate for LGBTQ acceptance. She spoke out in support of transgender youth on International Transgender Day of Visibility via Twitter and has participated in GLAAD’s Spirit Day to stand up against anti-LGBTQ bullying and send a message of solidarity and acceptance to LGBTQ youth. Abdul has also used her social media platforms to recognize World AIDS Day, encouraging people to learn the facts about HIV/AIDS in order to end stigma. In an interview in with Get Out Magazine in 2018, Abdul also cited the influence of her LGBTQ fans, stating: “I wouldn’t have my career if it wasn’t for my gay fans. I have always been very close to the community…They have been there with me through thick and thin and stayed with me, always loyal. I love the (gay) community.” This past June, Abdul also headlined the 2019 LA Pride Festival Opening Ceremony.

Funds raised from the GLAAD Gala SF support GLAAD’s crucial programs working to accelerate acceptance for LGBTQ people. Now, more than ever, your support is critical to our work and the road ahead.