Thotyssey: Hey, Michael. I see you were just in Miami, performing for Pride onstage with Paulina Rubio and Erik García.

Michael Miguel: Yes I was. It was amazing. I’m beyond grateful to Paulina and Erik for the opportunity to sing and give back to my community. It’s a moment I know I will treasure for the rest of my life. Just to share the same stage as an icon as huge as [Paulina], who has done so much for the LGBTQ community and has inspired me to do what I love…It’s a dream come true.

And while you were in Miami, you attended Billboard’s Latin Week as well.

Yes, I’m extremely grateful. I got the opportunity to meet some of my idols and peers and connect with some amazing artists and people in the industry.

You’re bartending at Atlas Social Club these days. How’s it been there since the re-opening?

It’s been pretty amazing–not only having an amazing boss, but a way to connect to my community more.

Where are you from, originally?

I’m Colombian and Puerto Rican–born in Flushing, New York, and raised in New Jersey. I spent five years in Miami and now I’ve been back in NYC for a little over four years.

Was music always a part of your life?

I actually was raised as a Jehovah’s Witness, so it was frowned upon to pursue anything related to music. But ever since I was a baby, I loved music. At the age of two, I sang with a mariachi band in a restaurant called Tequila Sunrise, so since I was a child, I knew what I wanted to be. 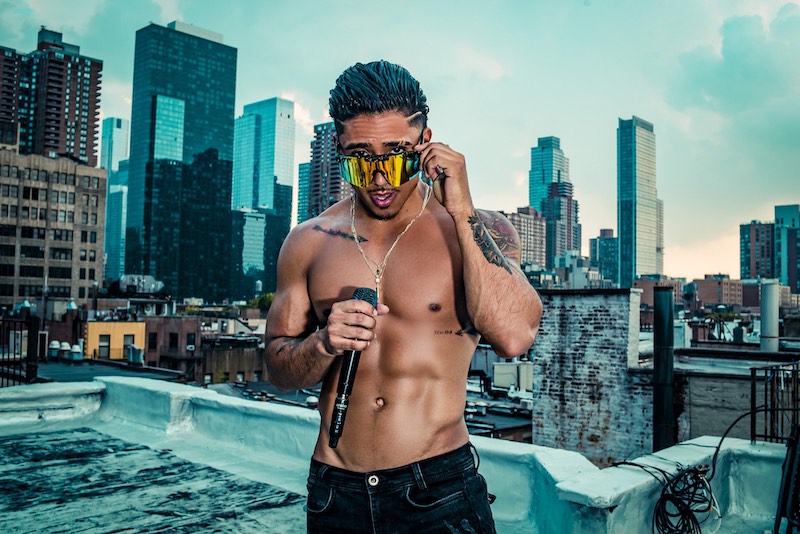 We love ”Chuku,” your latest single that’s been making the rounds at the bars and on playlists. Do I even have to ask what a ”Chuku” is, lol?

The title of the song is a made-up term my friend Andre invented for ”fucking.” That way, if there was a family or children around, he would just say, I’m going to go ”chuku chuku,” and I loved it so much, I decided to write a song about it, haha!

Gag! Speaking of gagging, it’s always a pleasure to watch local video vixen Boomer Banks shove a hot dog down a throat. What was it like working with him in the video shoot?

He’s actually a very close friend of mine. I’ve always loved how open and unapologetic he is about his sexuality. When the song got a lot of traction, people were dying for a music video, and the first person I thought of was Boomer. So I asked him, and he loved the song and the idea behind the music video and signed on to the project. And trust, I loved every second of him shoving his hot dog down my throat, haha! That was also improvised…I was not expecting it!

Well you, um, “took” it very well, lol! I hear you have new music in the works. You’ll be getting your own Billboard Music Awards soon enough!

Thank you! For sure, I have a feeling it’s in the cards for me. And yes, I recently started working with a team and a big producer from the industry. We’re currently working on my first full album, which hopefully will be ready by next Miami Pride–where I am scheduled to perform a full set next year.