Michael Musto on Cocktails and Classics and ‘Mommie Dearest’

Michael Musto, the Meryl Streep of New York City’s gay nightlife, is one of the most celebrated columnists, bloggers and writers in Manhattan today. There is no need to remind one that he wrote for the “Village Voice” for 29-plus years and currently writes a column in “Out” magazine, or that he wins every New York award known to man. However, he is now a guest host on the panel of Logo’s new hit series “Cocktails and Classics,” along with Michael Urie from “Ugly Betty.”

At a beautifully arranged, intimate gala and simulation of the show at the lovely Eventi hotel on 6th Ave., complete with cocktails and a screening of “Mommie Dearest,” Get Out! had Michael speak out on the awesome phenomenon.

Michael, in your own words, please tell the world all about “Cocktails and Classics.”
“Cocktails and Classics” is a show on Logo and is in its second season. It’s basically a movie party hosted by Michael Urie, and we all go to a set done up like Michael Urie’s apartment where we all say what we’re looking forward to in the movie we are going to see, which is always some amazing, fun, classic film. In between the movie we tell back stories, we play party games and we act out lines from the movie.

Tonight at the Eventi hotel we had a simulation of the show where we are showing “Mommie Dearest.” We had a cocktail reception, which was delightful, and we had a discussion with people from the audience. Members of the press were asking questions about “Mommie Dearest,” and [we had] Rutanya Alda, who of course played Carol Ann and wrote the book about the making of “Mommie Dearest,” so she knows everything about Faye Dunaway and how she operated. Next Sunday is when we’re going to have the “Mommie Dearest” show on “Cocktails and Classics” at 8:30 p.m.

How did you become a part of this show, “Cocktails and Classics”?
I got an email from Logo asking me if I would be a guest panelist. I’m on four of the shows this season; they shot eight shows. I was thrilled, because I have a real-life movie club. Lynn Yaeger, Mickey Boardman and other people come to my house on a regular basis, and we watch movies and carry on. So this is so true to me. Movies have always been a catharsis for me, an escape and a salutation, and I adore everything about movies, from the casting to the costumes, the accessories, the scenery and the dialogue. When I went to the set and started shooting the shows, Michael Urie was so delightful, and everybody we worked with was so much fun. It was such a well-oiled machine where they had all these different segments ready that we would participate in. It was just pure joy! It’s really gay heaven for me.

Do you have a favorite movie?
My two favorite movies are “Valley of the Dolls,” which we did on the first season, and “Mommie Dearest” for this season. We got to do all my favorites, and naturally I sent them ideas, and they used a lot of my ideas, so it’s really cool.

Did you have a favorite part of “Mommie Dearest”? What line is most memorable?
Every line in “Mommie Dearest” is memorable. The dialogue is so over the top that you can quote any line and you’ll be the life of the party. They really wrote a great script. It works as camp; it’s funny, but it also is deadly serious because of the subject matter.

Do you believe everything in that movie?
I believe the essence of the movie. I don’t believe every detail. In fact, when Christina Crawford saw the movie, she didn’t like it. She thought it was overdone, so obviously some of it is not true. Hollywood also changes every story they make into a movie, but I think the essence of Joan Crawford being abusive is true, and the fact that people covered it up is true.

What do you think of Faye Dunaway wanting Rutanya Alda to help her write her own book on the subject?
It is typical of Faye Dunaway that she tried to get Rutanya to help her remember everything.  She said, “Just buy my book—that will help you.” [Just then, applause and laughter came from the movie screening.] Oh, they are applauding. Can you believe this? It’s a big hit.

Do you remember the first time you saw the movie?
I do. I saw it as a screening, a press screening, in 1981. I called my friend afterwards and said, “I’ve just seen the most amazing movie. You’re not going to believe this.” I was riveted. 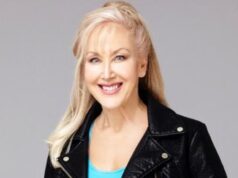