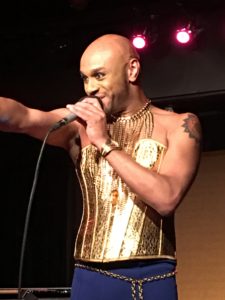 The artist knows how to work it! That’s the first thing that comes to mind when casting eyes upon the salaciously relevant Aaron Paul, former lead singer of the Simon Cowell, hand crafted, boyband, “Worlds Apart”, the UK’s answer to *NSYNC.

Outrageously garbed in over the top costume, Aaron dazzled that stage, singing his new hit single, “Ain’t Nobody”, featuring rapper  Durrty Hanna, at Bowery Electric the other night, headlining along with comedian Ike Avelli, solo artist Brian Falduto, and EDM-Rocker sensation, Toggo Ultrarock. This performance was followed by a night at The Duplex Cabaret Theatre, where the dance music  marvel surprised his fans with several dance ballads, including an amazing song I’d never heard before, “Tattoo”. Then it got personal!

Celebrating his birthday at the Duplex, Aaron evicted his mom from her seat, pulled her onto the stage, and dedicated his next song to her during a heartwarming performance in front of a tear stained, emotional audience. Hearts stopped, melodrama reached its heights, and mom Jill tried to hold it together. 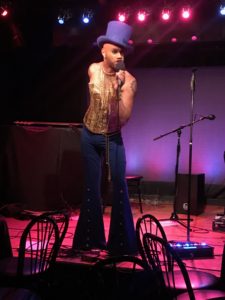 Aside from his songs, Aaron gets the upmost credit and respect for his style, his fashion sense, and his scandalous, extravagance in front of a crowd. Hosting hundreds of Red Carpet events in New York City, and strutting his stuff everywhere, Aaron is a hot and talented commodity in the New York nightlife scene. He’s got it going! He kills it on stage! Besides all that, he’s a nice person, always making time to meet his fans and pose for a picture or two with anyone who asks.

Watch for Aaron in upcoming shows this fall and during the holiday season….