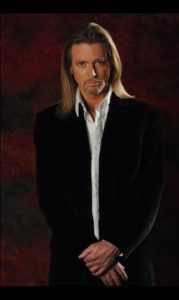 One of the most prophetic and musically advanced artists in the world today Christopher Sluka quietly and mysteriously defies imagination. He conjures up political demons, while celebrating  their demise, and manufactures a darkness while illuminating the world with a euphonious sonic fantasy, meticulously encapsulated within his new release, “Colorful Radiation”.

An abstract revolutionary, Sluka has the aptitude and attitude  to create mellifluous masterful orchestrations larger than life to accompany his powerful lyrical messages in this 10 track masterpiece. Often and easily compared to Bowie, Coldplay, Radiohead and The Killers,  Sluka has recorded 11 studio albums., as well as a Blu ray video album of last year’s compelling accomplishment, “Introversions”.

“Colorful Radiation” was recorded and mixed by Sluka who also played all instruments including: guitar, piano, drums, bass, violin, trumpet, trombone, French horn, ukulele and synthesizer. His powerfully emotional vocals has drawn inspired, global audiences to his memorable live performances of which sold out venues are commonplace.

Aside from his overwhelming and captivating musical endowment, Sluka is also an Intercontinental  renowned visual artist whose surrealistic oil paintings have been displayed in galleries all over the world. The San Diego based artist is also a long distance runner and an accomplished jet-type rated aircraft pilot.

I was honored to be able to have captured some time with Christopher Sluka in between his dancing with the sharks while shooting all 10 tracks in 3D as a combo 3D, 4K, and Blu-ray package which will be sold on Amazon late this summer. In addition to being greatly impressed by his magical musicality, I was impacted by his sensitive and compassionate vulnerability, yet he displayed animated, titanic convictions. He has a special passion for the world to hear his music…. 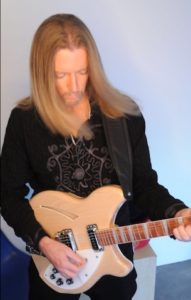 So Chris, let’s talk about the sharks.

I was at Torrey Pines in San Diego not realizing that I had to get in the water, and there are things out there that eat people, as I tried not to drown or get eaten by a shark. I’m literally a fish out of water in this place in San Diego. I’m such a dark, dreary person, believe it or not and I’m living in sunny San Diego.

Are you from San Diego?

No, I’m an army brat. You sound like you’re from New York. I spent a lot of time in New York. I lived in Fort Totten near Bayside Queens for years with my parents. Then they moved on and I went to NYU, and then eventually Queens College, while my band was getting popular. Then after that I relocated to Japan for a couple of years. After that I wandered back here to the states, and I chose San Diego because I had it with New York’s summers and winters. I love New York, in the Spring and Fall.

I’m excited to hear about your new release.

So after last year’s album, which you wrote wonderful things about, thank you so much…

I really loved your music, and still do.

You had asked me in the interview what was next, I really had no idea. The plan was, I was going to do another tour in Europe, but then in November, we… In this country had this tumultuous thing happen called Donald Trump and his supporters that just threw me for a loop, I just could not believe it. I’m not really a political person, but I was just shocked at what was going on. Musically I don’t really care about the Donald…he’s just a reality star and all of that. What’s shocking to me was the people that were drawn to this message of anarchy, “Let’s shake things up”. I’m like “guys, THIS ISN’T JUST A SHOW”. That had a big influence. Then all of a sudden within a few weeks the whole album came to me, from start to finish, the melodies, the lyrics, all the instruments and even the visuals….I never had that happen to me before. That was new to me. Its like I didn’t have to work on it. It’s like having a song that you hear on the radio, over and over again, and you can’t get rid of it. It was something like that only these were new songs. So I took a couple of instruments that I hadn’t played in a while, I rehearsed the parts, I just laid it out. I don’t know if I mentioned it before, my house is a large recording studio, so I can just work on these things 24/7, whenever I want to. In this case, it was a mad frenzy! It was just crazy, crazy, the screaming and laughing and crying, and everything else. Then looking back on it, it was very cathartic.

I think that your music is so awesome, I want to know what is in your head that inspires it to appear the way it does.

Well, I suppose if I told certain people, they’d want to lock me up. It’s crazy ideas that pop into your head. The only way to make the voices stop is to perform them and record them, and then just move on. I have never sought fame, that’s for certain because I know a lot of people that are famous and all of them have these horrible stories that fame brings them. I don’t want anything to do with it but, I do realize you have to have a certain amount of publicity, no matter who you are, so people know who the hell you are, to buy your stuff. There are thousands who put out records these days. At any rate, getting back to that record, I was really, really driven and it was never about me. It’s about things that I think other people can relate to. Not just Trump, but other things that are going on in our society. This sense of angst like how we deal with terrorism and North Korea. We’ve had all this going around forever, ever since I’ve been born. I’m sure you remember things like the Cold War and all that stuff.

I can. I remember being really young and being so scared that we were going to be obliterated.

Yeah, like at any moment you’re telling me that at any second New York City can just be incinerated by nuclear weapons, and some guy like Reagan can just push the button…”Are you kidding me”!! It’s nuts, it’s nuts!! The people that I know are like, ” Chris, calm down, calm down, let it go”. Yeah, I get it, but it’s still there.

I heard from a comedian that the only reason he was elected was because we’re due for an assassination so I’m keeping my fingers crossed.

Watch what you say Eileen. You’ll get a knock at the door.

But, I love your new release.

Some of it’s fun. I think the first track is fun. I’m just poking fun of how people just want to be “Number One”. The third song on the album is definitely making fun of Trump, (“Rise”). I might get into a little trouble though. There’s a song on there called, “Singing Slights”, and I’m taking the role of him, or people like him, sadistic people that want to be adored, narcissists. I’m afraid the people are going to think that I think that, but who knows.

Look at it this way, you’re either going to arrested, killed or become famous.

I don’t want any of those! Feed me to the shark! 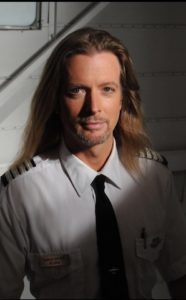