It’s ok to make mistakes.  It’s ok to fall down.  Get Up.  Look sickening, and make them EAT IT.  That’s what Latrice Royale intends to do when she performs Drag Brunch at Highline Ballroom this Sunday, August 6. 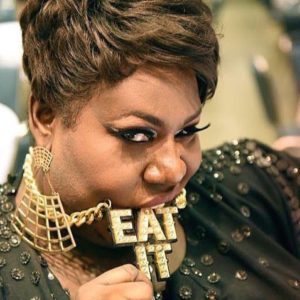 The Royale Queen of Drag began performing in the nineties.  Five years ago, on a whim, she tried out for Season 4 of RuPaul’s Drag Race.  She was chosen to compete on the show and rose to the top four, alongside Sharon Needles, Chad Michaels, and Phi Phi O’Hara.  When Royale was cut from the competition, Entertainment Weekly called the elimination “shocking.” Latrice Royale was later voted “Miss Congeniality” by show fans.

It was a long way to her throne for Latrice.  She grew up on the tough streets of Compton in a violently homophobic environment, yet Latrice says the experience shaped her into the extravagant queen she is today.  She learned to pay attention, be aware and to not be stupid.  The streets also gave Royale the fight and conviction to get the hell out of town and make something of herself.

Before she would become a star on Drag Race, however, she spent time in the slammer.   “They called me ‘Big Chocolate’ in prison,” she remembers.  “My size helped.  The other prisoners didn’t mess with me.  They knew who I was on the outside and gagged at my splits.”

As fans of RuPaul’s Drag Race will attest, Latrice Royale’s epic splits are always a showstopper.

“The worst part of prison life was losing my mother,” she continues.  “It was the most alone I ever felt.”

But those years are behind Latrice now and these days, her calendar is full with TV appearances (since RuPaul’s Drag Race, Latrice has appeared on TV’s Fashion Rocks alongside Jennifer Hudson, RuPaul’s Drag Race All Stars and RuPaul’s Drag U, and in the documentary film, Gays in Prison) and live performances.  She performs Drag Brunch at Highline Ballroom this weekend. 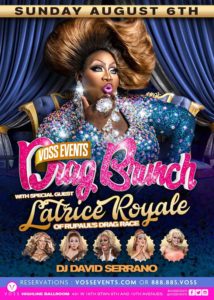 Latrice Royale has also released a jazz album, “Here’s To Life.”   In it, she isn’t trying to match the greatness of her jazz idols.  She often jokes how her deep baritone voice sounds like Barry White in drag. “My goal is to be authentic to myself, my voice, and my experience,” she explains.

One of her favorite singles from the album is “I Am What I Am” from the musical La Cage aux Folles. “I’ve lived enough to justify being able to sing it and mean it, you know?  It’s fun and meaningful at the same time.”