The man that Keith Urban says, “makes Ryan Seacrest look like a slacker,” Cody Alan is a host and executive producer of CMT radio, where listeners hear him daily on more than 200 radio stations. Hosting CMT’s flagship music show, “Hot Twenty,” he reaches 90 million homes as he interviews some of the biggest country celebrities on the planet, including Dolly Parton, Taylor Swift, Blake Shelton and so many more.

Cody publicly came out in 2017 and since then, his story has helped many others. On November 9th, he will release his debut memoir, Hear’s The Thing that details his intimate story and the lessons he’s learned along the way.

He has found great success in his profession through listening but ultimately, he found that the person he had to listen to most was himself. As you dive into the book, you become immersed with Cody’s raw honesty and ability to relate to everyone through such a personal story.

Congratulations on your new book, Cody.

It’s been a labor of love the past few years, just getting it right and honing in on just how I wanted to present the chapters, my message, and my story…in full. All of it. I’m really proud of it, honestly.

In fact, it is the whole story, from beginning to end. (Well, actually, there’s no end yet. It’s to be continued.) It goes back to how I grew up in the South, loving country music from an early age; how I got into broadcasting; and then figuring out from the time I can remember as a kid and knowing I was gay, how to deal with it. Then finally coming to peace with myself, listening to my own heart and coming out in 2017.

What sparked the inspiration for coming out when you did?

It was many years of knowing who I was and not doing anything about it. I was previously married to a woman. I have kids with her, a family. It was realizing overtime that I needed to be real and get honest. I realized that so much of my life, I was sort of faking for so long. I needed to be the man that I wanted to be, which was a man of honesty and integrity. So, after having lots of conversations with family and friends and country music stars over the years, I finally came to the point where I could let the world know this about me. So, it was a long time in the making.

Do you think that by coming out it has affected anything in your career?

Only positively. When I came out, what I feared most was rejection. You don’t know how people are going to react, especially when you are in the public eye. I knew my family was with me–that was important. I knew that so many friends in the industry were with me. But you just don’t know when you make that statement and put it out there how people you don’t know are going to react. Yes, of course, there were haters–there always are–but the good news is that for the most part, there was a wonderful reaction and a lot of people on my side who helped support me in that moment. That’s part of what the book is about. It’s about obviously listening to yourself, who you are, but also through the struggle of whatever it is you’re facing…for some people like me, it was coming out, looking to those around you…for me, it was friends and family and artists I had conversations with, who I was able to be true to and speak to about my authenticity, and in turn those conversations helped me through that struggle. It led to the moment where I felt comfortable enough to say it in public.

A lot of people who I didn’t know were so supportive and so loving in the country music world like Carrie Underwood, Toby Keith, Dierks Bentley and Keith Urban. So many of these people said positive things that day. It was very humbling to know that when you take that leap, there’s a net there. That’s the net of support that comes from the people who love you the most. I wanted to write the book to share all of that. To share with people how I led up to it and that there is joy and happiness afterwards. Truly being you is the best way to go.

I would say there is a movement of inclusivity in Nashville that hasn’t existed before. I’ve seen tremendous progress within the last few years. A new openness that certainly didn’t exist when I came out in 2017. T.J. Osborne of Brothers Osborne just recently came out, and he is a prominent country star. To see that moment happen in such a big, beautiful, bold way for him was amazing. The acceptance and love that came afterwards is evidence of the progress we are making here in Nashville and in country music.

I want to talk about your career for a minute because I think it’s fascinating and because I’m very jealous that you got to interview Dolly Parton!
She’s the best.

How did you become interested in broadcast and radio, and can you explain exactly what you do?

I’m a radio/TV host for CMT, hosting their signature country music program on the weekends. I also do a daily radio program as well. We interview top stars, as well as newcomers to country music. Like you said, I’ve been so humbled and blessed to talk to people like Dolly, which was an outer body experience. I’ve got to tell you, the person that you want her to be, she’s all of that times 100. She knew my name the first time I interviewed her. I don’t deserve to know Dolly Parton.

I was 15 years old when I got my first radio job. I was bold enough to call up my local station and ask them what I could do to be on the radio one day. I asked them if I could work for the summer. “I’ll pour coffee for the DJs, I’ll make copies, I’ll clean bathrooms, whatever you need.” The owner of the station gave me a shot. Eventually, they knew that I was really hungry to be on the air. So as luck would have it, one of the DJs got sick for their shift and they called me to do it. So, I got my first radio shot late at night on a humid Saturday in Columbia, South Carolina, and the rest is history. I climbed from there and eventually got my own show on the weekends. From there, I moved around a lot. I’ve lived in lots of places. That’s the story of a broadcaster. I’m super grateful for it. I didn’t have a lot growing up, so to do what I do now, it’s all a dream come true. 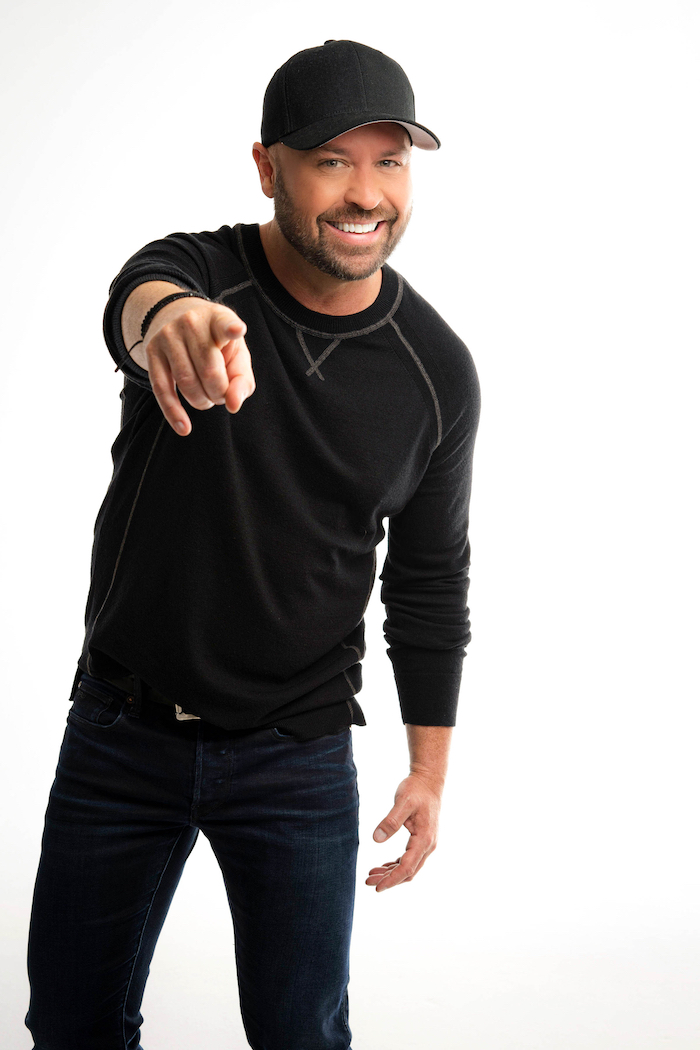 Is there anyone that you would like to interview that you haven’t yet?

Yes, for sure. The person I have not interviewed who I’d like to is, I think, Ellen DeGeneres. I met her in Santa Barbara, California once. She was doing a fundraiser for wildfire relief and I was there doing our TV show with Brad Paisley. I got a chance to go up to her. She had a Modelo beer, so I grabbed a Modelo beer. I went up to her backstage and I told her what she meant to me and how she’s blazed trails. She was very gracious and very kind. Then, I said “Oh, by the way, I’m gay.” And she said, with the biggest laugh, “Oh, me too.” I’d like to have a real interview with her.

Have you had your ultimate stage fantasy?

If you’re asking me if I’ve ever been in drag, Eileen…no.

Well, if you want to be, I can help you…

Before I came out, I had never even been to a gay club. I’d never been to a drag show. I had never experienced any of the awesome gay culture. I had never watched RuPaul‘s Drag Race. I only knew that I liked dudes. But since I came out, I’ve done all of those things. I love to go to our local Nashville club and watch the drag show. Nashville has the best drag queens on the planet. I know you think you have the best in New York….

I’ve been to the clubs in New York and they are amazing. But I must give a shout out for my hometown here. The gay scene here is actually quite vibrant and I love it. Since coming out, all that explosive world of gay culture has become part of my life. I embraced it and I’ve fallen in love with it. It truly is awesome.

What is the ultimate message that you hope people will get from reading your book?

Obviously, you’re going to get a country music story of my life and the music that has been the soundtrack of all my experiences. On the other side of that, I realized that listening is a very powerful thing. It really is also such the story of my life. So, the message of becoming a better listener is something I hope people will get out of it. I think we all struggle with something. For me, it was coming out and for other people, it might be something else. We fear the unknown and we turn to people to help us with our struggles. For me, it was family and friends, coworkers and even artists that I turned to when I was struggling with coming out. Those real-life honest conversations are such a huge part of this book because I realized that when I was struggling, I needed to be heard. I needed people to listen to me. People who did show empathy and didn’t judge me but listened to those conversations gave me honest help. During that time, they were lifesavers. And yet because of those conversations, I was able to be a better person. The more we listen and love each other, the better we will all be.

There was a moment with the great talk show host Larry King. I interviewed him before he passed, and he said something to me that stuck with me. He said, “I never learned anything while I was talking.” I thought that was so true. How noisy and chaotic is our world to the point now that we don’t hear each other? If we can’t hear each other, we can’t learn. We’ve got to open our ears and stop talking long enough to hear others’ and even our own hearts. That’s why I call it “HEAR’S the Thing.” I want people to know that hearing is the thing that will help you and others find true happiness, particularly if you are LGBGQ+.

If you could choose to be gay, would you?