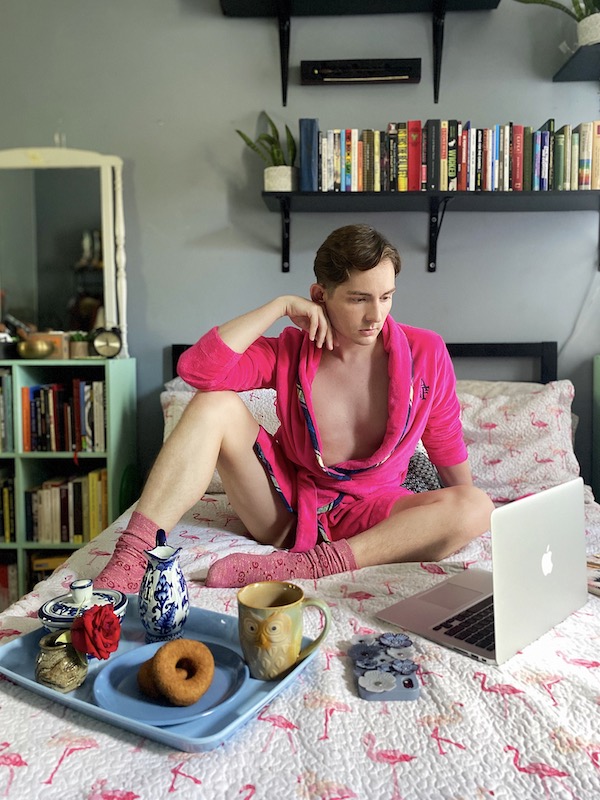 May 1st was my two-year anniversary with my boyfriend.

It seemed impossible that we’d be celebrating in quarantine. The year before, we went to Olive Garden in Times Square. That might sound silly, but it’s where we had our first date.

James had been interested in me for some time, but I was seeing someone else. James and I were already roommates, so when things got romantic, it was easy to put off the first date, instead staying in to watch movies and spend all night in bed together. Finally, he said that we had to have an official first date and picked Olive Garden in Times Square. Coming from the Midwest, I didn’t object.

The date came, and there was a snowstorm. The snow was thick and the wind was brutal. I suggested we postpone yet again, but James would have none of it. After confirming that Olive Garden was open, we braved the storm.

The restaurant was empty. We got a great table with a view of Times Square, and we finally took the time to get to know each other on a deeper level. When we went back for our one-year anniversary, I drunkenly put our wine glasses into my bag as keepsakes.

For our two-year quarantine anniversary, I decided to recreate the date when James asked me to be his boyfriend. He had taken me on a picnic in Central Park. This time, I brought the picnic to our bedroom. I strung white Christmas lights around the room, put a red gingham tablecloth on the bed, and made sandwiches, pasta salad and drinks. When we finished dinner, I unveiled two watches–one for him and one for me, matching except in color. His was a pretty lavender, mine an olive green. (I guess I still had Olive Garden on my mind, lol.)

The evening was nice, but something seemed off. James was quiet and romance was not in the air. I chalked it up to quarantine blues and shrugged it off.

Things didn’t get better for us. We started arguing more and more, I started to feel further and further away from him. About a month after I’d been back to work, I decided to sit down and talk to him about it.

“I feel so far away from you,” I said. “We aren’t on the same wavelength. I get home from work and I feel like you don’t want to be with me. What’s going on?”

The conversation did not go well. James felt attacked. He felt like I was blaming him for the distance between us. He was upset that I hadn’t been present. That wasn’t something I’d considered, but he was right. I’d been depressed, and I’d stopped bringing myself to the table. He ranted about being the only one who shopped for supplies, the only one who cooked dinner, the only one who cleaned. And he wasn’t wrong.

He worked himself up so much that he grabbed his keys and mask to go outside for some fresh air. I didn’t see him for hours. I checked his location on my phone and saw that he had walked from 171st Street to 14th Street before taking the train back uptown.

When he got home, he sat down, calm and melancholy. “I don’t want to do this anymore,” he said.

“I don’t want to fight either,” I said, reaching for his hand. He pulled away from me.

“I don’t want to do any of this anymore,” he clarified, looking away. “I need to take a break.”

I didn’t know what to say.

He slept on the couch that night, and the next day told me he was officially breaking up with me. With nowhere to go, he spent the next week on the couch.

I was in shock that entire week. Maybe this needs to happen, I told myself. Maybe I am a bad boyfriend. Maybe I’ve not been supportive. Maybe this is for the best.

I got through the week in a blur, but by Friday, my emotions caught up with me. No, this does not need to happen, I realized. I can work on the things he told me about: I can bring myself to the table.

I wrote him a letter, then read it out loud to him that evening. I detailed all of the reasons we should stay together. I also explained all the work I would put into the relationship. He’d suggested couples therapy to me before. I told him I was all in, 100%.

We talked for hours that night, back and forth. I stood my ground: “Everything you are saying are things we–and I–can work on. What we have is too special to throw away like this. The world is also a mess right now. This is a decision we will regret. I know we are right for each other. I know I want to spend the rest of my life with you.”

Finally, at 3:00, he said, “What if I just want something different?” I exhaled. “Then there’s nothing I can say or do that will change your mind. But look at all that we’ve built together, and everything we would be throwing away.”

He came to me and held me while we both cried. “Okay,” he said, finally. “I want to stay.”

We kissed for a long time. When we took off our clothes and he entered me, fireworks started going off just outside our bedroom window, as they had been randomly doing every night that week all around the city. The fireworks continued as we made love.

We took a walk the next morning, just like we had every morning before I went back to work.

“You’re sure you want this?” I asked.

“Yes,” he said. But I couldn’t be sure that he was being sincere. (To be continued…)