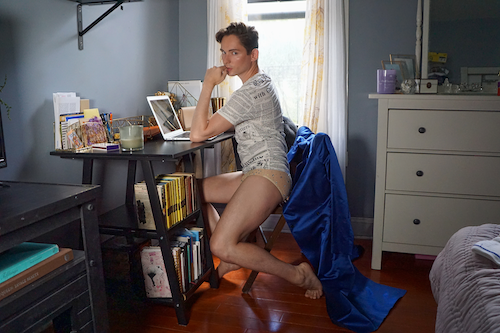 By April, out of work since March 17, I struggled to find ways to pass the time.

I kept getting the same message from everyone: “Oh, you must be writing so much!” Family, roommates, friends, people I barely knew, all wanted to know what I was writing. “You finally have the time to write!” they all said. I can see them now, each and every one of them gathered in my mind, speaking in unison. “That must be wonderful!”

It wasn’t wonderful—and I wasn’t writing anything. One day, I tried to. I woke up early and showered, styled my hair for the first time in a month, put on a cute outfit (Nathan Ayon sheer swim briefs and a Galliano newspaper print T-shirt, since you asked), and sat at my desk to write. I had something in the works, about 10,000 words already on the page, and reread some of it before jumping back in.

I didn’t like any of it. I’d read over it before—just a month ago I thought it was the best thing I’d ever written—but now I hated every word, every metaphor, every turn of phrase. I decided to pick another work-in-progress to write, but I hated rereading that piece as well.

I spiraled from there.
I’ve never hated my writing before. I’m not proud of every single thing I’ve written–I doubt that any writer is–but I’d never felt like this before. Was my writing always bad? I asked myself. Have I just been too vain to realize? Is this the reason I haven’t published a book?

I shut my computer. I took off my T-shirt and swimwear. I put on a pair of sweatpants and got back into bed.

Everything in my world was uncertain. Unemployment was confusing, and I wasn’t sure how long the additional stimulus would last. Nobody knew when we would return to work or what that would look like. I hadn’t seen any of my friends since early March. I didn’t even want to go outside to get groceries or go on morning walks with my boyfriend James. The last thing I could focus on was writing.

I started shopping online—surely not the best thing to do when you’re uncertain of money, but then again, I’ve never been particularly good with money. James and I bought some new furniture from Ikea to remodel our bedroom; I got some new clothes on sale (after getting rid of all my clothing that didn’t fit anymore, thanks to “the quarantine 15”); and I became the master of eBay, buying a four dollar hardcover of Breakfast at Tiffany’s, a $10 five-DVD set of Audrey Hepburn movies, and a $30 pair of Givenchy sandals, among many other things.

Soon enough, my anxiety about money became more powerful than my need to shop, and I needed new ways to fill the days. James and I watched a lot of television, rewatching old seasons of RuPaul’s Drag Race (as well as Season 12 every Friday night) and The Golden Girls. We watched some of my Audrey Hepburn movies, and I sobbed at the end of Roman Holiday—I always cry when I watch it, but this was a loud, uncontrollable, tears-streaming-down-my-face sob. Everything was heightened in quarantine–my lows and my highs, my anxiety, and my fear for the future.

May 1st was my two-year anniversary with James. I went all out, stringing clear Christmas lights around the room and covering the bed with a red gingham tablecloth for a stay-at-home picnic.

The night James asked me to be his boyfriend, he took me on a picnic. Everything was homemade. He packed a large wicker basket with a lavender cocktail, delicious sandwiches, and the best pasta salad.

After eating in Central Park, we went to Cafeteria on 17th and Seventh, the place we’d met, and ordered two glasses of champagne. He was so nervous, and I finally said to him, “If you don’t ask me to be your boyfriend, then I can’t say yes. So… you’d better ask me.”

Two year later, it was my turn to pack the picnic. I put the wicker basket on the bed for ambience. I made sandwiches (which I burned) and pasta salad (which didn’t have enough dressing) and a cocktail (that was definitely missing…something). He said he loved it all the same.

I had wanted to order the food from somewhere fancy. I wanted to lay out in the park. I wanted to go to Cafeteria for a glass of champagne afterward. But I had him, and that was all that really mattered.

That’s when I started to realize what’s important to me and how to better take care of myself. For example, in the past, self care meant bubble baths and mimosas, but now, self care became getting enough sleep, eating regularly, and making sure I’m drinking enough water. (And, of course, still bubble baths and mimosas, but on a less important level.) In the past, a perfect date was fancy food and a night on the town, but now it’s being with James, wherever we may be.

For weeks, I heard a commotion coming from outside every evening at 7 PM. People opened their windows and clapped, cheered and banged against pots, supporting health care workers. It seemed so silly to me at first. I was cynical, certainly, but why randomly clap at 7? How many workers were really walking down the street exactly at 7 to hear it?
One evening, watching another rerun of Bob’s Burgers in bed, I decided to go to my window when the clapping began. From the third floor, I saw a man in the street, dressed in generic blue scrubs, turning in a circle and filming all of the open windows. So I opened my window, crawled out onto the fire escape and started clapping.

It’s an incredible feeling to be a part of something like that. Outside, the sound was so much louder than I had imagined, a beautiful chorus of banging metal and whistles and cheers and claps. It wasn’t just the health care workers on the streets—surely every hospital could hear this, every worker could hear this show of support and gratitude. Surely it moved them. Surely it made a difference.

I continued going to my fire escape every night to clap, feeling more than ever before a part of New York City. I finally felt, Yes, we are in this together. We will get through this together. The clapping was supposed to last for two minutes, but it always went longer, often lasting for five minutes, sometimes more, the echoes continuing to vibrate through the city even after we’d all closed our windows.