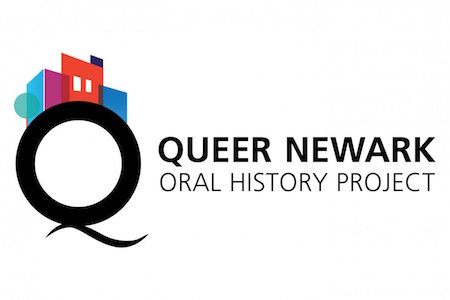 What prompted the initial idea for Queer Newark?
The Queer Newark Oral History Project (QNOHP) was conceived in response to Newark’s LGBTQ community who wanted to have their stories be told. In the summer of 2011, the founders of the Queer Newark Oral History Project—writer, activist Darnell Moore, Rutgers-Newark history professor Beryl Satter, and the administrator of the Departments of History and African American and African Studies at Rutgers-Newark, Christina Strasburger—invited community members to participate in a series of meetings to discuss and define what this project would be.

Newark is a city with a diverse population in which many queer people of color call home. Newark has a rich and vibrant LGBTQ history of queer bars and clubs, ballroom houses, religious communities, AIDS activism, art and artistic venues, entrepreneurialism, and community mobilizing despite facing issues of violence, poverty, and discrimination. There is so much to be gained in our understanding of our queer past when we recognize the full breadth of our history.

Tell me about the LGBT historic walks.
Christina Strasburger had the idea for walking tours in the early days of the project during the initial seed grant. A few years later an opportunity presented itself when Military Park reached out to Dr. Mary Rizzo, Assistant Professor and Associate Director of Public and Digital Humanities Initiatives at Rutgers-Newark who is also involved with QNOHP, to see if we would provide walking tours that would be based in their park.

The tour features both historical landmarks and contemporary sites that have shaped Newark’s LGBTQ history. At each stop, the tour guides share stories about key events and interesting personalities that showcase the resilience of this often-invisible population of Newarkers. It concludes at the Newark LGBTQ Community Center, where those on the tour are often invited in to enjoy the space and meet folks in the community.

Upon establishing the organization and your research on LGBTQ history, was there a specific person or event that occurred in Newark that you were pleasantly surprised to find out about?
QNOHP is made up of many volunteers who are graduate students, Rutgers-Newark professors and staff, and community members. Speaking for myself, I’m currently going into my second year as a PhD student in American Studies, but I came to the project as a master’s student in the History program. I grew up in Kearny, which is a town directly across the river from Newark. And as a queer kid I was very isolated. It wasn’t until I discovered queer and feminist punk music in high school that I realized there were other people like me and that being queer could be a point of pride instead of shame. But I only associated queer culture with this music scene, NYC, and whatever scraps of queer representation I could find in television or film. It wasn’t until 2015 when I went to Rutgers-Newark that I discovered there was an incredibly fascinating and inspiring queer community just two miles from my home.

Tell us about the Queer Newark exhibit.
Sure! It’s called At Home in Newark: Stories from the Queer Newark Oral History Project. It is a traveling exhibit curated by graduate students, including myself, under the direction of Professor Mary Rizzo with help from undergraduate graphic design students led by Professor Chantal Fischzang. The exhibit is based on the project’s oral history interviews and explores different topics such as activism, creative expression in balls, and finding community in bars, nightclubs, places of religious worship, and on street corners. Visitors can hear audio clips of Queer Newark interviewees telling their story firsthand using MP3 players provided by the exhibit or through their own smartphones using the exhibit website (https://queer.newark.rutgers.edu/athomeinnewark). At Home in Newark also features interactive components that allow visitors to “talk back” to the exhibit by answering questions on identity, safety, and bar/club culture in Newark.

At Home in Newark is a traveling exhibit it is available to any institution that would like to host it.