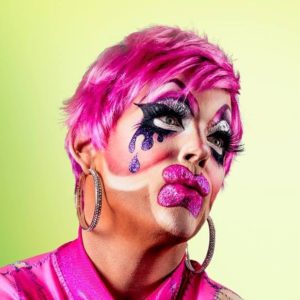 Sandy Devastation has an awful lot to say. This self proclaimed “Brooklyn Bitch” has deep drag roots in her home boro and proudly represents the unique style of drag that is burgeoning from Brooklyn. I sat down to chat with her about the history of drag, where Sandy comes from, Drag Race, and her unique and roaring musical style.

The summer has just ended but the video for “Total Brooklyn Bitch” is scorching! Sandy…she is a LOT!
She is a lot definitely! That girl definitely does have some opinions!

Your name alone is enough to generate some heavy buzz; Tell me where your name originates from?
Hurricane Sandy. When all you heard on the news was “Sandy Devastation” a few years ago, I thought that If I ever do drag, that would be my drag name. Fast forward a couple years and here we are! I still have friends that still think it’s not funny, but hey, it’s drag!

Where did Sandy Devastation originate come from?
You know, it was a slow process. I had always wanted do drag my whole life. I am from the South though, so I always found a reason why I should not be doing it; afraid I would not get laid, toxic masculinity issues, whatever. Two years ago I was going through a really shitty time after a break up and my friend was like “you should do this”! I did it for Fire Island Invasion, and fell in love with it immediately and decided I wanted to keep doing it. Leading up to it, I had decided my name clearly was going to be Sandy and I started drawing what I wanted to look like. I wanted a huge Lucille Ball lip and a Divine-style eyebrow and I wanted to be scary. She was born at Invasion. I kept doing drag, but could not pinpoint what I was going to do, since a drag queen clearly has to do “something”. I had no experience lip syncing and I can’t dance LOL. My friend that convinced me to do drag suggested I rap, and that Is what I started doing; writing music in my apartment.

How do you describe the Sandy Devastation sound?
I describe it as rap/electro-clash. I love bands like The Saint, and Lady Charm and Chk Chik Chick. Nine Inch Nails and Ministry and Jesus and Mary Chain. I don’t really think I am stepping out and saying I created any kind of musical style, but I never have seen anyone else do this style and it just happened. I was tying to create rap music and then just ended up putting in these heavy keyboard parts and I liked it! Larry Tee gets credit for coining electro clash though!

You are super unique, but in places like Brooklyn where everyone is trying to stand out, they can all end up looking the same. is it hard to stand out among some true drag renegades in Brooklyn?
I think it is really fucking hard. you have to find something that you can do that you are good at that other people cannot do and are not doing. I don’t know that its formulated thing where people sit down and think of something “new” because that is super hard. Sometimes you think of ideas that are new to the community that you are presenting to. 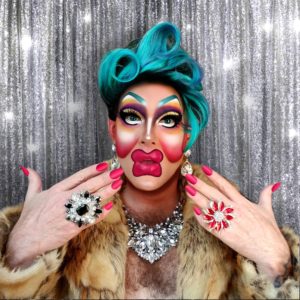 Who are your favorite girls out there nowadays in Brooklyn and beyond?
There are so many! I love Adele Computer, she is fucking hilarious, she does stand up and raps, she is a contemporary of mine. There is a queen named Christ with A Q who is this super fierce lip syncer. Horrorchata, she is the one that throws Bushwig. She and Mary Cherry were the first two Brooklyn drag queens that I ever really saw and I realized that drag did not have to be waist cinchers and lace front wigs, it could be all of this other creative stuff. I definitely am a fan of bears. There is a drag queen that makes incredible costumes named Pinwheel. Patti Splits makes art and has great wig that is braided that matches the visual art that she makes. I feel that there are a lot of queens that are doing their own thing and doing it well. Alotta McGriddles and Acid Betty have been so sweet to me too. But there are so many queens in Brooklyn!

You have not appeared on RuPaul’s Drag Race and you definitely would be bringing your own style if you were to do it; what do you think if the show?
I love Drag Race and I am an addict. I am at the bar with all of my friends weekly and following everything online.
I think RuPaul and RuPaul’s Drag Race have created a criteria for Drag Race that may not be realistic or it should not be realistic. Sometimes its all about how good you are at makeup, lace front wigs, death drops etc. Not totally, but that is what I see many of the girls doing. I think it’s great, and I don’t think that was the intention to confine the limits of drag to what Drag Race is, but it’s all that the young people seem to know about it. They don’t know who Jackie Beat, Divine or Joey Arias are. They just know these “Ru Girls” who are all super talented. I think they fit in a small margin of what drag is or what it could be and I think that can be dangerous.

You definitely pay homage to the rich history of drag, which is admirable.
Absolutely. I can’t remember how old I was when Wigstock happened in New York City, but I got that cd when I was a teenager and that is where I heard all of those queens perform live. Before then, it was just in the gay club scene and lip syncing. They are my idols and that is who I am drawn to. If any of those people went on Drag Race I feel they would fail epically; Drag Race is not set up for them.I believe its important though; it has made drag palatable to so many more people and now we can have Drag Queen Story Hour at the library and people are cool with it!

Where do you want to go from here. “Total Brooklyn Bitch”. and is amazing! It has a Marilyn Manson edge to it for sure, but still is your own.
Absolutely. I told the guy editing it during the chorus to think Marilyn Manson, at least visually. I wanted creepy, shaky and “Blair Witch”-esque. I feel that the message is slightly “abduct-ee”. What it is supposed to be is about freeing yourself. Society is capturing you and holding you down and sewing your eyes and mouth shut. here comes Sandy Devastation and she is gonna cut that shit open. she is gonna cu that shit open. It culminates at the end with an orgy, and that is the message of the video. Super dark and creepy but with a positive message. 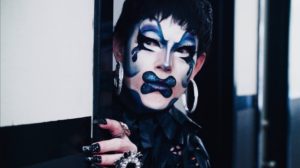 As a performer with what you do, what keep you being so creative and having fresh thoughts?
Honestly, I get inspiration from many things. I don’t look to drag for drag inspiration and I usually try not to look to music for music inspiration. Right now, I am not feeling like I have to look for inspiration. Sandy has been building up in me for so long that I have a backlog of a million costume ideas, hairstyles, songs and everything is shoved inside me deep and exploding inside me right now!