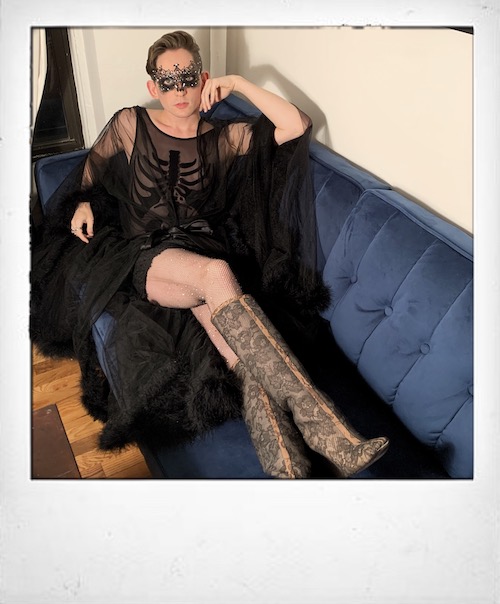 Clue was my favorite game when I was young—it seemed everyone had the board game, and every version was different. (As long as I got to play Miss Scarlet, I didn’t care which version we played—Miss Scarlet is a gay icon.)

Clue also had a series of young adult books, in which poor Mr. Body kept miraculously coming back to life only to get murdered time and time again, that I devoured. (My mom took me to Half Price Books in Des Moines, Iowa once a week to look for them.) And of course, we cannot forget the iconic Tim Curry “Clue” the movie, one of the most quotable films I know.

Now that I’m an adult, I’ve found that a murder mystery party is my favorite kind of party. It might seem Halloween-esque, but every year in November my best friend Jack throws a murder mystery for his birthday.

My favorite part: the costumes. Last year I was a gypsy in love with the richest man in town—we were going to run away together until he was MURDERED. My gypsy was on point in a satin top and flowy beaded shorts, complete with a Prada S/S 2007 runway turban. This year: Omari Black, the morning radio show host who wanted to become a news anchor, from the voice to the voice and the face (and I’d do anything to get the job—even… MURDER). The theme was to stick to your namesake color and dress for a masquerade, so I wore all black: a skeleton bodysuit, lace shorts, bejeweled tights, lace Valentino boots, a Swarovski crystal mask and—the pièce de résistance—a floor-length sheer robe with marabou feathers. I was the most glamorous radio host that ever was.

Jack used every room in his apartment to set the scene: The spare bedroom was a speakeasy, complete with a bartender for the night (who offered several clues along the way); the main bedroom was set with a table in the middle for group discussions; the living room the ballroom, playing old music on Alexa.

After stuffing my face
with an array of mac and cheese balls, pigs in a blanket, mini egg rolls and the like (if you’re going to serve alcohol all night, finger foods are a must), I got into character and met the cast. There were 16 guests, a mix of old friends, new friends and some people I’d never met. (I had the most fun with the strangers—it was easy to stay in character and not get caught up in real life.) Jack got the murder mystery kit from mymysteryparty.com, which came with clue cards for each character for three separate rounds.

Three green apple martinis later, half the room guessed I was the murderer (which I wasn’t), and only one of us guessed the right fiend. The bartender awarded several ribbons: I got first place for best costume.

Afterward, Alexa played on long into the night while we drank and wondered which of us would get murdered next year.