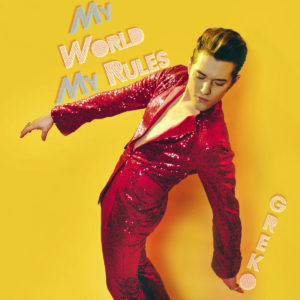 Vivacious music sensation, New York’s own Mike Greko will be premiering his fiery new dance track, “My World”, at what promises to be the hottest Halloween party on the planet, happening on Thursday October 25th from 10:00 pm until 4:00 am, at “Fishbowl” in The Dream Hotel Midtown. The party is dubbed the “Dead Celebrity Ball” and will feature tracks off Michael Jackson’s “Thriller.”

The LIVE performances will kick off at midnight with GREKO hosting the evening and Mike’s band preforming live. Guests are to include some night life favorites such as Coby Koenig, Shannon Conley, Amanda Lepore, Michael T, and DJ Sammy Jo.

I spoke to Mike in detail regarding this Halloween extravaganza as well as his powerful and energetic re-invention of himself. As one of the most talented musicians present today, Mike Greko is an inspiration to the music industry, proven via his newest single “My World”.

You are set to release some brand new music, describe it please.

Yes! I decided to take the last year off from performing LIVE with GREKO in order to go into the studio and write as much as I could. I wanted to explore a more contemporary pop approach to the classic disco/dance/house sound I love. I guess some would call it NU-DISCO/POP…But I just like to think of it as feel good party music haha. I didn’t want to hold back anymore with anything personally or creatively, no one ever should. This first new single “My World My Rules” coming out on October 26th, pretty much sums up that overall message.

How is your new music and your new brand unlike your music and style in the past.

Well I would say that’s it’s more outlandish, more modern, and definitely more in your face than what I’ve done previously. I decided to go extreme in the pop direction production wise, while still maintaining the bands retro esthetic and personality. Ultimately, my goal is to always be as honest as possible with the listener as to who I am and what we represent on stage. However, this time around, the focus was to make it more accessible to the mainstream audience. We wanna spread the fun and love to as many people as possible this time around. I’m determined, hopeful and excited about it! 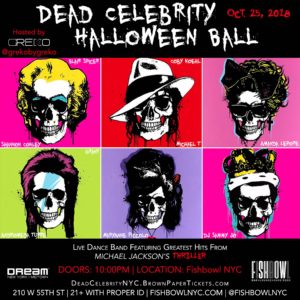 Where, when and how can people attend your Halloween extravaganza & release party coming up?

Ah yes, the 2018 Dead Celebrity Halloween Ball! It’s going to be such a fun night and most likely a very debaucherous one as well haha. The event is on Thursday, October 25th 10:00PM – 4:00AM at FISHBOWL in The Dream Hotel Midtown. I’m so happy that they were able to make this party happen and have GREKO host the night! There will also be a group of my favorite personalities, and performers from NYC’s nightlife scene hanging around too: Amanda Lepore, Michael T, Shannon Conley, Coby Koehl and DJ Sammy Jo to name a few off the top of my head. My band will kick off the LIVE show around midnight.

What inspired the idea for combining your new music release and this party? I also read something about a Michael Jackson tribute that night!

Actually, the word party itself and my definition of what a good party involves is exactly what inspired this new music. It only made sense to release the first single during a crazy NYC Halloween extravaganza. In regards to Michael Jackson, It’s funny, because while we will be performing a few original songs, 60% of the show will be greatest hits off his album “Thriller” with guest singers joining us on stage for a few numbers …That’s basically our nod to the “dead celebrity” aspect of the night. Plus, you know, we really relate MJ to legendary pop music, dancing and massive amounts of fun. All inspirational aspects for our new music!

You also have a very cool event about to happen with Sharon Needles, tell us about it.

Sharon!!! Honest to god (there is no god according to her), she has recently become my favorite human being and I’m obsessed with everything we do together. She is undoubtedly one of the smartest, funniest and most talented people I’ve met thus far in my journey as a performer. I can’t say enough about her. She recently created a show called “Celebrity Morgue” which we have been touring these past few months. Basically, it’s a show where you want to cry for all different reasons… happiness, laughter, sorrow, and because she’s a rotten person haha. It’s genius, and we will be doing a run at the Laurie Beechman Theatre from October 9th to the 14th. You do NOT want to miss it.

If you could have your ultimate stage fantasy, what would have to happen.

I have a lot of stage fantasies… ultimate is difficult to say. I guess currently, for the time being, it would be to look out into an audience and see more than just my mom and dad singing lyrics to a song I wrote haha! What I mean to say is, it’s a great feeling of validation to see a large group of audience members that are essentially strangers, intimately know, enjoy and connect to something you worked so hard to create. I remember seeing Paul McCartney in concert, watching all 60,000 people singing every single word. I was thinking “whoa he must feel amazing right now”

Will there be a tour in support of your new sound?

Not yet, we still have a whole bunch of music to release between now and this coming summer! Maybe in Fall 2019 though!

Aside from music, what are you about?

Well as I always say, music is my whole life really. The arts, entertainment, nightlife, all these socially heavy things take up a lot of my time. I honestly love it and would not have it any other way. However, I would definitely say that personally, I’m about a lot of other things and I’m more complicated than what people see on social media. You know, you look at a persons Instagram, Facebook, Twitter etc and people just assume that’s the person you are. Truth is, social media was created so that everyone can boost their self-confidence, taut their cool happenings, and basically make normal life look and feel more glamorous than it really is haha… that’s all fine and good, we’re all guilty of doing it. However, outside of all that, I’m a pretty simple person, I do regular things and I love it. I think a lot… especially about society, politics, morality, and the choices that we make every single day and how that can affect other people. In short, I’m about being your true self, living your best life, not walking around with an ego the size of an elephant and treating people with kindness no matter how hard it might be or how difficult they make it for you to do so.

My World My Rules Teaser Trailer