Hi, Daniel. Thanks for chatting today! How was the Hot Sardines show at Birdland the other night?

The Sardines are my absolute favorites. The show was a fucking rollicking good time. I will have them at Red Eye soon, so keep your eyes peeled. I took my biz partner Taylor, who got stares because let’s just say Covid has made his ass even more…zaftig. As I like to say: When I tell Taylor to haul ass, it takes him two trips! We had fun.

Things are really coming along with Red Eye NY, the new bar/venue/coffee house you (along with your business partners Taylor Shubert, Adam Klesh and Sam Benedict) are opening right next to the Port Authority in Manhattan. What’s something you’ve learned about building your own business from scratch that folks who want to do the same need to know?

PATIENCE–something I’m not known for. It’s been a long, arduous process of building a club from scratch. And location is key! During the “pan-Demi Lovato”, I kept telling people on social media that THIS IS THE TIME TO OPEN YOUR OWN BUSINESS. Rents were down, NYC was sad, and we all had time. I was busted, disgusted and couldn’t be trusted…But I pulled myself up by my bra straps and came up with this business plan almost two years ago (December 18th). I started looking at venues, and there were a LOT. But then we found this space and this “locache” is a trade parade! Married trade walking by from Port Authority, Jersey trade, Black trade, white trade, Broadway trade…it’s all flopping around 41st Street. Buses just delivering men to our doorstep. LITERALLY. That’s when we knew we’d found it. We called my officemate Gil Neary–he invested in it as well–and bam, we started construction, which has taken FOREVER.

Let’s talk about what we can expect from Red Eye. First off…coffee! Folks can get their caffeine on during daytime hours with a full service, upscale coffee bar as soon as you walk in. What’s the coffee business like, and what will make Red Eye special to that effect?

Well, lots of my friends like…how shall I say it? Let’s just say people love to be “up” in the club, so we are blending our love of coffee culture with nightlife to create a buzzy, late-night hang, which is more natural than some uppers, sans fentanyl, and will get your twirl on! Plus daytime, which is unique–you can come in from 7 A.M. on and have a coffee, cruise, work on your great American novel, read or listen to your favorite podcast- LIVE! Sam (Benedict) is creating a cunty coffee menu that will get you up so you can carry on. Our motto is “Come for the coffee, but stay for the TEA!” 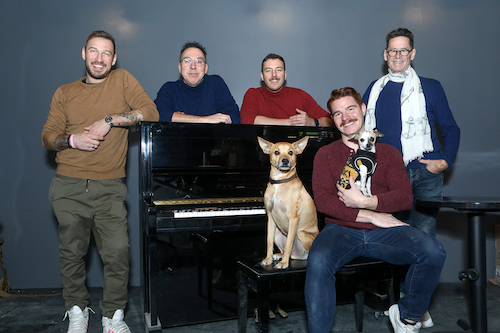 You’re gonna have something during the earlier hours that not many other venues have in NYC: live podcasts! We all love podcasts. Freddie Cosmo and I are doing one right now, upstairs from Red Eye, that will move downstairs into the venue when it’s ready for us! How amazing and talented are we, and who else might podcast fans be able to see (and hear) on that stage?

First off, you guys are so fun in your podcast! I used to have a podcast with Bianca Del Rio called Dlist Radio from 2006-2009 and the press named me “the Podfather”, so I think I can safely say I know a little about the platform! Covid was very…traumatic for me, as I am sure it was for many, so I listened to a lot of podcasts. Plus Sam and I produced a serial podcast with Lorne Michaels (SNL) for Audible that was a hit, so we worked in that world and have a relationship with Audible, who are bringing us a few popular ones, so we figured why not bring our love of podcasts to the coffee bar? So from 4-7 during happy hour, you can go in the back and listen to you and Freddie talk about nightlife, amongst other Pods! Plus we are talking to Nicky Doll about one in French (!), Ty Sunderland and Linux about their wild nights out, obvi a Drag Race one, and I am working on one called Trigger Warning that will get my few detractors into a tizzy. And a fun political one from Taylor. He’s a hothead, so get ready!

In later hours, Red Eye will become a full service bar with a huge stage that could showcase a variety of shows, from drag to jazz to musicals to movie-viewing parties. What have you got planned?

We have a huge big band called the Big Swing on December 30th with performances by Jeanna de Waal (Diana the Musical), Seth Sikes, Cacophony Daniels and Amber Martin, which will have a 1920’s swing vibe. Then we bring you John Cameron Mitchell and others for a Jayne County Tribute night where the proceeds benefit translifeline.org 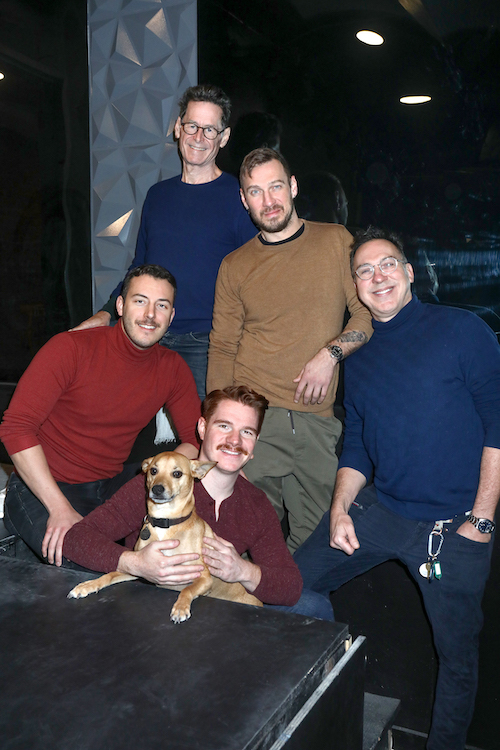 Then, of course, Bette Bathhouse and Beyond, Devil Wears Nada and our infamous legendary underwear parties. And a major focus on dance-with DJ’s like Johnny Dynell, Alexis Tucci, Joey with the Mustache, Corey Craig, Ana Matronic…etc.

And the downstairs area will open later, but I believe anyone who’s been a fan of your Ice Palace underwear parties will be quite happy there! What can you tell us about that enterprise?

What can I say? Cock is my business and business is good! Downstairs will open a couple weeks later than upstairs, as we have some surprises in store. We’re affectionately calling downstairs the Cockpit, as we had to dig four feet of the basement out to create it. It’s a sexy bunker of music and men, which will host shenanigans like Strip Trivia, techno, a rock and roll sexy party called Dirty Deeds (Done Dirt Cheap), a cock shot luge, and no drag queens shouting “Make Some Noise” at you–that’s relegated to upstairs.

Everyone wants to know…when will RedEye open?

Mid December, 100%. It’s been a nail biter for sure. But as Elton John told my buddy Jake Shears after the Scissor Sisters’ first album was a hit and the record company was pressuring him for a second: “Take your time. No one will remember if it (the second album) took long. They WILL remember if it was good.” Red Eye NY is a combination of all the things I’ve learned from owning and working in other clubs. I took what I learned, realized that gay guys (and everyone else) don’t really have a daytime, non drunken place to hang out and flirt, and we set upon building that.

Tell us more about the event you booked for the night before NYE: “The Big Swing” featuring Vince Giordano and the Nighthawks, Amber Martin, Seth Sikes and Jeanna de Waal.

Yes, I love Vince. And Jeanna, Seth and Amber are some of my faves as well–plus we added Cacophony Daniels to the lineup! It’s gonna be a perfect date night to celebrate NYE Eve.

Speaking earlier of the Ice Palace in Cherry Grove, Fire Island…y’all bought it and you’re gonna put a lot of work into renovations. That’s another massive undertaking we’re all looking forward to! What can you tell us about the current state of the Ice Palace and what you might be planning on doing with it?

We gutted the old bitch, threw away 20 years of old speakers and mixers and I think we even found an old drag queen in the back! Not to say anything negative about the old owner, but it needed a desperate infusion of love and caring and programming. I am bringing back the Icon Series to the Palace, with some major Broadway talent, plus my faves Maragret Cho, Dina Martina and jazz band the Hot Sardines, plus my sistrix Ana Matronic is coming on board as Ice Palace historian and resident DJ to bring back the historical Tea Dances, Nicky Doll and I are working on a big party together, and there will be a complete overhaul of lights and sound–the old girl’s getting a nip and tuck! Plus my brother Adam (Klesh) is booking Saturday night DJ and giving you the Saturday night you deserve, the way the Pavilion used to do it.

Anything else you wanna plug or mention? Are you buying the Q, lol?

Haha, my dance card is full. Nowadays, I’m getting people writing me and asking me to invest in their ideas, and I’m like “I cannot invest any more time into the gay scene. Daddy needs to read a book now and again.”

Finally: What’s the best liquor that goes with coffee?

You’d have to ask Sam about specific drinks, but I’m kind of vibing on this banana liqueur we have in the club now. A splash of that in your espresso and it cures what ails ya! 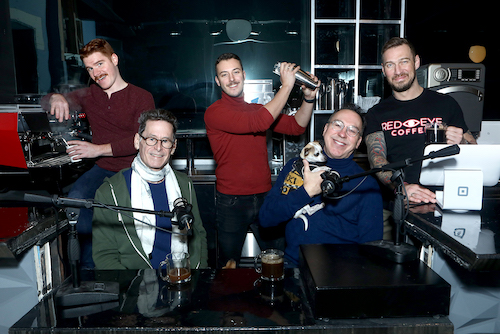