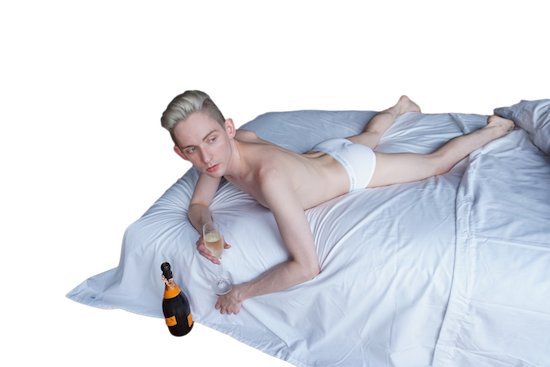 On New Year’s Eve, a haze casts over the city, everything looking a little different, more romantic. It’s during special occasions, a veil of champagne pulled over our eyes, that we remember how charming New York can be.

We put on our very best—for example, a silver sequined top and velvet blazer by Michael Kors. (Both still hang in my closet, for special champagne-drunk occasions.)

New Year’s Eve also puts a lot of pressure on us, pressure to find someone, to become romantically entwined, even for the night, even for a moment. At least long enough to have a midnight kiss.

A few years into New York life, I had a romantic thought: Fuck New Year’s Eve. Fuck the sequined tops, fuck the velvet blazers, fuck the $100 open bars and fuck the midnight kiss. That year, I refused to feel alone for being single on New Year’s Eve. I wouldn’t let the holiday win.

…Until a friend from Iowa called and said he was coming up for the weekend. We worked together at Abercrombie & Fitch, back when we were in college, and had many drunken nights together.
He told me he wanted the “New York experience” for New Year’s Eve, and I was expected to give it to him.

So, I bought a new sequined top—H&M this time, to keep myself in check. I wore the same velvet blazer, this time with a pocket square fashioned from a small piece of sequin material. I paid for the $100 open bar, and even bought my friend’s ticket. And my goal became to find that midnight kiss—for my friend, not myself.

Quickly upon arriving, we got our first “free” glass of champagne and I saw a familiar face: a server at the restaurant I worked at. My Iowan companion, tall and tan and naturally blonde, had no problem making friends, and before I knew it the two of them were on the dance floor, grinding on each other like there was no tomorrow.

I returned to the bar to keep drinking and get my $100 worth.

When the clock finally struck midnight, I couldn’t find them anywhere. Finally I spied Iowa in the outdoor patio, on his knees, sucking my coworker off. What a way to ring in the new year.

I returned to the bar again. It was just another midnight, spent alone, just like so many other midnights have been. But this midnight, this one midnight a year, always felt different. I tried to fight it off. I tried to drink another glass of champagne and smile. But suddenly, overwhelmingly, I felt alone.

The holiday had won.

Iowa found me 10 minutes later, too drunk to go home with anyone. I took him for dollar pizza, where he asked to see my phone and immediately dropped it, shattering my screen. I was glad to get him onto my couch without him vomiting in the taxi. What a way to ring in the new year.