Popular New York City night life go-go boy will be appearing on MTV this week in the series, ‘True Life” Thursday, Nov. 10th 9pm. The handsome dancer has won numerous Glam Awards, loves his work, and is desired by many.

Get Out caught up with him and shared some interesting questions and answers…..

Tell me what’s going to be happening on MTV?
This week an episode of the long running documentary series “True Life” will be premiering on MTV all about the lives of two go-go boys. Both Sam Gee of Vancouver and myself were approached by Gigantic productions & MTV to be a part of the project. Honestly, I have to say I was really nervous because I’ve never done anything like this before, but I thought life is all about taking chances, so why not? Also, I was happy to be a part of something that shows the behind the scenes looks of people involved and nightlife. I think Go-Go boys especially can be seen by those who view them dancing in the clubs as very one dimensional. This MTV special shows both my persona in the club and the many facets of my everyday life outside of that environment. I haven’t even seen it, so I’m excited to see how everything comes together! We filmed throughout the whole month of June up until they pride in New York so there is a lot of material we covered.

How long have you been dancing and what motivated you to start?
I first moved to New York City at the end of 2007 to get started with my degree at FIT in photography and the digital image. I’ve always been artistically inclined ever since I was a kid, and loved tapping into my creative side as often as possible. I was supporting myself financially and was working in retail as my college job on the side, but soon I was approached to dance at G lounge in Chelsea. I was really apprehensive and didn’t think I had the look for it, but I gave it a shot, I used to be nervous Everytime I went to work! But, after a few months, my confidence built and I got approached by other venues and events to dance for them, it was a snowball effect in the way things progressed with nightlife. Before I knew it, I was dancing at a different venue 5 nights a week, on top of being a full time college student. I was pretty worn out with that schedule, but I loved this new and exciting part of my life.

How does it feel to be one of the most popular and best liked dancer in the city?
I remember a few years back getting my first nomination for GoGo boy of the year, in the Glam Awards, the Odyssey Awards, and Get Out! I couldn’t believe it, I was really grateful, it’s such a great feeling to be both accepted and appreciated. There’s so many great guys Go-Go’ing in nightlife, and I think everyone has something unique to offer, from their look, to their moves, and the energy they bring to the events they work. Knowing that people continue to enjoy having me as part of some of the best parties is pretty amazing. This has been an awesome time in my life, and sharing a little piece of it in “True Life” was an unforgettable experience. Although I’m ready to see what life has to hold outside of nightlife, I love what I do and hope to continue to give my all as a Go-Go and a valued part of the scene. I really couldn’t be more grateful for the support I’ve found on the scene.

How did you come to do the MTV gig?
A few years ago I was approached along with A number of other very popular go-go boys on the scene to be part of a reality show that was being cast. I’ve never been a huge fan of some of the more popular reality shows, but when the premise of the show was explained I thought it was something that could be really interesting to be a part of. After the initial interviews and casting I didn’t really hear much about it again until gigantic and MTV asked me to be part of “True Life.” From there, things actually happened really quickly and before I knew it June had begun and I was filming constantly. I have to say it takes a little getting used to all the cameras that are following you throughout your day. It’s definitely a unique experience and I’m really glad that I was a part of it. I hope everyone that reads this article will have a chance to see the show for themselves. “True life” is very different from many reality shows out there as it is more of a documentary. Nothing is scripted or manipulated, it really is a true life depiction. I didn’t really hold much back because I wanted to show my true self. So, you see my goofy side, my playful side, my serious side my vulnerable side, and everything in between. I’m excited to see what people think and how they’ll react!

What do you like best about dancing?
There’s a lot of things that I’ve come to love about dancing and being a go-go boy I think it’s being part of the atmosphere of the events that I work that really feels rewarding. You get to be part of some of the greatest memories that the partygoers have. In the last few years I have had some amazing experiences dancing for events all over the place, taking me to so many different areas of the country and the world. I try to make the most of every event and moments that I have as part of this amazing scene. I know many years from now I’ll look back at this part of my life and be very thankful for the experience. Some of my own best memories and some of the greatest people I’ve known and have in my life have been because of my involvement in night life. It’s been an incredible journey so far and I’m sure there’s some really fantastic moments to come. That’s one of the good things about never knowing exactly what the future may hold.

Anything else that you want to permits for yourself?
In the episode, one of the things I loved about the show was showing my life in the context of my late night job as a Go-Go, and my every day life. So by night you see me as the go-go that everyone knows me to be, but you see many of the other facets that make up my journey. A few years ago I graduated from college with my BFA in photography and because I support myself, it’s been hard to get that off the ground. But, as you’ll see in the show, I’ve made some really amazing connections and gotten to know some great people in the industry, and I’m trying to get my career off the ground. There’s many endeavors that involve my creative side that I would love to explore now and in the future. And, I hope that those who follow me in nightlife will come to see the bigger things that I can do and accomplish. I think we all have big dreams and that’s certainly true for me. Many of the those that I’ve come to know and love that might be part of my future outside of nightlife, are ironically those who I may have never met if it wasn’t for being in the club scene. From my closest friends, to Mark, the love of my life that will see you in the show, and those who I am building professional connections with, my place in nightlife was a catalyst to knowing all of them. I have a lot of hope and so much in store and I plan on doing and accomplishing in the years to come. Last year I worked on a collaborative project with my boyfriend Mark for the advertising layout of the 2015 Pines party. This let a lot of people involved and nightlife see what I had to offer as an artist and not something I look forward to doing more of in the near future. And as for Go-Go’ing, i’m having a great time being in nightlife, and plan on being the best that I can be. Even after dancing is no longer my job, I’ll always find time to turn it on the dancefloor! The dancer I am will always be a part of me that I embrace and love, and it’s funding that part of myself that makes me who I truly am today. 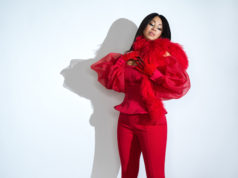 CeCe Peniston Special Performance at Night of a Thousand Gowns