The British-born turned New York rockers recently released their third studio album Bonds on June 23. This marks the first album for the group since 2010’s acclaimed You Are the Night. They’ve toured the country numerous times with gigs at Lollapalooza, and accrued a string of placements by the likes of MTV, VH1, Rockstar Games, EA Games, and more in the process.
The band’s catalogue of indie synth sounds travels the spectrum of music history with hints of The Doors and Cream with a dash of Poe, Goldfrapp and Franz Ferdinand. The foursome includes guitarist Kris Kovacs and front-woman Ellie Innocenti, who write and produce all the band’s turbulent, up-tempo trills.

When not working with Deluka, Kovacs is also a remixer and has produced remixes for Kesha’s “Tik Tok” and Britney Spears’s “I Wanna Go.” The anthemic first single off Bonds, “Home,” is true to the band’s vibrant synths, towering guitars entwined with Innocenti’s captivating vocals – the perfect introduction to the next phase of Deluka.

Get Out Mag chatted with front-woman Innocenti from the band’s new home base of L.A. about the message behind Bonds, their haunting yet hopeful sound and a possible upcoming tour.

GET OUT MAG: What story are you telling with Bonds?
ELLIE INNOCENTI: I felt Bonds as a title was pretty fitting as it’s all encompassing. People are bonded together in so many ways – through blood, through love and friendship, even contractually and financially. Being involved in any of those relationships makes for the kind of highs and lows, the joys and the tensions that make you feel compelled to write a song.

Your new EP is described as having an “uplifting newfound spirit.” Can you elaborate on that? Was there a life change between 2010’s album and this one?
Yeah, I guess the sound creates that feeling more than anything with its big melodic chorus’. Lyrically, I still write about stuff that affects everyone, heartbreak and angst, etc. With all of us having our own places for the first time after our move from NY to LA, it really allowed me the personal headspace to be able to put things into perspective; put a more positive spin on things. I can’t deny that the L.A. sunshine played its own part too – [from] the mountains to the desert just down the road. Kris and I are both visual people. A change of scenery can do wonders. It put like a golden filter over the mundane!

I read that you worked with producer Tim Pagnotta (Neon Trees) on Bonds. What do you feel he brought to your already successful catalogue of music?
Tim made the recording process a very positive experience. He’s the first person outside of the band that’s really connected with us in that environment. Plus he’s super funny and has an amazing ear for a pop melody. He was able to tell us when to reel it in sound-wise. We have a tendency to throw too much at the sound and the airy feel on Bonds is partly due to Tim keeping us restrained at times and us being willing to trust him.

You’ve worked with other famed producers like Dan the Automator. Who, that you haven’t yet, would you like to work with?
We write in such a way where we kind of create the sound as we go along so anyone who is brave enough to step into that equation has to be ok with our need for control! That’s why it was amazing to connect with Tim. There are so many amazing people we’d like to work with. Even from long before his success with Adele and Florence and the Machine, we were massive fans of Paul Epworth’s production with fellow English indie bands with a dance sensibility like The Rakes, The Futureheads and Bloc Party. We love Jim Abiss, Jags Kooner, James Lavelle, Liam Howlett from The Prodigy…I could go on!

I’m sure you’re aware of your huge gay fan base.  How much does your gay fan base have an effect on what you record in the studio or perform on stage?
People are people, gay or straight or anything in-between. I think everyone has the same capacity for emotion and at the end of the day we write songs about real things, real love, real things that piss us off, subjects that make you feel something. I think everyone can relate to those things. We want our music to be inclusive of everyone.

I read that the band name “Deluka” came from Pretty Woman. Is that true?
It is! It’s no secret we named ourselves after Kit Deluca, the sassy best friend of Julia Roberts’ character. A tart with a heart! She had the best one liners in the film and we needed a name so…

Besides that, you have a very new wave sound. Is it safe to say, your music is influenced by the 80’s?
Not exclusively, no! We were born in the 80’s and there are loads of amazing bands we love from that time. But really, the fact that we use synths and guitars to write with, was more because that’s what we had around at our disposal. As we started to develop our sound, they became instruments we enjoyed working with.

Who are your musical influences??
We have many! Kris and I were talking about this the other day and the honest answer is, those early to mid 00’s, British indie bands like Primal Scream, The Rakes, Franz Ferdinand, Kasabian and Bloc Party. They really played a massive part in our youth by making us feel excited to play our guitars. We would go to an indie club and be the shy, non-dancers but be absorbed by the way it made people feel. It was alternative music with this epic dance quality and we’ve always wanted to capture that energy in our recordings and our live shows.

I see that you’re touring locally. Will this tour branch out of California?
Hopefully soon! 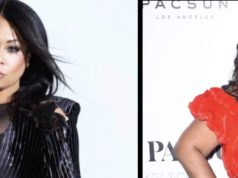