NewMusicShelf has released the first-ever volume of songs written for and/or by transgender and nonbinary people.  Anthology of New Music: Trans & Nonbinary Voices presents composers who highlight the multifaceted intersections unique to the lived experiences of transgender and nonbinary people and stands as a declaration that despite the many historical attempts to isolate them, these communities will not be silenced.

Their voices are beautiful, and through printed compositions, the anthology spotlights these important artists so that the world can recognize and revel in their beauty.

“As a trans nonbinary singer, I often found opera and musical theater compositions to be aggressively gendered and binary,” reflects Aiden Feltkamp, the book’s curator. “I was at a loss for repertoire that spoke to me.”

They approached Dennis Tobenski, a composer and vocalist who runs a boutique music publishing company in New York City, with the idea to build a collection of vocal and piano music that centered on identity.

While typical NewMusicShelf publications focus on a particular instrument or voice type, what Feltkamp was proposing would be like no other anthology before — a first of its kind. However, it was a concept that Tobenski, a gay man, could relate with. In the early 2000s, Tobenski recalls very little music featuring a man loving another man. “What did exist wasn’t exactly visible for a kid like me growing up gay in the cornfields of Illinois. I was forced to either sing about loving women, coopt soprano repertoire about loving men, or not sing about love at all.”

Tobenski and Feltkamp envisioned NewMusicShelf Anthology of New Music: Trans & Nonbinary Voices as an opportunity to present songs music lovers could connect to without the barrier of gender. They decided selections would include all vocal ranges in multiple music styles that told a variety of stories of the transgender and nonbinary experience. Their only criteria: 1) the composer is trans or nonbinary, 2) the lyricist is trans or nonbinary, or 3) the song was written for or premiered by a trans or nonbinary singer.

Feltkamp chose Yoshi Weinberg’s “Captain of My Soul” because the piece represents the traditional art song. It artfully blends contemporary composition with fantastically haunting and dramatic poetry and “is an ideal song for an undergrad or graduate level recital,” Feltkamp, a Turn the Spotlight fellow and graduate of Bard College Conservatory’s Graduate Vocal Arts Program, attests.

They selected Pax Ressler’s “Love Song for Me” for inclusion in the anthology because of its up-beat, pride-centric theme. “I hadn’t considered including singer-songwriter songs in the anthology, but Pax’s work fit the inclusion criteria and was simply too good not to include,” Feltkamp continues.

Tobenski and Feltkamp hope the pieces in Anthology of New Music: Trans & Nonbinary Voices will be a resource for voice teachers and presenters and reach audiences beyond the book through live performance. 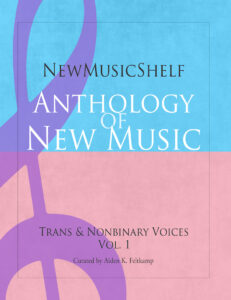 “Now no one can say that there aren’t any roles for trans/nonbinary singers or that there aren’t any trans creators in opera and musical theater,” Feltkamp reflects. “My hope is that the collection is a jumping off point that encourages readers to seek out more works by these, and other, trans and nonbinary composers.”