SHARE
Facebook
Twitter
RICKY REBEL BOLDLY PROCLAIMS HIS ATTRACTION TO “BOYS AND SOMETIMES GIRLS
Glam Rocker Releases Sexual Liberation Anthem To The Dance Floor
Glam rocker Ricky Rebel is aiming to tear apart the dance floor – and rules of social convention – with his explosive new anthem on sexual liberation.  “Boys and Sometimes Girls” is being called the next generation’s “I Kissed a Girl”, but takes Katy Perry’s bold proclamation a step further.  Produced by Rebel,  “Boys and Sometimes Girls”  is about the androgynous artist’s interest in both sexes.     “Sex is like being a performer,” he explains. “The good ones can sing ballads, pop, rock, rap, and opera.  There are no limitations.”
“A lot of people refuse to believe that bisexuality is a real thing,” he continues.   “They think we are ashamed of being gay so we make up this lie that we like girls too.  It’s not true. Some of the best relationships I have had have been with women and I want everyone to know it.”  Ricky Rebels’ “Boys and Sometimes Girls” is available on iTunes now.
Ricky Rebel has made a career by flipping his finger at protocol.  He draws inspiration from Elvis Presley, Prince, and Michael Jackson; musicians with strong images who were larger than their music and weren’t afraid to defy social norms.
Like them, Rebel dresses the way he wants and doesn’t follow trends; he creates them.  “If you believe in something, you have to shout it out loud to the world and make sure you are heard,” he says.  “I think most people in the world are bisexual.  Religion and society keep many of us from being sexually explorative and honest.”
In his single “Star,” Rebel invented the possibility of being a star, inspiring fans to be celebs in their own lives. The song and its message caught the attention of Hector Fonseca, the world-renowned DJ who has had fifteen Billboard number-ones with artists including SIA, Beyoncé, and Katy Perry. With the Hector Fonseca remix gaining spins in nearly twenty countries, Rebel unleashed a party themed music video that featured him with his dancers, the Rebel Mafia, in all their voguing fierceness.
Ricky Rebel delivers another strong, personal message in “Boys and Sometimes Girls”. “A lot of people still hide in the closet. It takes courage to be open about what you like in the bedroom. I believe people should not be afraid to express their sexuality because sex is fun and it shouldn’t be something that we’re ashamed of,” he says.
Ricky Rebel burst on the music scene in 1997 as the lead vocalist of the boy-band No Authority. Signed by Michael Jackson to Michael’s MJJ Music label at Sony, he toured with 98 Degrees, Destiny’s Child, Aaron Carter, and Ashlee and Jessica Simpson.   In 2000, the band moved to Madonna’s Maverick label where they released “Can I Get Your Number”, a song that peaked at #33 on the Billboard Top 40 chart.  Another song, “I’m Telling You This”, appeared on the Rugrats in Paris soundtrack. While with Maverick, the band toured with Britney Spears.
In 2004, No Authority broke up and Ricky became the lead vocalist of the band, Harlow. Additionally, he did voice-over work for films including Apollo 13, Anywhere But Here, and Anastasia, and appeared on television in episodes of American Dreams, Boston Public, and Audrina.
Ricky went solo as Ricky Rebel in 2012. Since then, he has released two albums, Manipulator featuring the singles “Geisha Dance”, “Get It On” and “You Need a Woman” and The Blue Album featuring “Star” and “Boys and Sometimes Girls”.  Fonseca remixed “Boys and Sometimes Girls” for the dance floor.  “The remix is sexy,” continues Rebel. “It pulses, throbs and thumps.”
Music video and movie director extraordinaire Rock Jacobs directed the song’s music video.  It was mixed and mastered by Claudio Cueni who mixes for Jennifer Lopez. The video features members of The Rebel Mafia, as well as  Becktoria, a female vocalist Rebel found on Instagram. “I thought that she would be a good flair to add to the video because a lot of women can relate to this song too.”  MustaeV Makeup also has a starring role in the music video.
“I use MustaeV Makeup everyday,” Rebel explains. “I seriously love the way it feels on my face, so silky and smooth.  It was my idea to make a music video slash commercial for MustaeV because I want my fans to know every facet about me, and makeup is a big part of who I am.”
Ricky manages to get his patented Rebel Standing Split into the video.  “That’s my go-to red carpet move,” he explains. “It’s quite popular with the paparazzi. When I’m in front of the cameras, the photographers always yell out, “Rebel, give us the leg!”
“There is a real message behind all the fierceness,” he continues.  “I hope to encourage everyone to rebel against darkness and shine their personal lights.  Be bold, be you, even when everyone else tries to make you normal.”
“Boys and Sometimes Girls” is available on iTunes now.  For more information, visit www.rickyrebelrocks.com. 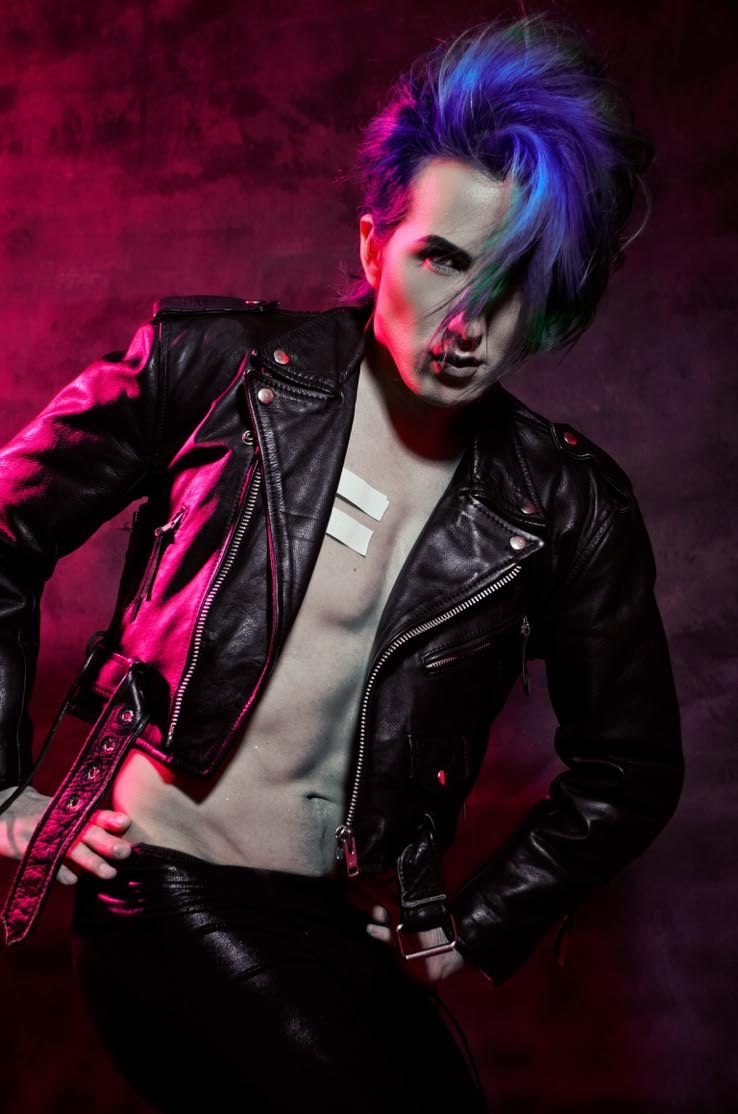