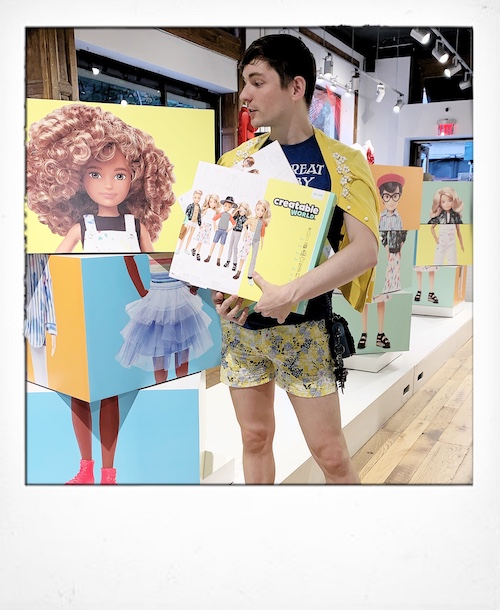 Last week I wrote about Therapy’s soul-fulfilling new brunch, Sunday Services. What I didn’t mention is that afterward my boyfriend and I, drunk and drunker, boarded a downtown train to The Phluid Project.

I’ve been to several events at The Phluid Project, New York’s gender-neutral clothing store. I’m familiar with their beautiful employees, their brightly colored windows and their shoes tall enough that I’m not sure I could walk in them. But there was a new display that I wasn’t familiar with.

Stretching across the center aisle was a set-up for Mattel’s new dolls, called simply “Creatable World.” The individual dolls don’t have names, because Mattel doesn’t want any labels attached to them: Creatable World is their first gender-neutral doll.

If you’ve seen the ads, you get the gist: The dolls have short hair and come with a long-haired wig, as well as clothing from wedges to sneakers, skirts to camo pants. The idea is simple: The dolls can be whatever their creator wants them to be, and can change as they want them to. No labels and no shame: Let kids be kids.

I couldn’t believe what I was seeing. My parents believed in letting me be a kid. When I wanted Barbie, or all five Spice Girls, or Sailor Moon (and it was usually one of the three), my parents had no problems with it. (Of course, there’s always fear that your child will be bullied, but is that worth suppressing who they really are? My parents, luckily, said no.) I had a specific doll from an anime that was my favorite: Lain. She had a flat chest and short hair; sometimes I would pretend she was a boy, putting her in baggy pants from a Bratz Boyz doll.

And here it was: the doll I always wanted, but didn’t exist. Two of the six dolls looked like my boyfriend and I, and our vodka-soaked brains didn’t need to think twice.

I called my mom to tell her about the dolls. She told me that, on a recent vacation, she woke up early and went to the beach to collect shells. While walking along the shore, she had a thought: I’m playing. I’m on an adventure in a new land, on a quest for the prettiest shell. I could hear her smile on the phone. “I don’t remember the last time I’d played,” she told me.

She’d already seen Mattel’s Creatable World ad online. “When I saw the child with the buzzed hair in a tutu playing with the doll, it reminded me so much of you.”

It’s a beacon of hope in the world we’re living in. Despite reading about fear and bigotry every day in the news, specifically anything concerning The White House, Mattel has released a gender-neutral doll—and, more importantly, they’ve released said doll because studies show it will sell.
When my boyfriend and I got home, the first thing we did was unpackage our new dolls and play. 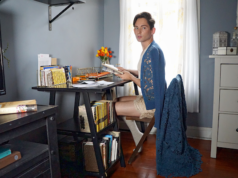