In the wake of the Pulse nightclub massacre June 12th 2016, a group of professional portrait photographers have banded together to raise money for the victims of the tragedy. These artists offer their services pro-bono to the LGBTQ community, as well as their allies, in exchange for monetary donations they will donate to OneOrlando.org and Equality Florida’s GoFundMe campaign. To make timely use of donations, the photographers will run this initiative through August 2016.

The group’s founder, Jenna Salvagin, felt inspired to pay-it-forward to her local LGBTQ community as they mourned and healed using her talent as a photographer. Reaching out to the community on Facebook, she originally offered free couples sessions and received overwhelming praise and appreciation. When she realized the demand was present, Salvagin organized a group of more than 120 professional photographers representing over 30 states and 5 countries that have joined the initiative. It was here that a donation process was implemented and Photographers for Orlando was born.

A website featuring a database of involved businesses went live Monday June 27th. Other photographers are welcome to join the movement by reaching out through our website www.photographersfororlando.org 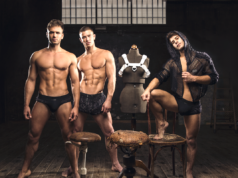 Addicted USA Gets the Party Started