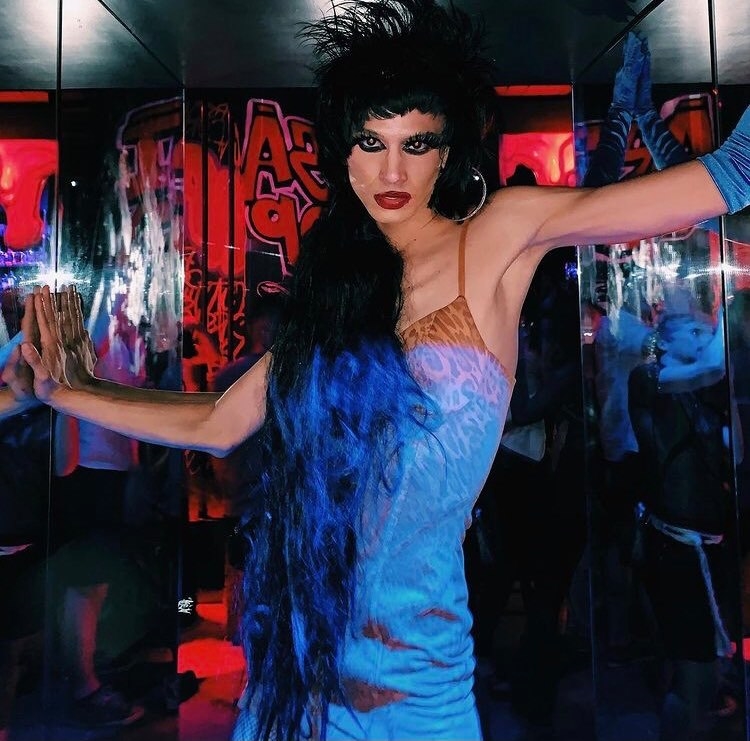 Despite coming from Texas, this slender and edgy young queen has a very impressive New York drag pedigree. And while she’s serving us fierce looks on stage and on camera, Morocco Marrakech Kennedy is also gracing our retro punk fantasies while paving the way for the new generation of drag.

Thotyssey: Hi, Morocco. I guess you’d be considered a Covid Queen, i.e. one of the new generation of queens that sprang up here in NYC during lockdown.

Morocco Kennedy: Well, I’ve been doing drag on and off in Texas since 2016. I jumped into the Brooklyn drag scene three months ago. I started with the lip sync competitions–the first at Janelle No. 5’s “Are You the Next Diva,” and then “Drag Wars” at Pieces and “Polish the Queen” at Playhouse in the city.

The scene has already changed so much here in just those three months.

I moved to NYC to pursue modeling and ended up working on drag more. Eventually I’m sure both paths will fuse together. When I first visited NYC, one of my favorite queens was West Dakota, who’s really a great example of the direction I’d love to take my drag and enter the modeling world. I’m slowly becoming known for my walk in drag; I’m always strutting and giving them drag runway wherever I’m at performing, or off-stage

And what about your stage numbers?

A lot of the numbers I do are heartbreak songs. Morocco is a romantic. She’s nostalgic, and I grew up around a lot of ‘80s pop and rock music. I love Blondie and Pat Benatar and Joan Jett, but I also do a lot of contemporary music as well.

Let’s close on your native Texas’ lunatic governor Greg Abbott, who is doing everything he can to get his state to go maskless. And now he has Covid, too! What’s up with that guy?

I’ll never understand Texas politics, but with the new census out, demographics are changing. In 10 years, things will be very different in Texas. He’s feeding into his own ideology and what he thinks will get him reelected. But yes, my friends still in Texas think he’s just a nut, too. Lord help us all. Haha!