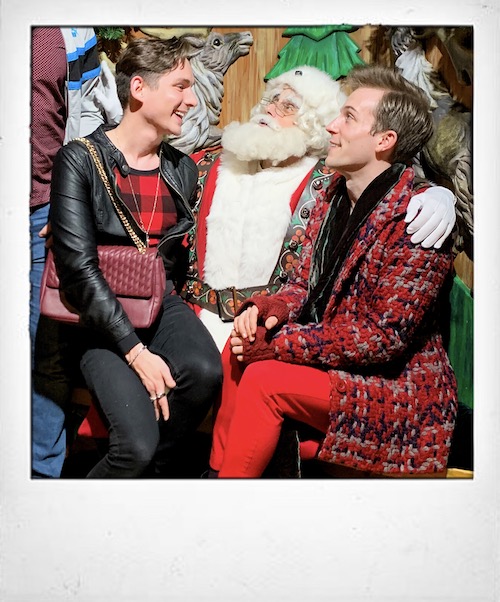 Many of us, especially those of us who moved to New York with creative aspirations, have worked some strange (to put it nicely) jobs.

I’ve been working steadily at a day job for years now, but one day I got a text message from my friend Toby. Toby is a talented playwright and has paid the bills through the years with assistant work for notable figures I’m probably not allowed to mention: but his newest gig was stepping out of the writer’s shadows and into the limelight as… a Macy’s elf.
His text wasn’t just to let me know about his new position, but to invite me to a Friends & Family preview to meet Santa. I hadn’t gone to see Santa Claus since I was seven or eight: I made my parents go to Southridge Mall, inarguably the worst mall in Iowa, because they were the only mall that made sure to only hire Santas with a real beard. (It was explained to me that Santa had to employ other “Santas” to help make sure all children could be seen before Christmas, but that the real Santa was the one at Southridge Mall. I had to see the real one to make sure my Christmas wishes weren’t misinterpreted.)

I took him up on the offer, bringing my boyfriend and our friend Derrick. Derrick a little tipsy and my boyfriend a little high, we rode the elevator to the eighth floor and stepped off into Santaland. We were greeted by a group of elves singing Christmas songs just for us—and I mean that, truly no one else was there; just a drunk chef, a high actor, a writer seeing Santa because he’s terrified of turning 30 in two months, and a plethora of elves singing at us.

We approached an Elf and asked for Toby. The elf looked fake confused, and I remembered Toby told us to ask for him by his elf name. “We’re here to see Bootsie,” I said, trying not to break. Derrick and my boyfriend chuckled behind me. They told me that Bootsie was at the front of the line, and to go on in.

There wasn’t actually a line, just several long, heavily decorated hallways. When we got to the front, there was Toby—Bootsie—and he took us into a room to meet Santa.

Derrick asked for a BB gun (“Still after that BB gun,” Santa mused), my boyfriend asked for a robe (hint hint) and I asked to be with those I love this Christmas—because everyone knows the person who asks for the least selfish thing gets the best present.

Whatever you’re asking for this Christmas, and whoever’s lap you’re sitting on when you ask for it, I hope you get it.