Actor, singer, Broadway phenomenon Marty Thomas will be unveiling his new release, “Marty Thomas: Slow Dancing With a Boy,” via Broadway Records on Friday, December 6, 2019. Recognized for Broadway performances including Xanadu, Wicked and The Secret Garden, as well as the hit television shows “Grace & Frankie” and “2 Broke Girls,” Thomas has been a popular nightlife personality for over a decade.

His new album “explores the music of the young, closeted man’s coming-of-age memories, and dares to question the possibility of having lived those memories honestly and openly,” he says. The 12-track album is a heartfelt journey celebrated by the elaborate and decadent vocal tones of an inspirational and talented artist.

I had a conversation with Thomas, and aside from finding him charming and eloquent, he was completely open and honest. 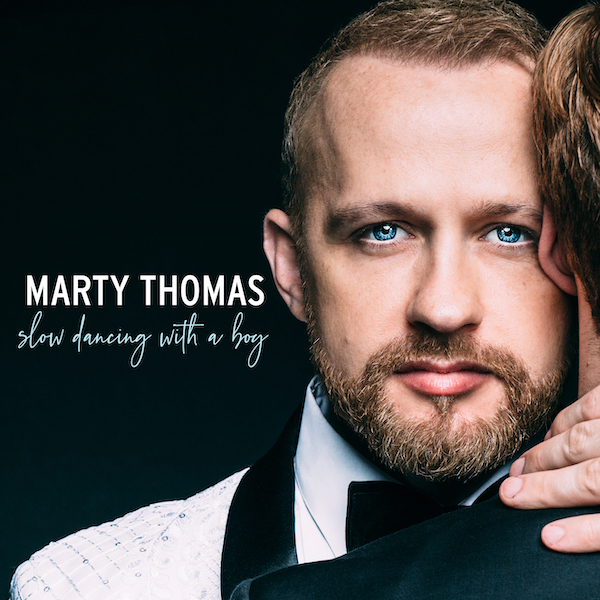 You’re about to unveil your new album, “Marty Thomas: Slow Dancing With a Boy.” What was your inspiration?
I have a new album coming out on Broadway Records that is officially out on December 6. It’s out on digital for presale on the 16th of this month. It’s my very personal project that I recorded called “Slow Dancing With a Boy.” I’ll tell you just a little bit about the project. It’s a really personal project that I’ve been working on for quite some time because of the personal nature of the content. A few years ago I came across an article that was about a boy who was going to prom. The picture was very clearly the boy going to the prom with another boy. Being raised in the Midwest in the ‘90s, I had the assumption, kind of a dark assumption, that something awful happened to him, and that’s why they wrote the article.

I opened it and was scrolling down, expecting to see the worst, and was a little bit horrified in myself to see that it was really just a slice-of-life article about the boy going to prom. It just so happened to be that his date was another boy. There were pictures of him at the top of the stairs with his date. His mom was taking a picture of them, and they were walking hand-in-hand. One of them was named Prom King, and his friends were dancing with him, not against him. It was just normal, incredibly normal. It just stopped me in my tracks. It marinated for a long time.

When I closed out of the article it really didn’t close out for me for a long time. Every once in a while a song would come on the radio or something would happen that was nostalgic from my teen years, and that article would rage in my head, the picture of those boys. It took me a while to figure out why it bothered me so much. I finally hit upon that it was anger—not at those boys, just in my situation, that I felt really robbed of that experience. Growing up very religious in the ‘90s, we didn’t have that sort of freedom and that support structure to be able to look around the room and to be able to organically choose who you wanted to go to prom with. You got to a point where your religion, and based on how you were raised… I didn’t feel like I was worthy of that experience. I deserved that experience that my straight friends and my siblings got, and I resolved myself to having to live a lie, having to manipulate the scenario and having to manipulate the situation, to hide.

This project was sort of my feeling, concept, [that] once I started to figure out why I was so angry about that article, and why I was so angry about the situation of feeling robbed, I started to take a look at that music. The songs were coming back to me and sort of haunting me. I was thinking back to how beautiful that right of passage experience that kids are supposed to get to have. But the story rarely gets told that so many kids don’t get to have that experience, because they are not what’s on display by Hallmark. That’s what you get for those teen years, those coming-of-age experiences, unless you were different.

Marty, where are you from?
I’m originally from Trenton, Missouri, right up in the northwestern quarter by Iowa and Kansas.

It had to be different for you growing up there. In New York, I think it might have been easier.
Very different. I was even lucky, because I was a child actor. My parents were farmers, and I got off the farm to perform and travel a lot. I went to school in New York for middle school, but even in New York there were kids who were closeted in middle school and high school out of necessity. Maybe because it was just a different time, but in the ‘90s it was just not all right to be a performer and be gay. You aren’t going to rise above as acceptable for a performer to be trans or gay or different in any way. So even as a performer in New York, you were faced with a constant reminder to butch it up, be less gay, less unique, fit the molds.

That had to be annoying.
But also I take a look at how I felt about it, between my generational gap and between the kids today that have such an easier time. It’s still not easy, but it’s so much easier. I think about my generation and the generation before me, and I look at my coming-of-age experience, and the things that people went through pre-Stonewall were unimaginable. At the time it was a struggle, and that’s what people in the gay community had to do.

Right.
But with this project it’s sort of like looking at the experience—we had to do what we told ourselves we had to do and try to take some of that music back from a dark experience to try to place it in the light. I took a lot of the songs from my middle school and high school years, and songs that really meant something to me and would have been a beautiful experiences to slow dance to with a boy at my prom, and rearranged them and gave them new life. I rearranged them to how I would want to hear them and put them a little closer to the light. It was a very cathartic project.

If it helped you and it helps others, that’s awesome. The album itself was great musically.
Thank you so much for listening.

It became addicting after hearing the first song. Along with your story, it should be a very successful record for you.
Thank you.

You have done lots of acting on Broadway and television, and all over the place.
I have. Right now I’m really solely focused on the album. I’m doing a concert on December 14 in the city, downtown at a place called Subculture. My album release party in New York is January 5 at the Greenroom 42 at 8 p.m.

That’s a great venue.
I love that venue. I love the sound, and I love the vibe of it. For me it’s perfect. So I am contouring a unique party based on the album. I’m touring a prom.

That’s genius. I love that idea.
I hired a prom photographer, we’re building a TV prom backdrop and I hired a party band that will transition into music after the concert. We will just have a little dance. People can dress up any way that they would like to, to go to prom now. They can go vintage or retro, or if they just want to get dolled up or glammed up to get their 2020 prom photo. I hope maybe you’ll come and dance with us.