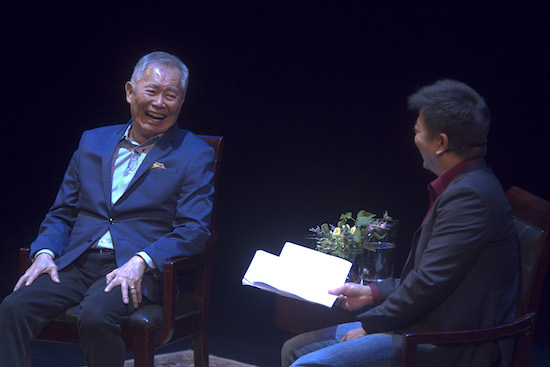 George Takei for President was my immediate thought as I focused upon the actor’s ability to collide with injustice, and attack political demons, with his light hearted, sarcastic raillery. At the same time he ingeniously read those suffering with the disease of homophobia, and then admonished them even before they knew they had been berated. George Takei is “A gift to mankind ”

The “Tsunami” of social media shared tales of his family’s mandatory and involuntary internment of Japanese-Americans during World War II, a shocking portion of our history often forgotten or unspoken of. He referred to his father’s frustration, and his memories of a five year old boy, himself, living behind barbed wire in some godforsaken area, somewhere in the United States. He then led his fans through the celebration of his rise to fame, via the science fiction hit series, Star Trek, a project way ahead of it’s time, which still lives on today. Lastly, the social justice activist spoke compassionately and whimsically about his fight for the LGBTQ community, their rights, their struggle for marriage and equality. At one point he joked about loving straight couples because they were the key to making all those gay babies.

His empowering journey was unleashed and conveyed with the help of Jay Kuo, the brilliant and well spoken head of “Team Takei”, his advisor since the inception of Takei’s viral social media explosion. Kuo is also the composer and lyricist of the Broadway musical, “Allegiance”, the production that Takei considers to be his Legacy. Kuo guided the conversation through questions, answers and scenarios, with the two situated on stage, yet making the atmosphere comfortable enough so the congregation felt as though they were in the duo’s living room.

Although having been part of the human race for 80 years, there was not a trace of age in the actor’s voice or presence. In fact he possessed the very essence of youth in his attitude, and his aura. I spoke with Lieutenant Sulu, at a Star Trek convention many years ago, and found him to be exactly the same, except twice as outspoken, in the best way possible.

The answers of all the major questions that I fantasized about asking Mr. Takei myself were honestly and openly revealed during his showcase. For example I wanted to know why in the original Star Trek series, the master, Gene Roddenberry seemed to cover all of the human barriers such as race, interracial romance, social differences, etc., except homosexuality. To that he responded:
“Certainly with a TV series back in the 60’s you couldn’t be known as gay. Advertisers would shun the series. Gene Roddenberry knew that and he created all the original characters as straight people”.

He also spoke about the last Star Trek movie and the fact that Sulu was written as a gay character. He explained how he felt that the movie should be an honor to Roddenberry and the fact that the original Lieutenant Sulu was created as straight, and that he believed he should remain straight.

Each of the topics he emphasized, such as not being able to admit to being gay while aspiring to be an actor back in the 60’s, his first experience on the Howard Stern show, how he continues to conquer political injustices, Trump, and so forth, were executed in the most eloquent and humorous fashion. When reviewing a rock concert there is usually at least one song that I’m not inspired to dance to. Not so in Mr. Takei’s performance. I clung to every word, every episode, every bit of laughter with the anticipation of the next.