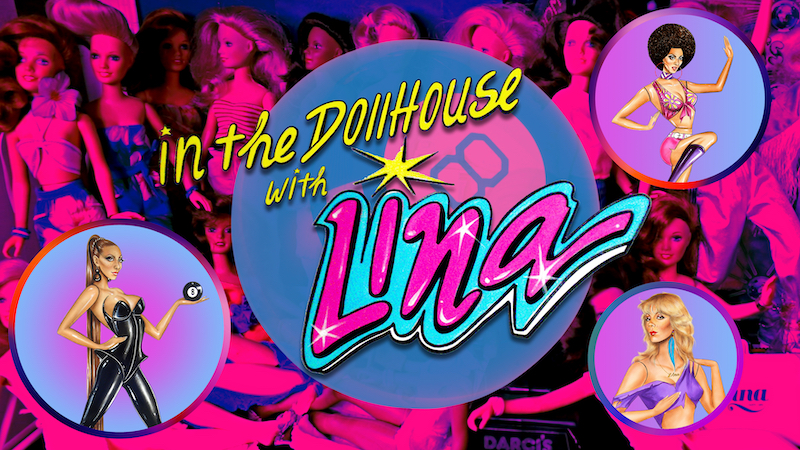 Returns for Third Season
Lina Bradford is Back with Balliquia,
her transformed Magic 8 Ball
>By David Luhrs

In the Dollhouse with Lina, the rollicking talk show hosted by the spirited house music DJ diva Lina Bradford, returns for its third season. In the show, Lina’s quick wit and infectious smile take center stage as she discusses pop culture with her celebrity friends. In the first two seasons, her Magic 8 Ball transported Whoopi Goldberg, Carson Kressley, Candis Cayne, Dominique Jackson and more into the dollhouse. Season Three, airing exclusively on Instagram, will introduce a transformed Magic 8 Ball, now called Balliquia (Lina’s cohost and cohort in crime), and welcome a pair of fashion maven guests from RuPaul’s Drag Race, America’s Next Top Model and legends of nightlife to each episode.

“In season one, I was figuring it out,” reflects Lina Bradford from the Dollhouse studios. “Season Two was way more me. And this season is all the way Lina amplified like the true essence of all that is Linish.”

In season three, Lina doubles the fun with two guests on each show, one virtual and one in-studio. As always, Lina presents a side of her guests that fans don’t normally see. “I love showcasing my guests’ love and light,” she explains, adding that fans will be especially surprised by her interview with Amanda Lepore. “Everyone knows her for the visual goddess that she is, but I’m really excited for people to hear how fun and hilarious Amanda truly is.”

Lina grew up as an only child in New York City, across the street from Carnegie Hall. Without siblings, she would spend most of her days alone with only her wild imagination to keep her company. “I would put my Barbies in the craziest scenarios,” she remembers. “Whether they were fighting crime, sailing the French Riviera, or running high-powered executive meetings in the boardroom, they always did it with glamour and style.”

She is a trans woman, but does not define herself by it. Lina proudly proclaims that she has never done labels. She’s only worn them.

In the Dollhouse with Lina is available on IGTV @inthedollhousewithlina.