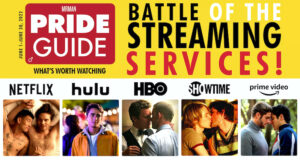 In their “Pride Guide“, Mr. Man pits Netflix, Prime, Hulu, HBO and Showtime up against one another to determine which is the gayest streaming service worth watching this Pride month.   To find their winner, the editorial team at Mr. Man combed through thousands of hours of content and tallied the number of intimate gay scenes on each platform!  They then broke results down into four categories: the network and series with the Most Gay Scenes, those with the Most Nude Scenes, and those with the Most Full Frontal and the Most Butt Scenes.

The winner of of the Most Gay Scenes is… drum roll… Netflix, of course!  It comes as little surprise as Netflix is the network behind such LGBTQ hits as Grace and Frankie, Orange Is the New Black, Queer Eye, and its latest phenomenon Heartstopper, starring cutie Kit Connor.  But it is the network’s other Kit, Kit Williamson, who stars in its gayest title.  With 28 steamy gay scenes in it, Eastsiders, the popular series about a tangled web of gay relationships, has the distinction of being the gayest title on the gayest streaming network. 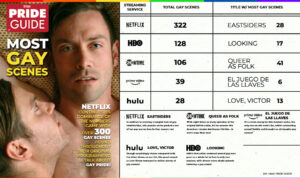 In the Most Nude Scenes category, Netflix once again dominates with over 700 male nude scenes!  El Marginal, the Argentinian cops-and-criminals show tops all other series with 28 scenes, ten of which are full frontal.  Elite, its teen series features the most rear scenes with 26 bare bottoms!

HBO once again comes in second with Oz, the series about inmates and correctional officers battling for power and survival, scoring the most naked scenes on the network.  Mr. Man counts 72 nude scenes in Oz, with 43 being full frontal!  In fact, the one category HBO leads in “Mr. Man’s Battle of the Streaming Services” is in Most Full Frontal Scenes, and it is in large part thanks to Oz. 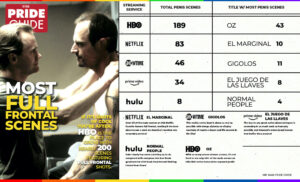 Showtime, the network that introduced Queer as Folk to the world, ranks as the #3 streaming service in all categories in the battle.  It’s show, Shameless, features male nudity in nearly every one of its 134 episodes and Gigolo, it’s reality series about real life escorts in Sin City, is second only to Oz for its number of full-frontal scenes.

Prime Video and Hulu consistently rank at the bottom of “Mr. Man’s Battle of the Streaming Services” Pride Guide but special recognition goes to Prime Video’s El Juego de las Llaves, the only series to be named in all four categories, and to Hulu, for scoring big in gay hearts with its two endearing series, Love Victor and Normal People.

All scenes featured in Mr. Man’s “Battle of the Streaming Services” Pride Guide are viewable in their entirety with free signup.