Former lead vocalist of the boy-band No Authority, who has toured with 98 Degrees, Destiny’s Child, Aaron Carter and more, as well as working with Rodney Jerkins (Whitney Houston, Jennifer Lopez, Britney Spears) and signed to both Michael Jackson and Madonna’s record label, Ricky Rebel is all grown up, with a solo career that is blowing up! Now an out and proud LGBTQ performer who is crossing the all boundaries in music and fashion to overwhelming applause worldwide, Ricky Rebel has played with Grammy-Winners Mya, Switchfoot, Toby Keith, Patti LaBelle, Colbie Caillat, The Psychedelic Furs, Kesha as well as selected tour dates with O-Town and Blood On The Dance Floor. His highly anticipated new album is set to be released, and I spoke with him to get all the details: 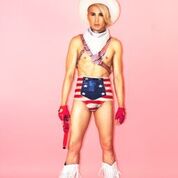 When is your new release set to be launched?

What’s the name of it, and does it have a theme?

What was the inspiration behind it?

I wrote it because I felt like certain parts of society needed to toughen up and stop playing the victim role. I feel like there is a war against masculinity. I wanted to confront that and inspire people to balance their own inner masculine and feminine selves. Masculinity is not poison.

I am performing Oct 27th at the 12th annual Halloweenie with world renowned DJ Hector Fonseca and Alyssa Edwards from Drag Race fame. Nov.18th I will be performing live at the American Influencer Awards and I am also planning to Tour the UK in December.

Do you have a new single/ video to accompany the new album?

Yes. I have this video that I made for one of the tracks called “Time.” It’s about the fleetingness of time and how important is to appreciate the beauty of life and the people that you love that are in your world. It can all change in an instant.

I know you are having a kind of charity event launch party, what’s that about?

On Nov.5th I will be performing at The Mint in Los Angeles for my CD release party. We will be raising money for Teen Cancer America. I met Teen Cancer of America at Politicon and we instantly took a liking to each other. I am grateful for the opportunity to raise money for such a great cause.

You’re a blonde now, did the lack of color go with the theme of the album?

I didn’t feel like blue was my thing anymore. It wore out it’s welcome with me. I had it for 7 years and wanted a fresh new look for my album. I have no regrets.

What’s next for Ricky Rebel?

Ricky Rebel is excited to give birth to this record and the music video for “Time.” I hope my fans love it. I certainly loved making it. I made the record to wake people up from the trance that some of us are living in. I want people to stop living on their phones like Sheep following what their friends think and what the mainstream media thinks. I want people to have a mind of their own. I want to create an army of a million new type of Alpha’s. Alpha’s that are strong, bold, and born leaders who also possess a beautiful feminine type of maternal sensitivity and vulnerability.

The official website for Ricky Rebel may be found at www.RickyRebelRocks.com