Watchmen star Yahya Abdul-Mateen II is one of the most well-endowed men in Hollywood, according to a list of Growers and Showers compiled by Mr. Man, a database for male celebrity nude scenes. 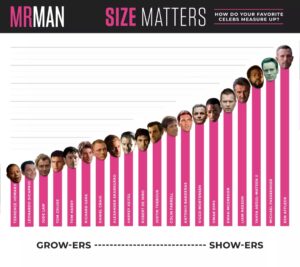 “During this award season, we thought it would be fun to recognize the actors who dare to bare all,” says Phil Henricks, an executive at Mr. Man.  “We didn’t feel the need to hand out trophies as these men have already been gifted with the best prizes of all.”

On the PEOPLE Every Day podcast, Mr. Abdul-Mateen II explained how he first watched his nude Watchmen scene sitting next to his mother.  “We were at the premiere and my mama was sitting right next to me,” he said. “I never tipped nobody off about it. I just sat there right next to my mama, and you know what? Surprisingly, she didn’t react. And I don’t know if she reacted on the inside or what she was trying to hold, but I got zero feedback from my family. I think I did give them a heads-up about the straight up naked, naked, naked, naked. But they was cool with it, I think.”

The experts at Mr. Man were satisfied as well. After viewing 8,000 full frontal scenes, they chose him among their 10 “Showers” in Tinseltown.  Viggo Mortensen, Ben Affleck, Colin Farrell, and Ewan McGregor also make the well-hung club.

Michael Fassbender, best known for his starring role in the X-Men films, appears on the list for his full-frontal scene in the 2011 film, Shame.  “The German race car driver turned actor is probably not as well known in America as the other men on our list,” reflects Henricks. “But judging from the impression that he made on our team, he should be.”

Among the Growers list are Tom Cruise who appeared nude in 1983’s All the Right Moves, Jude Law from 1999’s The Talented Mr. Ripley, Leonardo DiCaprio in 1995’s Total Eclipse and Tom Hardy who bared all in 2008’s Bronson.  “We applaud the Growers, too,” says Henricks.  “At Mr. Man, we appreciate all shapes and sizes.”

Mr. Man is an adult entertainment website and database of male nude and sexually explicit scenes from mainstream movies and TV.  It launched in 2013, 14 years after its parent site, Mr. Skin.  Its collection includes more than 8,000 stars, 90,000 photos and video clips and a vast selection of curated films and TV shows in full HD video.