The ladies of Peacock’s Emmy-nominated and critically acclaimed comedy, Girls5eva, are in #AlbumMode.  Peacock has released the season 2 soundtrack along with a special ‘B.P.E.’ remix via Epic as part of PRIDE month. Influenced by Kylie Minogue’s #1 worldwide dance/pop classic ‘Can’t Get You Outta My Head’, the extended club remix of ‘B.P.E.’ is produced by Eric Kupper and executive produced by Brad Mason LeBeau. 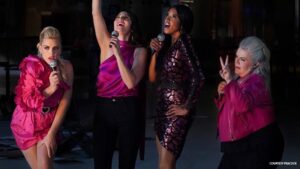 For those visiting Los Angeles month, the GRAMMY Museum® is hosting a special retrospective exhibit celebrating Girls5Eva from June 9 – 27.  It features artifacts from the two eras of Girls5eva including wardrobe and memorabilia. There is also be an interactive sound booth where museum visitors can make a socially sharable video inspired by Girls5eva’s iconic pop hit, ‘Famous5eva.’

Listen to the album and remix here.