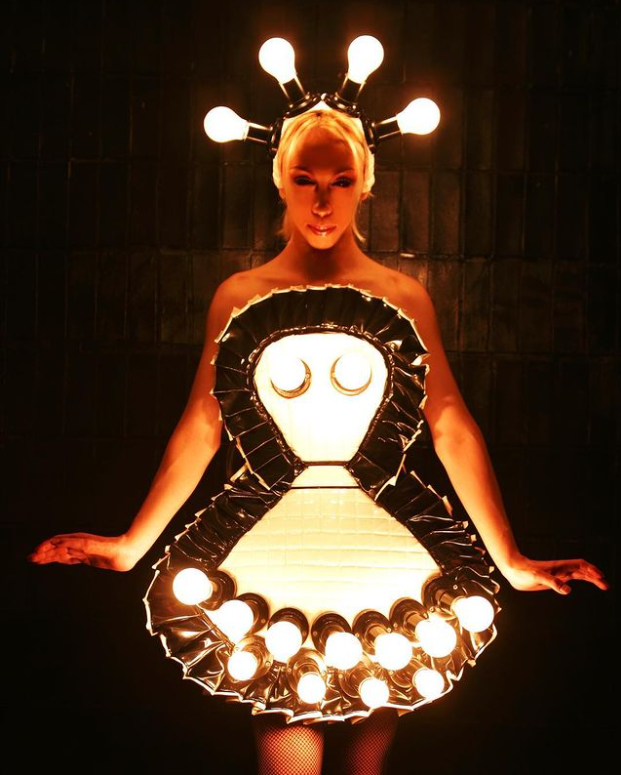 Hello, Gioconda! If you will, tell us a bit about what your life in Russia was like as a queer, creative kid.
I grew up not in Moscow, but in Siberia (Ulan-Ude, republic of Buryatia), by Lake Baikal. I certainly tried to discover many sides of my creativity by participating in theater activities, painting and crafting, which you can see in my drag today.

How did you begin as a costume maker?
In my childhood, I was making dresses for my girlfriends’ Barbies by hand. Later on, when I moved to Moscow and didn’t have extra money for extravagant outfits, I [had to] learn how to make things myself.

What brought you here to New York?
One time leaving the club [in Russia], I was approached by a car. Two strangers were inside–they said they recognized me, and they were harassing me with questions. I was trying to get away from them, and then the driver said he didn’t like people like me, so he pulled a gun on me and shot at me several times. Thank God it was a BB gun and I wasn’t killed. It gave me a strong understanding that it’s not safe to live in Moscow anymore. I moved here in 2015. The energy of New York is very similar to Moscow, so I felt that this similarity will help me to feel like I’m home.

Over the years, I’ve seen you sport costumes that lit up and that featured all sorts of reveals. Once, I even saw you wear an elaborate look that housed a tank full of live fish!
What’s been your favorite costume that you’ve made?
My favorite one is the one that looks like a dress made out of light bulbs. It’s one of my earliest creations that brought me success back home. That outfit symbolizes many ideas that I have.

Is a language barrier a difficult obstacle to overcome in this business?
Backstage at Lucky Cheng’s, the girls are always having a good time. There are many laughs and jokes after the show, and they are so much like family to me that sometimes I forget and start speaking Russian with them. But onstage, poor knowledge of the language does not bother me at all, since my content is international and understandable to all people inhabiting New York.
Lastly…you made memorable pieces for Miz Cracker’s Drag Race costumes, including that gold skull figurehead and that menorah headpiece. Do you often design for other performers?
Not really. I don’t have enough time for it, with all the things I currently do, like being at Lucky Cheng’s every weekend or creating elaborate content for TikTok. Whatever time I have left is extremely valuable. Meaning: If any performer is ready to spend big money, I can look twice at my schedule, *wink, wink*.