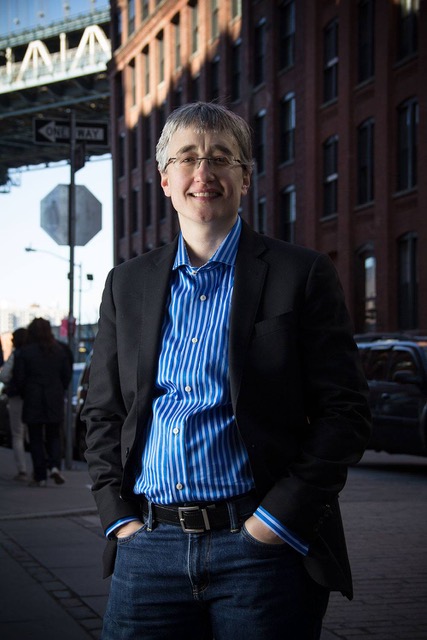 In 1973, when I was six, most states had sodomy laws, homosexuality was considered a mental illness and it was not uncommon for youth who came out to be institutionalized. In October 1973, Dr. Howard Brown, Martin Duberman, Barbara Gittings, Ron Gold, Frank Kameny, Nathalie Rockhill, and Bruce Voeller founded the National Gay Task Force, today known as the National LGBTQ Task Force. Over the next four decades, the Task Force would play an instrumental role in establishing a new narrative in the fight for equality.

Back then, I had no concept of the struggles and barriers that the community I would one day become part of had to face. Over the years, I would come to understand the fight for equality and develop a great appreciation for the individuals and organizations that have fought so hard for what we have today. So it was a great pleasure to ask Cathy Renna, National LGBTQ Task Force Communications Director, some questions about her long-time involvement in the fight for LGBTQ+ equality and the Task Force.

Having both come out in the early/mid-1980s, we share that time as a reference point for what it was like for our community. On coming out, Cathy said she was “very blessed to have an incredibly supportive family and circle of friends and community in New York and Italy.”

Cathy shared the fact that for someone who was a pretty shy teenager, she feels it’s a miracle to have evolved into someone working in media and the public eye. The willingness to be visible and fight shows fearlessness; however, she knows the value of time spent on self-care and growth, and her work is driven by passion and hope, not anger. Cathy’s work can be described in many ways, but it is primarily education and activism, and her goal is to create change, make our community less abstract to the larger culture, and change hearts and minds–for all of us.

Cathy has been at the forefront of some of our community’s greatest wins regarding equality, including marriage equality, the repeal of DADT, and educating the public about our diverse community through the media and storytelling,

“This is not a ‘job’ for me, but a vocation, and I cherish the fact that I have had the chance to be part of history and change. I am most proud of seeing the end result.”

In the early 1980s, as was true of the decades preceding it, activism often took the form of a protest or march. While those methods remain the same, the advent of social media and our ability to instantly connect has changed the way we interact, communicate, and organize. Cathy’s work and dedication to the community certainly make her a role model. When I asked her if there was anyone she viewed as a role model, some of her choices included pioneers like Barbara Gittings and Frank Kameny, Barbara Smith, and Monica Roberts. There also were more radical activists in groups like Queer Nation and ACT-UP. Like our own community, her role models are incredibly diverse.

“Some folks have been critical to my learning how to navigate the media and political landscapes–individuals who were thrust into the public eye for many reasons. These include Judy and Dennis Shepard, the parents of Matthew Shepard, and the young trans and non-binary activists I work with today who are standing up for themselves and our community.”

In the 1990s, Cathy worked for the watchdog group GLAAD. That’s where she grew up as an activist. Her mission has remained the same: fair, accurate, inclusive media representation of the diverse LGBTQ+ community. Her local and national media work and acting as a spokesperson who regularly speaks on LGBTQ issues have prepared her for where she is now.

The Task Force–an organization Cathy’s worked with for years–has a commitment to diversity, progressive and intersectional work, and a radical accessibility that aligns with Cathy’s values. “It is a political and personal home for me.”

As Communications Director for the Task Force, she oversees the internal and external communications and works to make visible the extraordinary activism of the staff and programs. From policy and field work to their Creating Change conference, she amplifies the voices of their leadership, in particular the executive director, Kierra Johnson.

“The National LGBTQ Task Force advances full freedom, justice, and equality for LGBTQ people by building a future where everyone can be free to be their entire selves in every aspect of their lives. Today, despite all the progress we’ve made to end discrimination, millions of LGBTQ people face barriers in every aspect of their lives: in housing, employment, health care, retirement, and basic human rights.”

The National LGBTQ Task Force is the country’s oldest national LGBTQ advocacy group. To learn more about the Task Force, what they do, and how you can get involved, visit their website and follow them on social media.