Born in Jamaica, Jones moved to New York at a young age where he began modeling for Wilhelmina Models, which eventually led him to Paris, where he worked with Elite Models for the next six years. He recorded his first single in Israel and was signed to Sony Records in London. He received media promotion and performed in clubs in the New York nightlife scene. A world traveler now living in Europe, but frequently winding up in New York, Jones has proven himself a special force to be reckoned with.

Super sincere, honest and humble, Jones is also the face and ambassador for the Winners Foundation, an organization supporting children and adults with handicaps in Belgrade, Serbia. He and his family have also been performing benefits and donating to amFAR, The Foundation for AIDS Research, for years as well.

Jones’ single “Strong” is mixed by Eric Kupper with promotions by Brad Lebeau (promolift.com). The song will also be part of a Trax Records compilation album to be released in August in celebration of the label’s 35th anniversary.

I spoke to Jones, coming off of supporting his sister at Pride Island for WorldPride, which is always a joy as he happens to be one of the sweetest men on the planet.

Chris, I’ve never seen your sister in concert, and I’ve got to say it’s one of the best performances I’ve ever experienced.
OMG, I’m glad to hear that. She would love to hear that. It’s too bad that she had a broken toe, and she was really in pain. But anyway, I just finished some backing vocals on her new album, [recorded] at Alligator Head. Alligator Head is owned by Francesca von Habsburg, whose husband was the prime minister or the head of Vienna. We recorded in Jamaica with Ivor Quest, who produced “Hurricane,” and he’s a genius. From him I met Princess Diana’s brother Charles. I did a lot of backing vocals with Grace, but, you know, we used to sing together in church, so we worked it!

Do you know with the weather in Jamaica, we didn’t want to work. We had to! Then we flew into WorldPride.

Dyou have fun?
Yes. I was working the costumes.

I have never seen any performer change costumes for each and every song like Grace did.
Well, you have to remember, she’s a fashionista. My mother taught us how to sew when we were children, because my mother was a designer. She was a wedding designer. In our basement we had seven or eight sewing machines. I would come home from work and make a pair of pants and wear them out the same night. 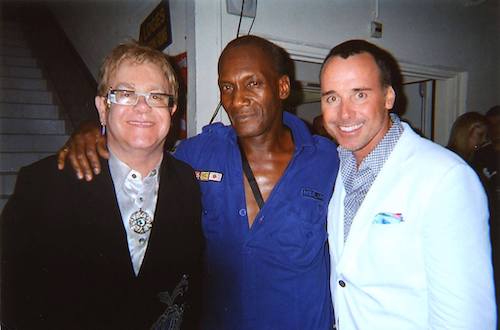 So, you’re almost a royal, you have an album out and you’re a fashion designer.
I was the first black guy to work with Elizabeth Arden in the 80s. I was a hair cutter. So that was very interesting.

Let’s talk about your new album.
It’s really interesting, my album, because there is one particular song that is 30 years old that I produced with Mark Kamins called “I Wonder Why.” This track was under my bed for the last 30 years. It actually inspired me to really go out and start finishing my work. I had this track that was done so many years ago and never released, and unfortunately Mark is dead, and I thought that I would do this track as a tribute to him. We did that one in New York, and that is one of my favorites. It’s about wondering why things happen, and that we always have to get down to get up. It’s about the balance of life. I wrote “Strong” because of the music industry. “Strong” is about young artists who are struggling to make it, and they don’t really realize how difficult it is. You have this dream, and you just have to keep going. The strength that you have to have and the drive—it’s so important.

That’s a great theme.
The thing about it is, this industry is not as easy as people think. Some people look at me as if they are jealous; however, it took years. I am not an overnight success. Even if you have siblings who are famous, I think it’s even harder to become successful.

I agree with you. It had to be tough for you especially.
I think you need a lot of determination. I think that a man is intimidated by an aggressive woman. I think that Grace has that side, my father’s side.

Actually, I think all Jamaican women are dominant. Most women, like you and Rachel (Screamin’ Rachael from Trax Records), I mean, in a man’s world it’s really difficult unless you really have the know-how to intimidate them. One thing I admire about you both is your determination. You and Rachael never give up. I realize, like you, Rachael is a businesswoman, and she’s focused. She sees exactly where you are going, and I think this is a power in itself. To survive, especially in the business, you have to get respect. It’s not even about fame; it’s about respect.

Respect, that’s true.
People say to me, “You’re famous.” I’m not famous; I’m just like everybody else. I have to eat, shit and die. So it’s all the bullshit that goes with it and the people that mislead you. Some people get stoned one night and promise you the world, and the next day they forget, and you can’t even reach them.

For years I was misled. I was a model and DJ in Paris for many years, and I worked with Elite. I was one of the first male models to start with them. Paris gave me my fashion image and my image of music and a certain culture. That’s why I live in Europe. I love New York as well. It took me nine years to put this album together, and it went through many changes. I went to Holland and Serbia for the saxophonist, and it’s a multicultural album with musicians from all over the world. I did it naturally. I have a musical background, which is classical. I played piano and keyboard, and I just don’t believe in music that is done on computer. I used to play the organ in my dad’s church. Because I have a musical background, I just don’t get on and do beats. I don’t really like it. I put together all my arrangements with Martin Ryan, and I put together all the harmonies. I used to direct the choir at age 11 in my dad’s church. My mother was also a musician as well.

So you are an entire musical family.
Yeah. My mother especially. I have a lot of support from people like Terry Topcat and Allison Russell. I have an amazing team, including my road manager and friend Vahe Sinsinian, and he speaks six languages as well. So now I’m going to tell you an amazing story about Racheal from Trax Records. I came to New York, and I did not have a record deal.

After the album was finished, with my backing vocal singers Ebby and Anita, who are very important to me, I came to New York to launch the record, and I did not have a record label. So Racheal called me. We were just going to put it up on iTunes and forget about a label. Then Racheal called me and asked me if I wanted to be on her label. I hadn’t seen Racheal in years. We used to perform together in the 80s. I didn’t know that she owned one of the most prestigious labels in the world.

Everyone now thinks I am very lucky to be on that label. At first I backed off, because everybody promises the same things. But I knew Racheal for a long time, and something told me to do it as I know she has a good heart. I didn’t think she would steer me wrong. She insisted that she wanted my music, and finally I agreed. In three weeks I had the contract and the publishing. Everything was done while I was in New York. How lucky is that!? The record is now listed, and it’s getting a lot of coverage in Europe.

ON POINT WITH: YVIE ODDLY