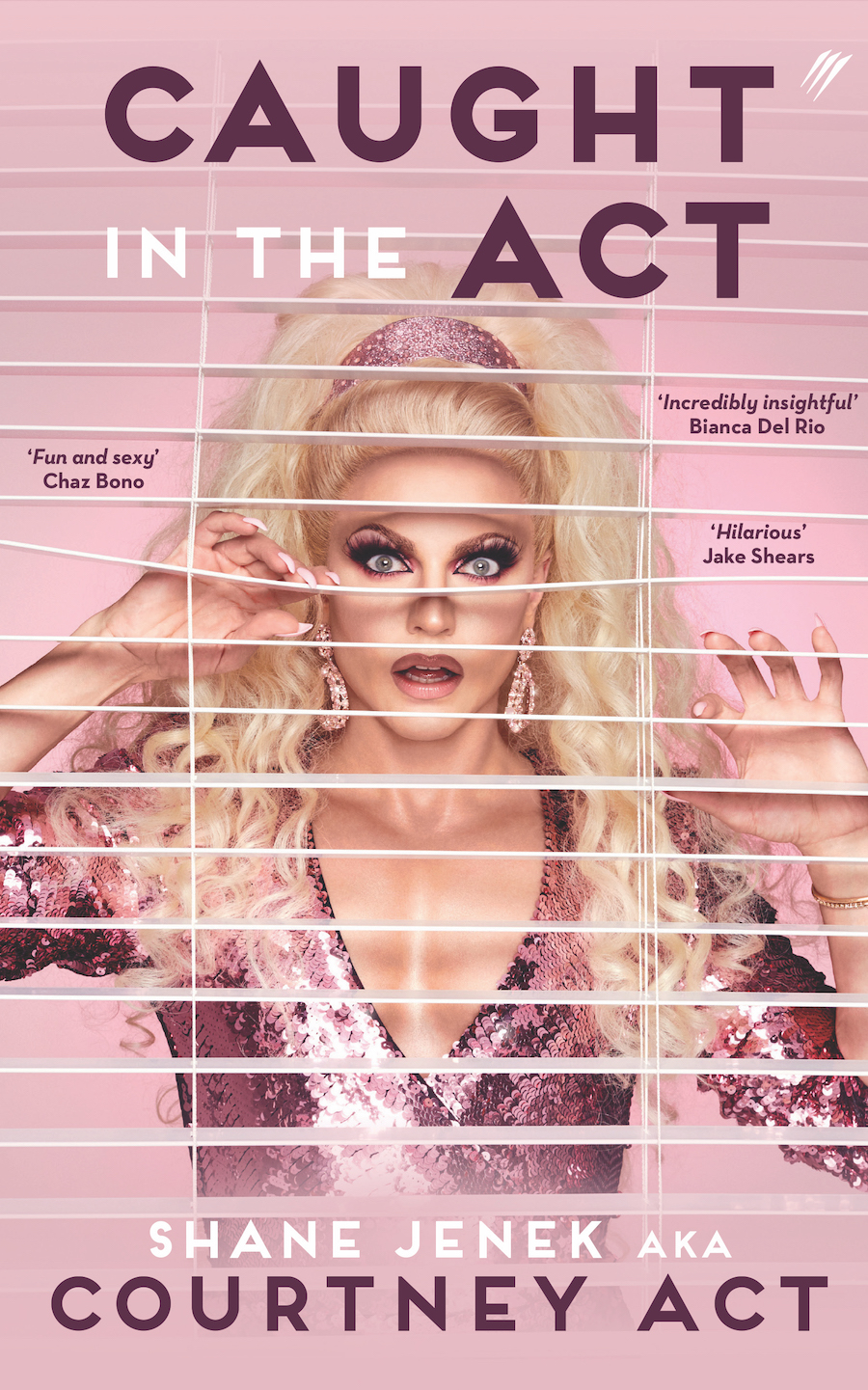 Behind Courtney Act’s rise to global fame is a story of searching for and finding oneself. The Drag Race season six star’s new memoir, Caught in the Act, is a hilarious, often scandalous and at times heartbreaking peek into her experiences in developing a greater understanding of gender, sexuality and identity.

Courtney (male name: Shane Jenek) writes about growing up in the ‘80s and ‘90s and how her adolescent angst was pitted against the love of her traditionally wholesome parents. She shares tales of the thrill in discovering drag and digs into the seedier side of her adventures, including dabbling in meth and engaging in multiple sexual encounters with a broad spectrum of sexualities and genders.

There’s lots of Drag Race tea spilled, too; like her shaky introduction to Adore Delano and oh, the time RuPaul blocked her on Twitter. We caught up with Courtney from her home in Sydney, Australia.

It is often said that writing a memoir is therapy for the author. How true is that?

Courtney Act: Oh, yes, writing Caught in the Act was the deepest childhood regression therapy ever! For over a year, I sat immersed in remembering and writing about the most informative events of my life. It was incredibly cathartic. Reflecting on old memories helped to bring a better understanding of many of the incidents, but with an adult perspective.

Like when you recount the handsome, blonde high school senior boy that stopped the kids from bullying you?

I didn’t realize the impact that moment had on my life until writing the book! His standing up for me in my time of need was often a memory that circled around in my brain, but only popped up every once in a while. I’m surprised he made it into the book, honestly, but it proves how impactful that young boy’s act of kindness was to me.

What did you learn about yourself from writing Caught in the Act?

When I was younger, I was intoxicated by the idea of fame and notoriety. It filled a void for my insecurity and shame and my unexamined feelings of gender, sexuality and identity. As I have matured, I have turned more outward and have begun to focus on how I can be of service to the world and improve the lives of others. I want to be that handsome, blonde high school senior that stood up for young me. I have come to learn that empathy does not come from understanding someone else’s story and experience. It comes from not being able to understand, but still believing what someone tells you. Real allyship is caring for people outside of your bubble.

It’s incredible that a young kid was able to make such an impact on someone’s life.

And that he understood something that it took me 30 years to learn.

Some never will, sadly. I had a similar journey with understanding my own gender, sexuality and identity. Initially, the labels I adopted helped me to find a place that felt most right for me. However, those labels began to feel limiting. I came to understand that labels can’t describe every human experience. Whichever way my gender, sexuality and identity express themselves at a particular time is me at that moment, and it’s correct.

Has being a celebrity helped or made the process more difficult?

Being in the public eye is not something I would wish on anyone, unless they have a dream of being something bigger than themselves. Like, as Courtney Act, I want a band and sequined costumes and dancers…and all that costs a lot of money! You need a big auditorium filled with people to pay for that shit. So, the loss of anonymity is worth it for me. But whenever I see someone going on one of the reality shows with no purpose except to be famous, I always want to tell them, ‘Don’t do it! It’s not worth it!’ There are better ways than fame to find happiness and contentment. Invest in friends and family and find real purpose.

What have you gained from reality TV fame?

I have a lot to be thankful for. My friendships with Bianca, Adore and Darienne on Drag Race. I love them. Also, winning Celebrity Big Brother was so epic and life changing.

The Drag Race phenomenon has really exploded over the years. Has it gotten to be too much?

The Drag Race universe has expanded beyond anyone’s wildest expectations. It can be hard to keep up with these days! But truthfully, I hope it gets even bigger. I still love watching the shows, though I tend to focus on the OG series, All Stars and of course Down Under.

What are you most nervous about people discovering in Caught in the Act?

I don’t know if I am nervous, but I’m interested to see what the fans do with all the behind the scenes Drag Race stories.

Has RuPaul unblocked you yet?

Is it true that you battled your own identity crisis?

At one time, I was actually quite competitive with Courtney Act. The struggle to understand who I am beyond the status quo has been one of the greatest gifts of my life.

What do you hope fans take away from reading your book?

I hope they feel inspired to radically express themselves.

Do you have advice for anyone considering a career in drag?

Do drag because you have a passion for it, because it’s art and because you crave a new creative expression.   And have fun with it.

What is the worst part of doing drag?

The physical pain of it all. As I grow older, I’m working hard to mitigate the corsetry and prolonged heel wearing.

What is the best part of drag?

Taking drag off is one of the best parts of getting into drag. But that’s not a real answer. The real answer would be having a platform to change people’s minds.

What is your favorite song to perform drag to?

“I Touch Myself” by the Divinyls.

Which celebrity would you most like to slide into your DMs?

Caught in the Act: A Memoir by Shane Jenek, aka Courtney Act, is available now, wherever books are sold, through Pantera Press.