One of the most enchanting and sought-out Queens in New York City and Fire Island, Brenda Dharling is one of  the busiest girls around. I’ve had the pleasure of speaking with her several times. I also know her on a personal level and find her to be always extremely friendly, very candid and an amazing artist as well.

Since we last spoke, what have you been doing?
Draggin’ all day. Now that it’s summertime, I spend my weeks in the city. From Tuesday to Friday I perform in the city, and Saturday and Sunday I perform on Fire Island. I’m out there every single weekend. Monday is my one day off until September.

Where can we find you in the city?
In the city, every Tuesday I’m at Boots & Saddle, and every  other Wednesday I’m at The Monster with Holly Dae. Thursday I do Queen at Industry, and Fridays I do two shows: I do Distorted Diznee at the Laurie Beechman, and then I do Blackout Friday at Suite Bar.

And on Fire Island?
This is my second year doing the Saturday Pool Show with Logan Hardcore at the Ice Palace. We do an opening number together, we do a  couple of solos, we really just kind of talk to each other, and everyone just watches us. We interact and just have a good time. Then we jump in the pool. People really gag, because we have a full face of makeup on, big hair, but when you’re wearing all of that, the first thing you wanna do is jump in the pool. Last year we had water guns and floaties. This year we have water guns and floaties. But I have the most fun on Saturdays. Then on Sunday sometimes I help with Ariel’s show, which is basically the same thing except they do the contest near the end. Then at 8 o’clock, I just started my own show out on Fire Island at the Ice Palace.

So you’re following Porsche?
I follow Porsche, and I open for Shequida. Porsche has been there for 10 years, and Shequida is close behind, so they already have a big following. I’m like the new girl on the block, and I’m just doing my thing. It’s been a really good show. A positive response, and I’m excited to do it.

With the fact that you’re so successful, what advice would you give to an aspiring new drag queen?
For all new, aspiring drag queens, I’d just like to say: Don’t be afraid to think outside the box. Especially now with social media, “RuPaul’s Drag Race,” it’s just really easy to go and copy somebody. That’s not being true to yourself. You’re going to get lost, and people will see right through that. They’ll say, “Oh, you’re trying to be like Bianca or Bob.” Just be yourself. If you’re a singer, go ahead and sing your song. If you are a dancer, go ahead and dance any dance that you want. If you tell jokes, go ahead and tell your jokes. If you’re not pageant pretty, go ahead and do something more avant garde. And it’s OK to switch it up and do both.

Is there anything that you’d like to tell your fans and followers?
Just thank you for being supportive, for coming out to the bars, especially now, because it’s been a really scary year. It’s a scary world that we live in. We can’t just stay home and hide and be afraid. That’s exactly what they want you to do. So thank you for continuing to go out, living your best life. That’s what I’m going to do. I will never cancel a show or not do something because of what’s going on in the world. What’s going to happen is going to happen. Our defense is being true to ourselves and being true to our community. I truly appreciate that.

That was very well put! What advice would you give to the younger Brenda Dharling?
I would have told my younger self—I feel like going through those times, especially being gay … I grew up in Connecticut. It was very suburban. I went to a Catholic school. I was clearly “that gay kid.” My dad was black, my mom was white. It was kind of awkward. “Nobody likes you.” But my mom told me everything is going to be fine. And it truly is fine. I would have been nicer to my sister, but now we’re best friends. You got to treat your siblings a certain way growing up. 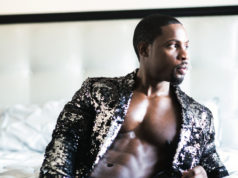