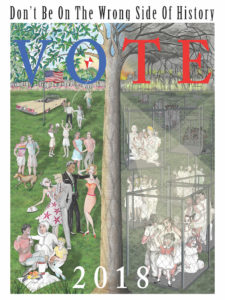 World-Renown Artist/Designer Garyk Lee is making an eye-opening profound statement with his “Get Out and VOTE 2018” poster encouraging those who are unhappy with the political state of unrest in the United States to do something about it!

Garyk Lee is a multi-dimensional character and personality who has the capability of putting his heart and soul into several projects at a time and doing them all well. Somehow, he is complicated within his talents, yet patient enough to be understood clearly. He combines his love for architecture and fashion to create some of the most impressive art in the world today.
His adult career started in the mid-eighties when he opened a Couture Salon on the fashionable Robertson Blvd in Beverly Hills…From there his Architecturally driven, sharp shouldered suits and Dramatic Gowns were seen on many celebrities such as Daytime Diva, Judith Chapman, Sean Young, Joan Van Ark and Elke Sommer. On Television and in print…The Late Mr. Blackwell, International Fashion Critic would often compare Garyk’s design work to Adrian, known for the signature look of Joan Crawford….Years later, while living in NYC, he created a Fashion Theatre for the Christopher Reeves Foundation at Raleigh film Studios showcasing his latest minimalist silk collection. Diner chairs included Sherry Lansing…CEO of Paramount Studios, movie mogul Steven Spielberg and Raleigh Enterprises owner, Mark Rosenthal. All the while Garyk loved his Art and developed his unique applications and created many beautiful murals from coast to coast, including a 3 story boutique hotel in Venice Beach where he personally operated a scissor lift to reach the 36” walls turning a boring generic building into an charming, Italian Palazzo.

Most recently Garyk is conceiving a new, sustainable loungewear collection and has released a new Docu-dramedy titled “Garyk Lee: A Retro Reflection” covering his UPS and DOWNS spanning 30 years as a fashion designer in the garment industry…Garyk plans to continue the “Animation meets Reality” storyline in his Youtube “How To” Show, Garyk Lee Style TV. 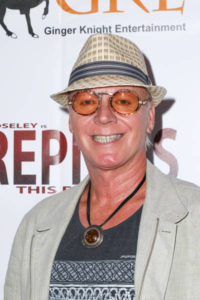 In his own words, Garyk Lee chooses sides:

“Growing up in a small oil town as the youngest in a conservative, Christian family, whose father was a managing engineer for the Oil Company that ruled the town…I had a very upper middle class, “Donna Reed” upbringing. It wasn’t until I moved to LA in 1980 I saw the real world…My acquired conservative political views slowly changed with time as I saw the Party that raised me slipping away from the moral basis it claims ownership of. Hypocrisy is probably the most offensive act of emotion and I deplore it. While we all may unknowingly have a case of it from time to time, it is the blatant in your face hypocrisy that makes me adamant about taking a stand. When I see the statistics that over half of our country doesn’t vote…I find that very disturbing…Wanting to play a part, or at least attempting…I created a poster to encourage youth to get out and vote as if your future depends on it, as it does! Seems it truly is a choice of 2 paths we have to go down. Over the last couple years, I am truly sickened when I see the direction America is headed and I encourage everyone to use their talent in a positive way to combat it.”

“As a gay man…I see us going back in time as do African Americans, Women, Hispanics or any other minority group. When I see us selling out to a foreign advisory or using what was supposed to be sacred as a means to herd sheep in a political direction…I have to do something…So I was given a gift of Art and I am attempting to use it in a positive fashion.”

Garyk Lee’s films, tv shows, artwork and designs may be found at http://www.GarykLee.com