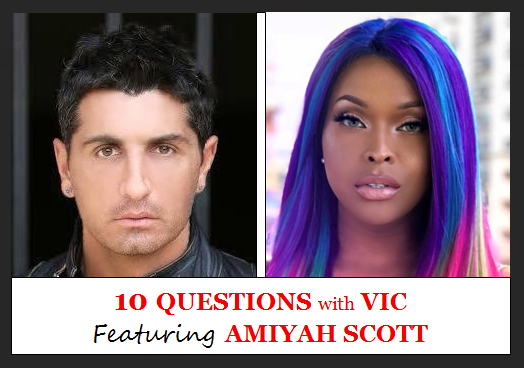 Amiyah Scott is a self-made American success story. She currently plays Cotton in the director Lee Daniels-created musical drama series “Star” on Fox, but her journey to success has been extraordinary and inspiring. She is the first transgender woman to tape for the “Real Housewives of Atlanta” and the third trans person to play a major character in a scripted TV drama series.

Her immense popularity prompted VH1 to crown her “KING” after reporting that she “is the first transgender model and actress to amass a large social media following on Instagram.” Scott has since added the title to her handles across all social media platforms, and her website is kingamiyahscott.com.

Modesty aside, how would you describe yourself?
I’m amazing, extremely intelligent and rare. I’m ambitious, charismatic, courageous and original. I’m aggressive, a leader with a pure heart and a strong mind. I’m classy, yet provocative. Enchanting. I’m perfect. Oh, and I’m humble (lol).

Is it fair to say that you are an actress and an artist who happens to be trans?
Sounds fair to me.

How is it playing the role of Cotton in Lee Daniels’ show “Star” on Fox?
It is what dreams are made of.

Do you feel that Hollywood limits your roles based on gender identity?
Yes, but we’re trying to change that.

In 2015, you taped four episodes of Bravo’s hit reality series “Real Housewives of Atlanta,” but your part did not air. How do you reflect on that experience?
I enjoyed filming, and I enjoyed the ladies. What is meant for you is for YOU! Obviously that wasn’t for me. Scripted primetime television seems to do me justice, though.

What does your average day look like?
It depends. Some days I wake up at 5 a.m. to arrive on set at 6:30 a.m. to film a long day of “Star,” while other days I can sleep until 2 p.m. and go shopping until my arms can’t carry anything else! My schedule is constantly changing, but what remains consistent is that my hair is ALWAYS done: in bed, on set, in a pool or even the late-night grocery store run. That wig will be laid, no exception.

How do you see the achievements of the trans community in the last few years and the challenges facing them?
I think we’ve come a long way, and I’m proud of that! Happy for that! But, we have a long way to go.

What is your favorite charity or cause?
TEA, Trans Empowerment of America, a non-profit I started to assist and uplift the trans community.

What project(s) do you have coming up?
My first book, “Memoirs of a Mermaid,” will be released in March 2019. It’s my baby. I’m so proud of it and excited to finally be telling my full story in my own words.

Tell me a secret—a good one!
Read my book, and I’ll tell you more than one!